Summary of Incidents in the Life of a Slave Girl

Incidents in the Life of a Slave Girl is a novel written by Harriet Jacobs, a woman who was born into slavery in 1813 near Edenton, North Carolina. This book is one of the many slave narratives written in early African-American literature. These types of narratives were a dominant literary factor used in the early works of African-American literature. The two main themes being portrayed throughout the narrative are the coming together of African and American cultures and the corrupting power of slavery.

Don't use plagiarized sources. Get your custom essay on
“ Summary of Incidents in the Life of a Slave Girl ”
Get custom paper
NEW! smart matching with writer

Slave girl displays the coming together of African history, tradition, and religion that came with their American origin.

This is shown mostly in the Christmas celebrations that the slaves partake in; they enjoy the western Christmas traditions but bring in their original tradition tracing back to their West African roots. They also sing spirituals, which, as many historians of the period have thoroughly researched, use biblical themes and allusions that allow the themes of their own stories and sufferings to come as one and show what derived from their African past.

Slaves also performed dances that drew on western and African traditions and rituals.

Slave language was a symbol of English and the African dialect. Through the cultural differences, slaves created meaning for themselves despite the nature of their harsh lives. It is impossible to explain how terrible slavery was for slaves. Many were brutally beaten, raped, forced to work in horrible conditions for long periods of time, deprived of family connections, and had to deal with drastic weather and little or no food.

Harriet’s story gives a sense of wickedness and corruption of the slave system that would eventually cause a harmful war which will prove to be unjustifiable.

However, her book can be cherished in that it speaks to another problem with slavery. It’s just as corrupting for the Caucasian people. That being said, the entire South and even the North were affected by the spread of slavery. At the beginning of the book, Linda starts her story at age six. She’s a joyful kid, living with her mom and dad, both of whom are skilled, educated, and light-skinned. The next few years are all right, too. Her mom dies, but she goes to live with her mother’s young mistress, a pretty nice lady for a slave owner who teaches Linda how to sew and read.

When all of that is over things don’t go too well. After her mistress dies, twelve-year-old Linda has to go live with a new mistress, five-year-old Emily Flint. Having a five-year-old mistress is a little weird, but what’s even worse than Emily’s father is a fragment. When Linda first hits puberty, Dr. Flint becomes very heated at the moment. He whispers nasty things in her ear, writes extremely dirty notes, and even built a cabin to be their love nest. So, Linda wasn’t really into this kind of stuff. Linda made up a plan. If she has to have sex with someone, it’s not going to be Dr, Flint.

It’s going to be Mr. Sanders. The idea is that she’s going to get pregnant and Dr. Flint is going to be grossed out that he sells her off. Her plan is going well and works right up until the point where she realizes that Dr, Flint is even crueler than she thought he was, He was highly uninterested in selling her off. On top of that, he consoles himself with the thought that at least her child is going to be his slave. Eventually, Dr. Flint gives her a chance by upping the stakes. He proposes that if Linda agrees to have a sexual relationship with him he’ll set her and her two children free.

Her other option would be to work as a field hand on Dr. Flint’s sons’ plantation. Linda has devised a plan. She declines the offer of freedom and takes the plantation offer. One month later, she’s out of the plantation and right into a crawlspace in her grandmother’s shed, where she can look out every now and then to see her children. The problem is the space is so small that she can’t stand up all the way, but she can tell Dr. Flint will assume she’s gone somewhere up north and might sell her children out of revenge. He refuses to give up on Linda.

He makes a trip after trip to New York to find her. He harasses her friends and family or news on Linda and he keeps her children right by his side, thinking that she’d come out of nowhere to come back or them. This search goes on for seven years. After some time passes some group of friends and family members help Linda escape to New York. There in New York, Linda works for a lady named Mrs. Bruce. She hears about Dr. Flint’s behavior that remained horrid even until the day he died. He will leave Linda and her children to a new master who is looking for them too. When Mrs.

Bruce here’s this she tries to come into the situation and arrange for Linda’s freedom to be bought and her children or a small sum of money. Incidents in the Life of a Slave Girl is an outstanding book. I can only imagine what Linda went through in those dark times. I would recommend the book to people ages sixteen and above because some of the things said are almost too brutal for anyone who is under a certain age to read. “Slavery is terrible for men, but it is far more terrible for women. Superadded to the burden common to all, they have wronged, and sufferings, and mortifications peculiarly their own.

” (Chapter XIV) This quote was a very important offering to the literature of slavery. It showed her model of slave women. It is obvious that when Linda understood the fate that she was doomed to, she was more than upset. She went through many different struggles in trying to keep her stature as a woman. That’s why I respect her. Throughout all of the things she was forced to go through, she never allowed her master to violate her but underwent an enormous amount of stress in attempting this great deal.

When Dr. Flint sensed that Linda was becoming a woman and that she may drift away from what he wanted, he proposed to move her into a small cottage far from the plantation in which she worked, to ensure his complete ownership of her. She refused to let him have a say in the situation. The author knew that her story was nowhere near ordinary. What the book left out that should have been included was that Linda probably was more of a fighter and wasn’t recognized as much as she should have been.

In my opinion, it was written as if she was weak when she seemed more of a fighter who wasn’t going to let anyone get in the way of her and her freedom. In conclusion, Incidents in the Life of a Slave Girl is one of the many successful slave narratives written in the 1800s. Slavery was a key factor throughout the narrative and time period. The two main themes that are shown throughout the story are the coming together of African and American cultures and the corrupting power of slavery. In the book, “Linda” is being talked about most and her struggle as a slave is being reflected on.

The book’s strengths were that it was very well descriptive when talking about everything that was going on and went even more in-depth to give the reader a better sense of the different situations in the story. I would recommend this book to anyone who is of age in a heartbeat. This book allows you to get another feel of how slavery was back in the 1800s. I find it fascinating that Harriet Jacobs shows the state of the slave system and displays how corrupt it is while putting it out there. Harriet Jacobs wrote Incidents in the Life of a Slave Girl in order to present what she went through to the public.

She didn’t want people to feel sorry for her. This was for the tragic experience that she had gone through. This particular phase of slavery had generally been kept veiled and she thought the public ought to be made acquainted with the monstrous features that were being used. She took full responsibility for presenting the public with the veil withdrawn. Incidents in the Life of a Slave Girl is a book that was well written and I would advise anyone who loves to read or even people that don’t like to read to take the time to read the book whenever they have free time because the book is amazing.

Summary of Incidents in the Life of a Slave Girl. (2020, Oct 30). Retrieved from https://studymoose.com/summary-of-incidents-in-the-life-of-a-slave-girl-essay 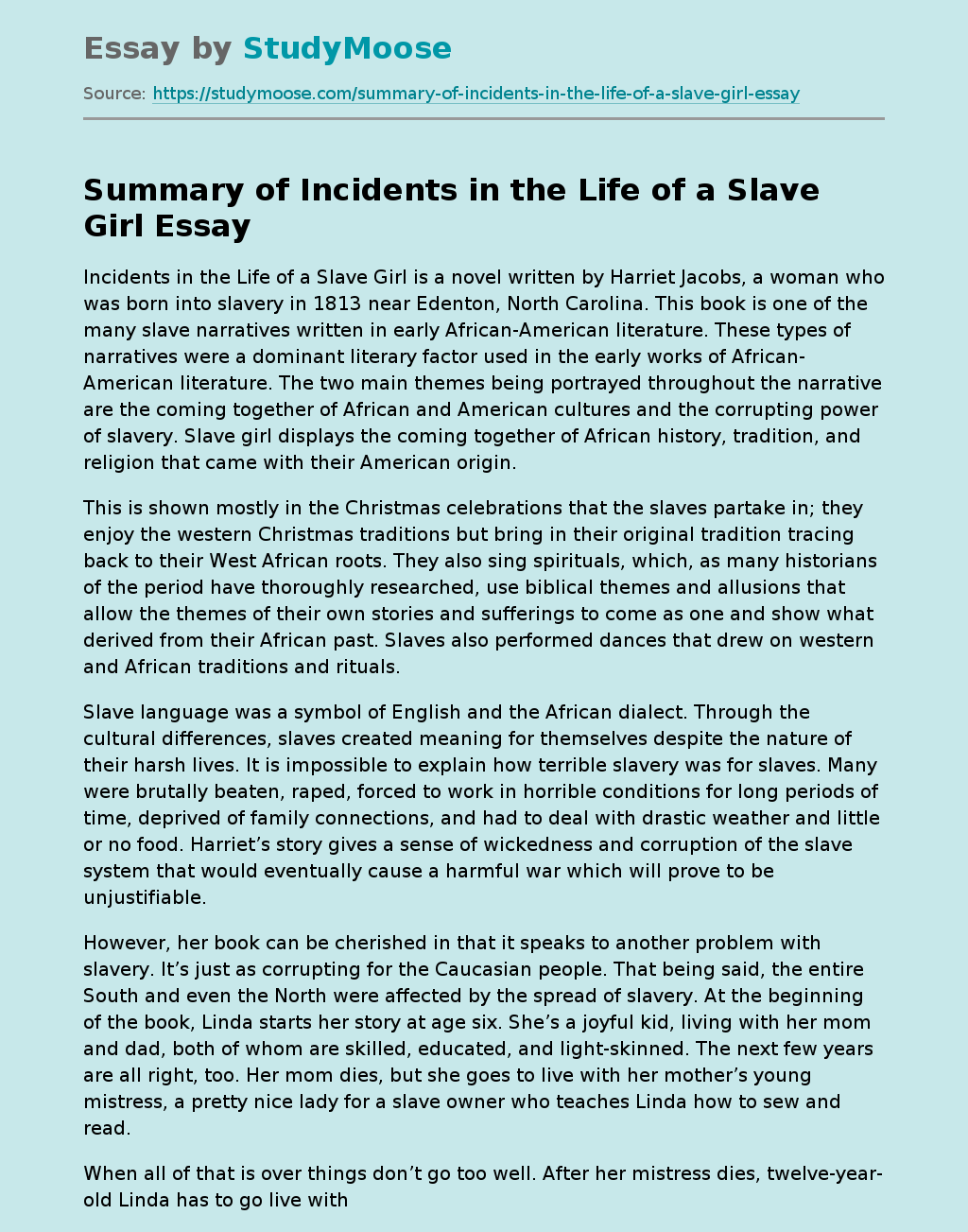