Don't use plagiarized sources. Get your custom essay on
“ The greatest development of the 20th Century in the Naval Service is the aircraft carrier’s rapid response capability ”
Get custom paper
NEW! smart matching with writer

First, the mobility of the aircraft carrier provided throughout the 20th Century was unsurpassed. A major aspect of mobility is speed. In WWII, Vietnam and the Gulf War, the carrier demonstrated the ability to move at superior speeds to all other ships in the fleet. Their capability to travel at speeds in excess of 30 knots makes this asset extremely mobile in response to any attack. VADM John Nathman points out that the sustainability and survivability of the aircraft carrier is also an overwhelming advantage over any smaller ship [Association of Naval Aviation, article by VADM John Nathman].

While it may be true that some very small ships are faster, a further discussion will show the aircraft carrier far surpasses any small ship with respect to total mobility. As Carl Conetta and Charles Knight point out, under emergency conditions carriers could be rushed into service. Given several days to prepare and assuming a top-speed transit, one carrier at least could be in the Far East within 12 days [“Alleged Carrier Gap is Out to Sea” Project on Defense Alternatives, Briefing memo 15, April 1999.

] No other ship with the assets the carrier brings to bear can match that.

Another mobility aspect is the constant presence worldwide through pre-positioning of the aircraft carrier, especially throughout the later half of the 20th century. In any response to crisis, the importance of have a warship close to an area of conflict can not be overemphasized. With systematically scheduled deployment rotations, an aircraft carrier is continuously deployed to Fifth Fleet in the Arabian Gulf, Sixth Fleet in the Mediterranean Sea and forward deployed to 7th Fleet in Japan, providing support to conflicts in regions worldwide. In addition to being well positioned throughout most of the world, the aircraft carrier can be moved within an operating area in a moments notice.

“Critics suggest that the sheer size of our aircraft carriers makes them vulnerable. Navy planners concede that it would be difficult to escape a well-placed nuclear warhead. But aircraft carriers are less vulnerable than land bases because they’re mobile.” [Popular Mechanics article, Show of Force; VADM Ed. Martin]

Sustainment is also a large part of what makes the aircraft carrier mobile. When deployed, the carrier is able to conduct sustained operations at sea with an endurance load of up to 75 days without replenishment. With sustained air operations, the endurance load is decreased due to refueling, however, a carrier can stay at sea in an operating area for over 100 days with combat logistic support ships readily available. This makes the aircraft carrier a particularly useful asset that can bring a devastating arsenal to the fight.

Power is another important aspect of rapid response. Aside from the SSBN, the vessel that can deliver the most powerful blow to an enemy is the aircraft carrier. Its ability to launch aircrafts carrying numerous guided missiles, responding with power to a surface or land based targets is not available from any other ship. Since World War II, the U.S. Navy has centered its battle groups around the aircraft carrier, with surface vessels playing a supporting role. It can be argued that the long range tomahawk missile is a more versatile and powerful weapon, but the U.S. has relied much more heavily on the power delivered by the aircraft carrier over the 20th century. The battles fought with the aircraft carrier far out number the instances of tomahawk weapons use from guided missile cruisers and destroyers.

Another often overlooked aspect of power used in rapid response is the power of information. The aircraft carrier is equipped with the latest intelligence gathering technology, surpassing the capabilities of all other at sea naval assets. Additionally, since the carrier is the center of the battle group, the surface, undersea and air picture can be found in one spot.

An integral component of the carrier air wing, the E-2 Hawkeye uses computerized sensors to provide early warning, threat analyses and control of counteraction against air and surface targets [Article, Wikipedia.com; no author given]. The E-2 Hawkeye provides over-the-horizon data links to the carrier, for the very best technology in early warning detection and information gathering.

The power delivered by the carrier based F-14 Tomcat and the F/A 18 Hornet have been the largest display of power the carrier has delivered. The ability to launch these aircraft at a moments notice in response to any threat provides the Navy with the greatest advantage over other surface combatants. The damage imposed on enemy forces from these aircraft is quick and devastating.

One may argue that the greatest development of the 20th century in the Naval Service was the submarine. The 20th century was a time period when our Navy responded to crisis rather than used a first strike weapon. That fact stated, by looking at just the number of times the carrier was used by the U.S. as a rapid response weapon, it is evident the aircraft carrier is the greater development. Indeed, the vast capabilities the nuclear submarine has delivered throughout the 20th century to U.S. Naval forces significantly advanced our Navy. The submarine, however, simply does not offer the wide range of capabilities the aircraft carrier delivers.

In conclusion, there have been many technological, engineering and other human developments which have provided major contributions to our Navy’s ability to respond to crisis quickly. Surface ships, submarines and weapons advancements have all been well documented. The greatest of all developments in the naval service in the 20th century is the rapid response capability of the aircraft carrier.

The greatest development of the 20th Century in the Naval Service is the aircraft carrier's rapid response capability. (2020, Jun 02). Retrieved from https://studymoose.com/greatest-development-20th-century-naval-service-aircraft-carriers-rapid-response-capability-new-essay 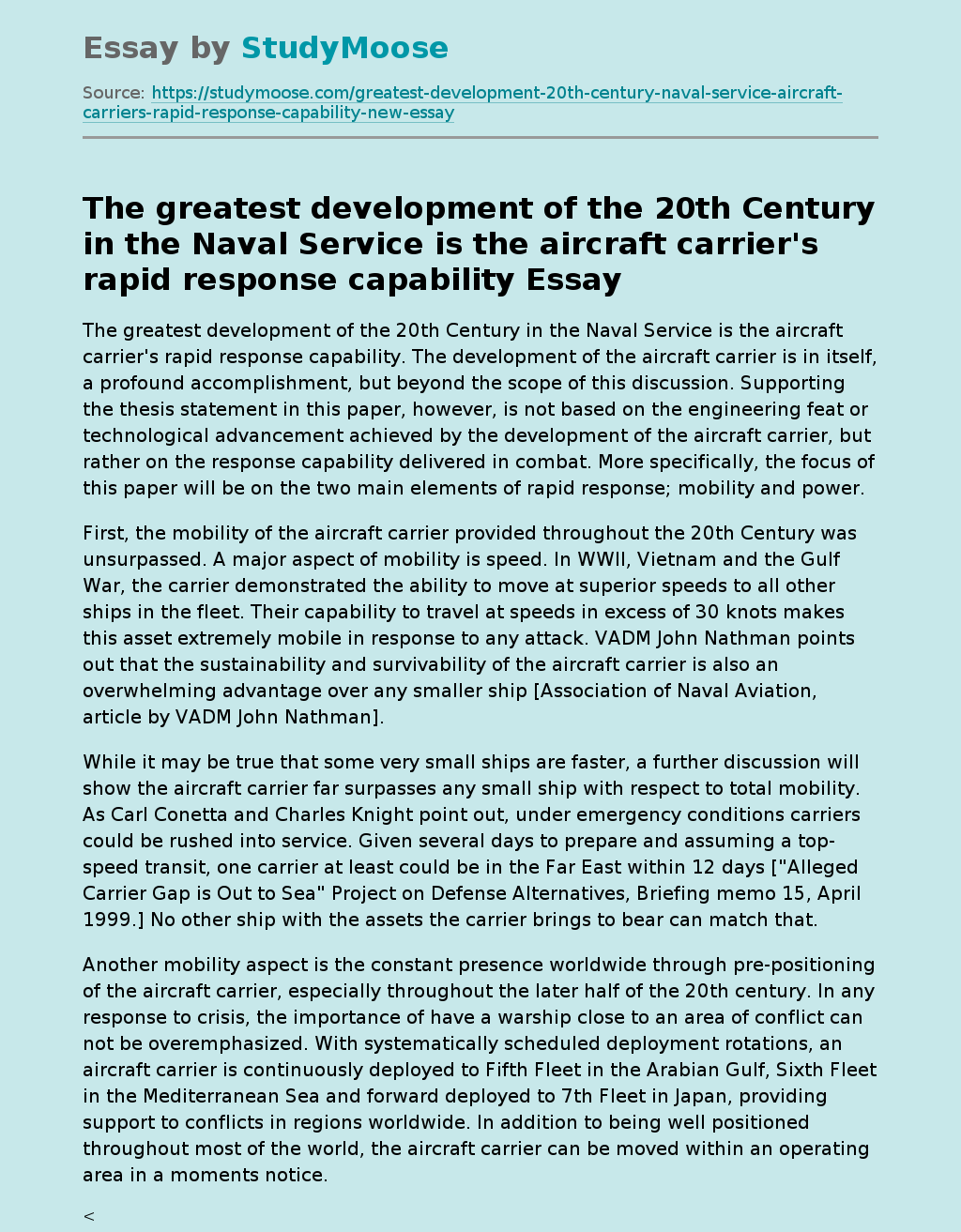