Given the current and expected market conditions, the financial department of the Ocean Carriers Group is to evaluate the potential revenues and expenses of commissioning a new capsize ship for cargo transportation in order to meet a received demand for lease. A recommended approach would consist in analyzing the expectations for the world economy, trends in world trade and potential contracts; however, an estimated time of service should be assigned in order to predict future cash flows.

In January 2001, Mary Linn, vice president of Finance for Ocean Carriers, had to decide whether to accept an offered leasing contract for the duration of three years.

In the event of acceptance of the above-mentioned contract, the profits of the company would depend on the agreed hire rates, operating costs, ship depreciation and inflation. After the closure of the contract, further income would be evaluated based on expected market daily hire rates. The conditions for the proposed lease are shown in exhibit 1.

The duration of the leasing contract is quite short so the company has to analyze whether the investment as a whole will prove to be profitable even after the closure of the contract. In order to do so, they will have to take into account the fluctuations of the daily spot rates in the short and long terms, as well as existing differences in taxation policies within its offices in Hong Kong and in the United States. Last but not least, the company has to question the tenability of its 15-year policy.

Daily spot hire rates are predicted to fall in 2001 and 2002 due to an increase in the fleet size (63 new vessels are scheduled for delivery) and expected stagnation in iron ore and coal shipments. Iron ore and coal imports are very important for the company because they are about 85% of the cargo it carries every year. Therefore, due to this future stagnation the company will face a weak market position, resulting in lower daily spot hire rates.

The company used to scrap or sell ships just before their 15th year of navigation to avoid paying for maintenance expenses related to the 3rd special survey. According to our calculations presented in the Exhibit 2, scrapping the vessel before the 15th year is not recommended. Results show that the NPV of a ship after 15 years is higher than the scrap value of 5 million dollars.

Thus, we advise the company to keep the ship longer than 15-year period, since operating the vessel over a longer period will earn additional profit and the ship can be scrapped some time later, granting the same million dollars. However, there are few factors that signal why company might be willing to get rid of the vessel. Firstly, if the company’s priority is to keep a young fleet of cargo ships, operating ships older than 15 years may not be the optimal choice. In fact, older ships are riskier and are less efficient.

Secondly, due to low demand for older ships, leasing the same vessel in future might be an ineffective venture.

It’s important to understand why we presented two columns for 2017. First column shows the numbers in the case of operating a vessel for 15 years, whilst second column shows the values in case ship was to be operated for a longer period. Another important fact to consider is that in the first scenario, when the company operates ship only for 15 years, we excluded the capital expenditure for 2017 related to the survey, Whilst, in the second scenario, while operating the ship for more than 15 years, we added the yearly capital expenditure back. We made an important assumption; we did not include capital expenditures linked to the last special survey, because we assumed that the company is scrapping the ship just before the special survey is conducted.

In conclusion, keeping in mind what we demonstrated before, the company should invest in the production of the new vessel only in Hong Kong and should not scrap it after 15 years, because its NPV will still be positive. 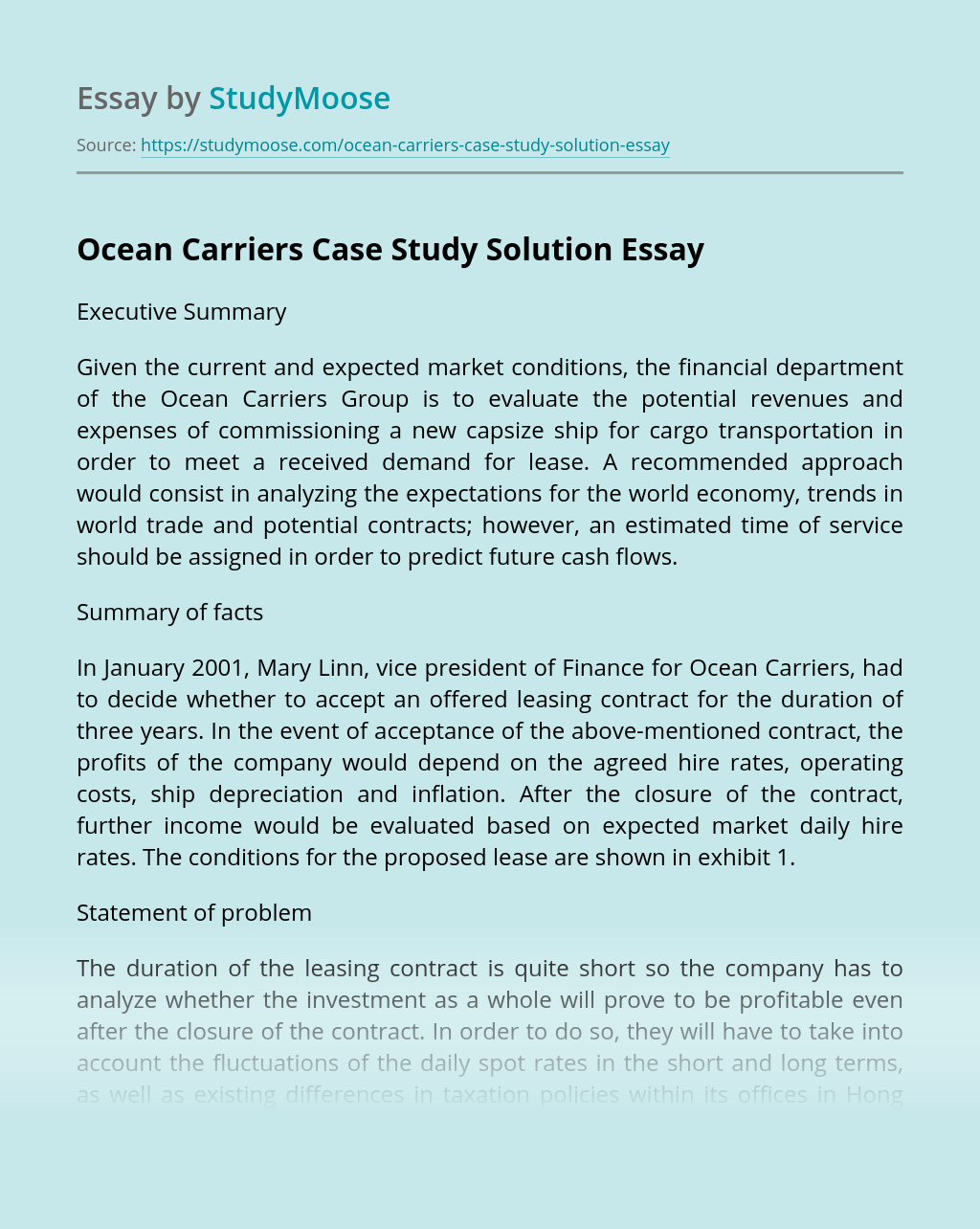 Executive Summary Given the current and expected market conditions, the financial department of the Ocean Carriers Group is to evaluate the potential revenues and expenses of commissioning a new capsize ship for cargo transportation in order to meet a received demand for lease. A recommended approach would consist in analyzing the expectations for the world...

There are two accounting techniques that companies use to report revenues and expenditures. The 2 approaches are the accrual basis and cash basis. The difference in the accounting processes will fundamentally change the way the company reports its money, so a choice must be made prior to tape-recording any transactions. Accrual Basis Accounting Accrual basis...

Principles of Accounting II Cost Accounting Accounting is the accumulation and aggregation of info for decision makers including administrators, traders, authorities, loan providers, as well as the general public. Accounting systems impact behavior and administration and have effects across divisions, companies, and even nations. This report will provide the reader a knowledge regarding cost accounting....

The calculation of the straight line method of depreciation is by taking the cost of the item minus its salvage value then dividing that figure by the expected year’s life cycle of the item. This is a non complex calculation and it reduces net income and the equal amounts of depreciation are deducted from every...

The intangible assets section of the balance sheet