They make assumptions that are most likely not true. They make assumptions from hear say only. You need to experience it, before you judge. Lauren Border’s negative outlook on the Greek system is mistaken, because she overlooks the positives like sisterhood and brotherhood, scholarship, and leadership, and what they have to offer. In “Pledging to never rush: a criticism of Greek life at Tufts”, published in The Tufts Daily, student at Tufts University Lauren Border writes how she is against the Greek life establishment at Tufts.

Don't use plagiarized sources. Get your custom essay on
“ Greek Establishment and Cultural Identity ”
Get custom paper
NEW! smart matching with writer

She is also very against the hazing aspect on both sides of the Greek system. Girls’ egos are shut down, and men have to prove something, just to be part of something. She is stating that you can feel belonged to something and not have to partake in any of these things. In the article she states, “I am convinced that Greek life usually does much more harm than good.

” She wants a change at Tufts and she is hoping that this article will make people wake up and see that there are other options out there. Border’s opinion on he Greek system lacks credibility when she points out the flaws of the Greek system. For every point she makes, she does not have any proof to back it up with. Also Border makes all of her judgments based off of the Tuft University Greek Life, when in reality not all Greek Life is the same on every campus nationwide. She is judging without knowing. Unlike Border I am currently part of a Greek establishment and it is the best decision I have ever made. I have only been in the house for three months, and I have experienced things I don’t think I would have ever experienced if I didn’t join.

I don’t know if it’s because I go to the University of Idaho, but some of the stuff she mentions are not true. For example, Border states in the article that girls have it way worse in the Greek system than guys, but here at the University of Idaho, it’s the complete opposite. Absolutely no hazing is allowed, and if the house gets caught it will be shut down. No exceptions what so ever. There are many benefits for joining a Greek establishment. Border only looks at all the negatives, and doesn’t even bother to consider the positives.

One of the multiple benefits for joining a Greek establishment is friendship and sisterhood/brotherhood you gain. When joining a house you have the advantage of meeting people of various backgrounds with both different yet similar interests. The ideal of sisterhood/brotherhood is the principal foundation upon which each fraternity/ sorority is built and from which you will receive the greatest benefit. You will always have people pushing you to be the very best you can be, and will be there when the going gets tough.

Another benefit for joining an establishment is the academic side of it. One of the main purposes of the fraternity or sorority community is to develop and encourage high scholastic achievement among the members. Within the house you have the opportunity to take advantage of peer tutoring, upperclassman counseling, and chapter study hours. Those chapter study hours give the newest members a good sense of the change of study habits they are going to have to become accustom to in order to be successful in college.

Also, there is the fact that your brothers/sisters can offer all kinds of academic advice after their experiences. There are so many benefits in joining a house, but I am only going to mention one more. When you join a fraternity or sorority you will be offered the opportunity to take on a leadership position. Leadership positions range from president to vice president of finance all the way to purchase chairman. Everyone in a fraternity or sorority is a leader, whether you’re an officer, on a committee, or just a participant. You will learn by doing.

You will learn how to manage a budget, run effective meetings, speak in public, and motivate others. These are skills that will help you not only within the university but throughout your life. These days it takes more than just a degree to get a job, it takes leadership experience. Being a part of something that has a lot of meaning behind everything is an amazing feeling. Being a part of a sorority/ fraternity and forming that sisterhood/ brotherhood is such an amazing thing. You know people have your back all the time, and you know you are not alone.

Everyone is going through the same thing. Learning life skills while being part of a Greek establishment will help you so much later down the road. Whether you hear good or bad things about joining a house, give it a chance. You will never understand the meaning behind everything if you don’t give it a try. Lauren Borders negative outlook on the Greek system is mistaken, because she overlooks the positives of what it has to offer. Everything was based on hearsay and personal opinion. She had nothing to back up any of her points. 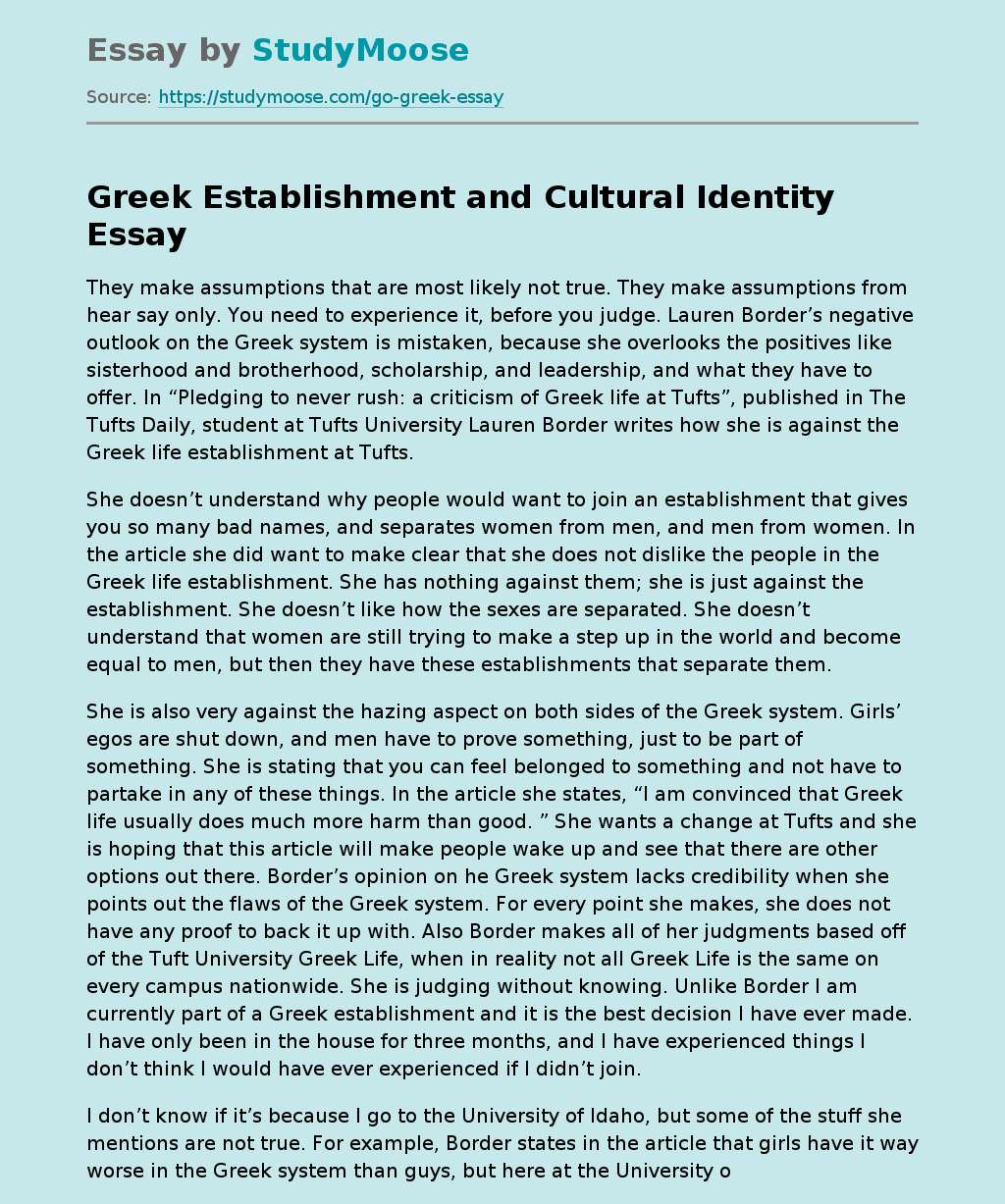