An English sociologist Ralf Dahrendoff said when the twenty-first century was coming to an end; a power seems irresistibly control the life, hope and fear of human beings—–Globalization.(Shao, Zhi Su; Ralf Daherndoff) Globalization is an unavoidable trend. It is happening now, not in the past or in the future. It is full of variableness so we have to seriously think about the problem that is globalization leading us into a happy world village or a dangerous concentration camp.

There is a great deal of theories relative to globalization present that include positive and negative aspect.

Don't use plagiarized sources. Get your custom essay on
“ Does globalization enrich culture or destroy culture? ”
Get custom paper
NEW! smart matching with writer

On the positive side, many researchers thought globalization could bring a great and new opportunity to whole world and lead the countries around the world get more free trade and promote the interchange of each country’s culture. On the negative side, they thought globalization will certainly increase the gap between poor and rich and make it tend to extremes. At the same time, it causes the countries which have lower economic position further lose independence in the political and cultural aspects.

Also there are some people said that under globalization culture will tend to Americanization.

Culture is the fundamental essential of construct a society, the member of a society not only learns the manner of life but also obtains the purpose of life from the culture. Local society was originally the primary source of culture establishment but under the development of globalization, the global culture and local culture mutually competes and challenge (coexistence or integration) to the manner of life and the purpose of life of the members of society.

For the local society, the effect and the impact are very serious. Localization was more and more emphasized because of the effect of globalization. The local culture is gradually changing; some are enriching but most are disappearing especially language. Language is the foundation of culture, if language disappears that implies the thinking and knowledge of human beings becoming withered and weak.

“Globalization” this vocabulary was introduction by an English economist N. Angell in the 1910. The researches of globalization were started in 1980 then accompany the Soviet empire collapse and the end of the cold war reached the climax in 1990. The definition of globalization is difficult to unify because the standpoint, viewpoint and methods of researchers are different. But some fundamental characteristics have been accepted.

1: Globalization is the result of high technology developing too rapidly, especially the revolution of information. It leads the activity of humans increasingly over the limit of space-time. 2: Economic resources and the essential factors of production (labour, funds, products, services and technologies) are more and more across borders and in the scope of whole world interchange freely and completely. 3: Accompanying globalization, the politics, society, culture, thinking, security and environmental across borders and influence each other and then tend to homogenization. Many people fear that local will be lost in world-wide process of Americanization.

What is culture? Does culture mean anything important for us? Why when globalization brings an unprecedented and overall progress do some people say that our cultures are disappearing? The concept of culture seems too difficult to make a definition, when we open our eyes; everything is culture, clothes, buildings, food, words and thinking. However, culture plays a very important role in our routine life, we can’t ignore. The concept of culture includes the source of history and with the traditional thinking has closely relation. Also it is a part of the structure of a society. According to English anthropologist Malinowski, culture is a set of inherited things which are goods, currency, process of skills, thinking, custom and worth. (Mei-Ling Fang; Malinowski )

In the Malinowski of view, you can not think the culture and the structure of society separately. But the anthropologist Firth makes an obvious demarcation between culture and the structure of society. He said culture is the resource which accumulates over a long period, it includes substance’s and non-substances’ constitution essential and inherited, used, transformed, increased and communicated by some group; it is a kind of behaviour learned from society. (Mei-Ling Fang; Firth) The concept of culture seems to imply a symbolize system which is everybody shared in a particular society, namely semiotics. In brief, culture is a way of life and attitude.

In the past, local culture symbolize system and some institution such as schools, families and religion provide the members of society with the necessary cultural life such as knowledge, sense, worth and so on. Following the development of globalization, more and more necessities of cultural life and are made from other countries and the mass media come into our local society so that the local members of society can use it at will. The cultural production manufacture and are overrunning the world but the local members of society still live in the same space and time so more and more things can absorbed by each member of society. This causes the symbolic density of social life to go up.

The Benefit for Culture from Globalization

Globalization brings us a great progress on technology and science and our lives have been made more convenient by them. At first, science and technology have cleared up many matters that were mysterious to us in the past. For instance, we know that thunder and lightning are not caused by gods being angry, but are normal natural phenomena. As a result, a large number of harmful superstitions have disappeared, and nobody regret their passing.

Nowadays electric lights have replaced the traditional oil lamps, and computers enable us to make quicker and more accurate calculations. Even more important is the fact that television brings the family together in the evening. On the other hand, science and technology actually help to the useful and pleasant parts of traditional culture. Take the celebration of Chinese Lantern Festival for example. Lanterns are now designed with modern technology and materials to make them more attractive, and they are powered by electricity, which is safer than candles.

As the latest product of the ‘technological revolution’, the internet has ushered in a new era of global information. There is no denying that the internet can vastly improve the efficiency of scientific research; it allows scientists swift access to all the data and research findings in their fields available worldwide. Moreover, as internet is as valuable as any material resource, anyone who has access to the internet has a competitive advantage in business over those who don’t. Last but not least, the internet has made personal communication both more convenient and more rapid.

Under Globalization, mass media go around the world. The mass media have a powerful influence in shaping our lives. We have come to depend on them for information and entertainment, and in doing so we let them affect important aspects of our life. The mass media are influential in the way they facilitates the spread of culture and lifestyle. The so-call ‘global youth culture’, in which one finds young people around the world display a common interest in music, clothing styles and films, is an example of the mass media’s enormous sway in this regard. A popular figure such as Michael Jackson world never be so well known were it not for the mass media’s extensive reach into every society on the global. 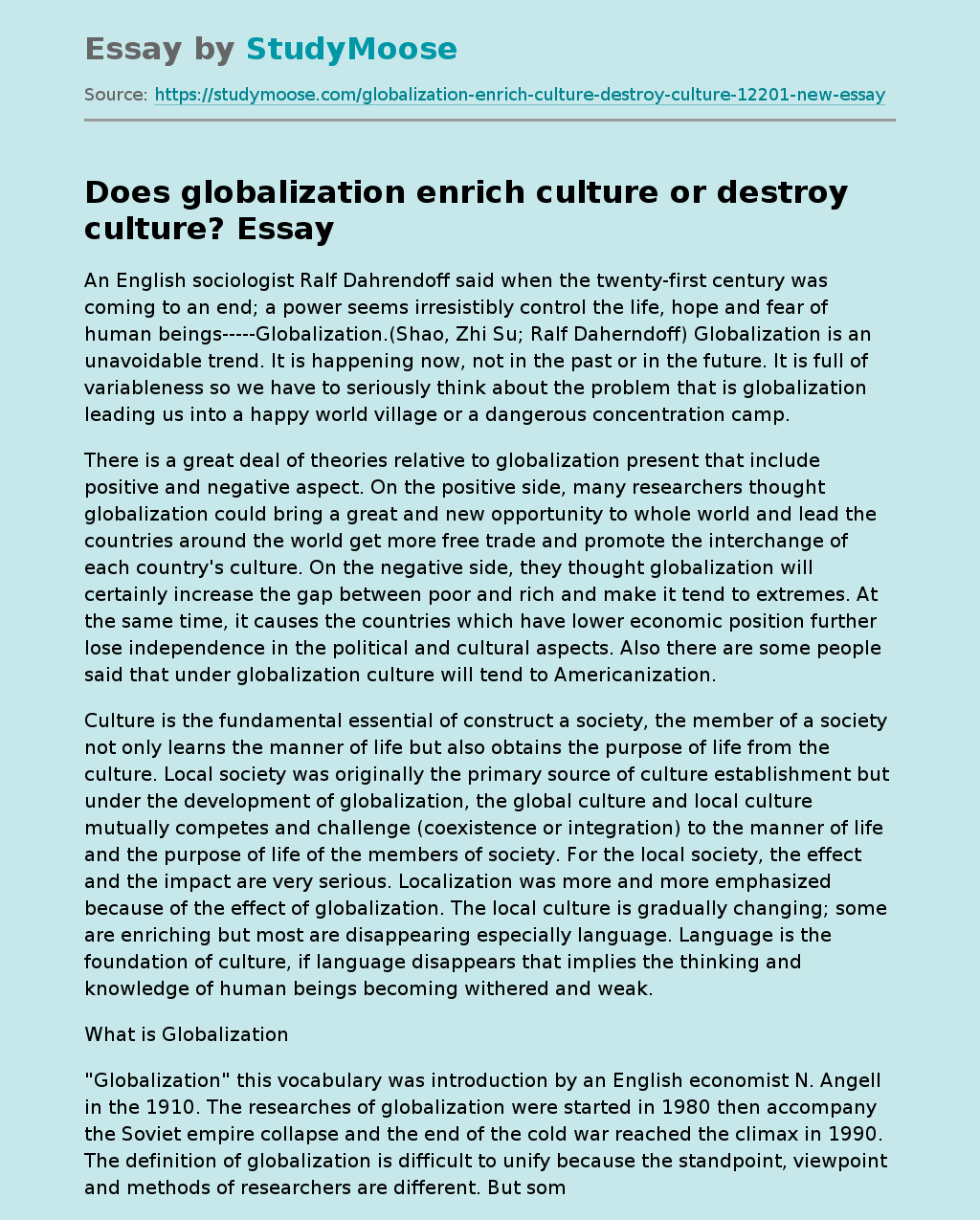