This essay will discuss the definition of globalization and cultural homogenization, and the popularity of Hollywood movies in China, the phenomenon of convergence of TV programmers between different countries and Japanese anime elements in video games around the world will be given as examples to demonstrate the homogenization of media culture.

Don't use plagiarized sources. Get your custom essay on
“ Globalization and Cultural Homogenization ”
Get custom paper
NEW! smart matching with writer

Culture includes many aspects in people’s daily life such as the economic, politics, media. According to Appadurai (1990), “The key problem in the global interactions today is the tension between cultural homogenization and cultural heterogenization”.

The cultural homogenization is the process that local cultures are changed or assimilated by the dominant outside culture (O’Connor, 2006). Globalization has its natural barriers like the differences in languages, geographical factors, religious and ethnics.

Neoliberalism advocates that business dominate the social affairs to make the national and international policies have a new order and the market can solve social problems by itself (McChesney, 2001).

As a consequence, the power of political constraint on economic activities and global trade barrier has strongly weakened. It is good for the world famous media firms to expand their markets in different countries to extract profit. For instance, Hollywood occupied most of the world’s media market. It becomes a main medium by which people in different countries to understand American fashions, customs, scenery and the way of life (Hoynes & Croteau & Milan, 2011). According to Su (2010), between 1994-2007, China began to import 10 to 20 foreign films every year.

Most of them were Hollywood movies. These Hollywood blockbusters caused unprecedented repercussion among the Chinese audience because these blockbusters could fit their aesthetic and entertaining need. At the end of 20th century, Hollywood films had occupied 70% of Chinese film market, but the nearly 100 films made in domestic just share 30% of the film market (Rosen 2002). With the rapid development of scientific technology, IMAX and 3D technology has been used in the film industry. The technologies further promote the Americanization in the world film field.

The movies like Avatar and Titanic are examples of this. Hollywood movies created visual miracle and achieve large box-office profits one after another in China, even around the world. In order to have more market share, Chinese film producer also focus on importing American advanced film technology or the cooperating with the American film making companies. Recently year, China also has its own outstanding films like Tangshan Earthquake, but some Chinese audience felt it likes a Hollywood blockbuster because of American visual effect technology in the film.

It is easier for people to get media sources from different countries online for entertainment. From the page design to the organization of the content and the various functions of scheduling, the designing of many website have a high degree of consistency. People prefer to watch high clicking rate programs in Internet. National TV station also promotes to make the popular TV shows in order to improve the audience rating. In the process of TV program making, cultural and art workers’ copy or clone becomes a safe and efficient way in media.

As a consequence, globalization makes media cultural homogenization a general form in media programs. For instance, the most influential media cultural phenomenon in 2012 is “The Voice”- a singing competition show began in the Netherlands to choose good singers from the public. Audiences were attracted by its novel and exciting competition mode. It had high click rating in the YouTube and achieved a great success in the world wide media industry.

TV stations in different countries like Chine, Australia, and U. S. also hold the same singing competition. “The Voice” has already become a media brand. Although the influence of this program in different countries are not the same, but the forms them themselves have strong homogeneous performance, the entire process of the programs from the beginning of the match to the final results are the same form which are borrowed from the western countries. The globalization also promotes the specific media firms became concentrated.

In order to reduce risk and improve the profit-making chance, the convergence and consolidation became more frequently (March & Olsen, 1989). In this process, seven media corporations dominated the world media market those are Disney, AOL-Times Warner, Sony, Viacom, Vivendi, and Bertelsmann (McChesney,2001). Some media corporations put the popular cultural elements in their own production and released in the world media market. This can also lead to the media cultural homogenization. Take Japanese anime as an example.

Because of its exciting story and exquisite character, it has large amounts of fans around the world. Sony is one of the seven major firms in the world media market. It is famous for its video games. According to Sinclair (2006), the releasing of the third generation of PlayStation brought Sony to the first place in video game industry. One of the unique features in its video products was the combination of anime features with their own video game product. Anime fans around the world also fund of the animation processing games.

That directly leads to the animate of games from different video game corporations such as the Xbox in Software, the Wii and NDS in Nintendo. In order to satisfy the visual need for the Chinese game player,some Chinese on-line game producers also put anime elements in their games. Globalization leads to the media market dominated by particular corporations. Because of their media products have the same contents, the world media culture also presents the trend of homogenization.

The trend of cultural homogenization is unavoidable especially in the media industry in the process of globalization. In the future, the world trade market is in a condition of full of challenge but also chance. All countries should mobilize various resources to develop public cultural, at the same time, people should follow the step of the times closely and understand and learn other countries’ cultural essences in a rational and correct way. 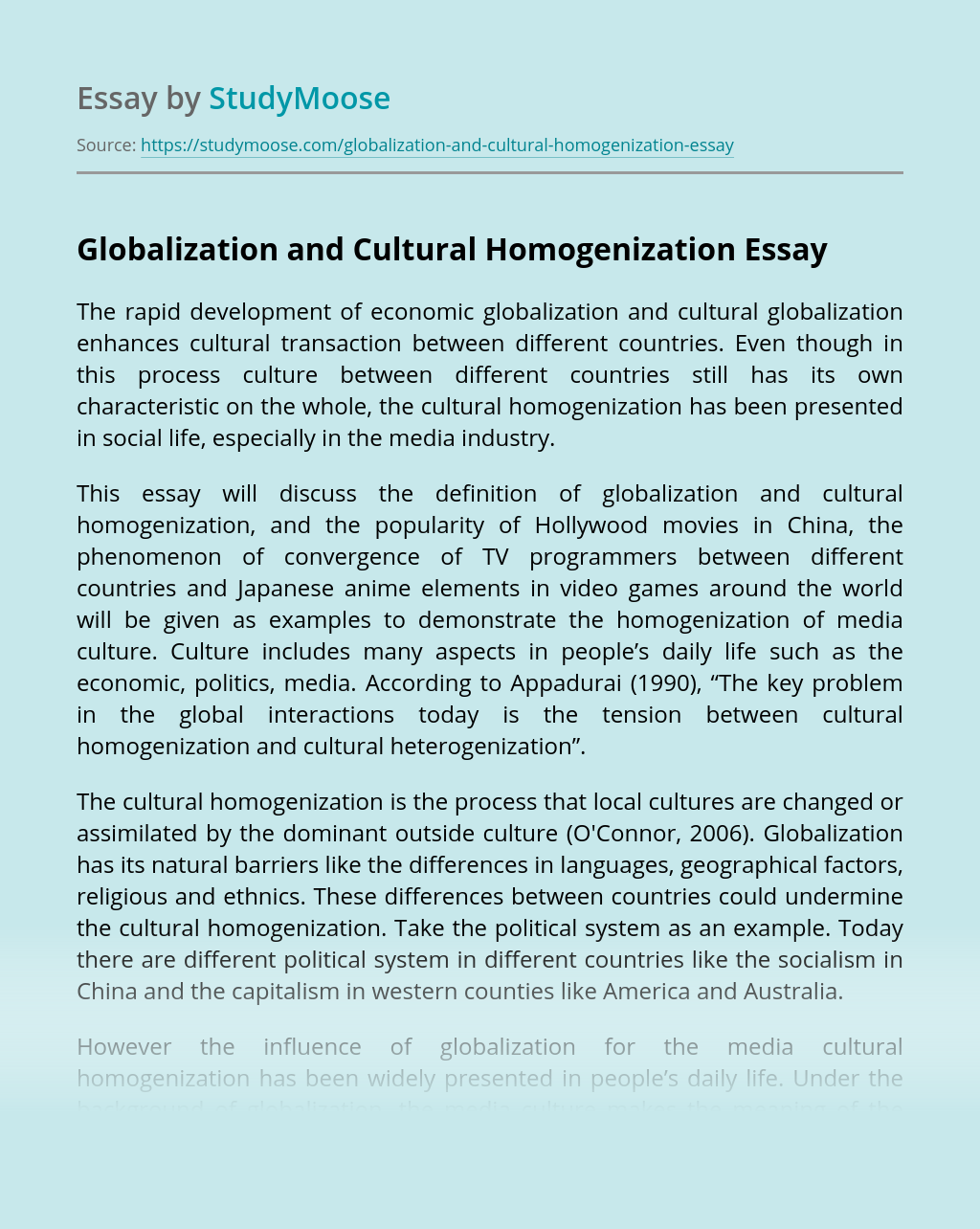