A. Background It’s almost always about international trade, foreign investment, capital flow and all the rest. But what about culture, identity, traditions and ways of life; do these things amount to anything? True, globalization has various manifestations. If viewed strictly from economic terms, then the debate delves into trade barriers, protectionism and tariffs.

Powerful countries demand that smaller countries break down all trade barriers, while maintaining a level of protectionism over their own. Smaller countries, knowing that they cannot do much to hide from the hegemonic nature of globalization, form their own economic clubs, hoping to negotiate fairer deals.

Turn in your highest-quality paper
Get a qualified writer to help you with
“ Effect of Cultural Globalization in Intercultural Communication ”
Get high-quality paper
NEW! AI matching with writer

And the economic tug of war continues, between diplomacy and threats, dialogue and arm twisting. This is the side of globalization with which most of us are familiar.

But there is another side of globalization, one that is similarly detrimental to some countries, and profitable to others: cultural globalization — not necessarily the domination of a specific culture, in this case Western culture, over all the rest — but rather the unbridgeable disadvantage of poorer countries, who lack the means to withstand the unmitigated takeover of their traditional ways of life by the dazzling, well-packaged and branded “culture” imparted upon them around the clock.

What audiences watch, read and listen to in most countries outside the Western hemisphere is not truly Western culture in the strict definition of the term, of course. It’s a selective brand of a culture, a reductionist presentation of art, entertainment, news, and so on, as platforms to promote ideas that would ultimately sell products.

For the dwarfed representation of Western culture, it’s all about things, tangible material values that can be obtained by that simple and final act of pulling out one’s credit card.

To sell a product, however, media also sell ideas, often one-sided, and create unjustifiable fascinations with ways of life that hardly represent natural progression for many vanishing cultures and communities around the world. There is nothing wrong with exchanges of ideas, of course. Cultural interactions are historically responsible for much of the great advancements and evolution in art, science, language, even food and much more. But, prior to globalization, cultural influences were introduced at much slower speed. It allowed societies, big and small, to reflect, consider, and adjust to these unique notions over time.

But the globalization of the media is unfair. It gives no chance for mulling anything over, for determining the benefits or the harms, for any sort of value analysis. News, music and even pornography are beamed directly to all sorts of screens and gadgets. This may sound like a harmless act, but the cultural contradictions eventually morph into conflicts and clashes, in figurative and real senses. Now days, globalization has spread out through all aspects of human live around the world. The globalization not only has been become a theory discussion but also the effect of it can change cultural identity and human perception.

B. Data Cultural globalization is the rapid traversing of ideas, attitudes and values across national borders. This sharing of ideas generally leads to an interconnectedness and interaction between peoples of diverse cultures and ways of life. The term “globalization” came to be widely used in the 1980s, but as early as the 1960s, Marshall McLuhan popularized the term “global village” to describe the effect that the ability to connect and exchange ideas instantaneously would bring to the world.

Mass media and communication technologies are the primary instruments for cultural globalization. Global news services such as CNN disseminate the same events and issues across the world including some of the most remote locations in the world. A terrorist attack in a small village school in the Northern Caucasus can hold entire households in Kansas spellbound. This internationalization of news exposes countries to foreign ideas, practices, and lifestyles. The development of computer technology — with its social networking sites, video sharing ebsites, blogging sites and various other permutations — has served to accelerate cultural globalization as there are no boundaries on the World Wide Web.

Advances in transportation have also facilitated physical travel to other countries, which in turn, has encouraged cross-cultural exchanges. Describing the relation between globalization and culture we can mention two intellectual currents that have been attempting to define it: the cultural universalism and the cultural particularism. These approaches try to identify a global identity. Here, where the paradox of Globalization relies.

As I mentioned above (on reference to the usage of media and technology by indigenous people to spread their message), it seems that the more these people are trying to resist from what they call “Globalization”, the more that Gobalization invades them and confuses its reality with their reality, giving shape to a sort of incidental by-product of globalization: globalization itself. Globalization is not a recent process. Although it is now where its scope and force is more evident than ever, globalization might have existed since the very moment the cavern man first thought on humanity integration.

I will summarize a historical overview of globalization as a concept on the following lines. Culture matters for globalisation in the obvious sense that it is an intrinsic aspect of the whole process of complex connectivity. However, it does not mean that culture is intrinsically more globalising on account of the ease of the ‘stretching’ of the relations involved and the inherent mobility of the cultural forms and products. Looking at the present phase of capitalist/imperialist globalisation all sorts of its dimensions are noticed.

The impact of multinational corporations, the international division of labour, the increasing phenomenon of labour migration, financial and commodity trading, the significance of trading regulatory agreements, financial prescriptions at global level, and bodies such as the World Trade Organisation, World Bank and IMF – all testify to the globalisation of ‘material exchanges’ involved in economic relations. Obviously, there are lots of instances in which production, exchange and consumption of commodities do remain relatively local activities, but a trip around the neighbourhood will quickly reveal how much it is not a local produce.

Software productions in India will cater to the markets in USA, UK and Australia, intensive banana production in Latin American continues to satisfy the needs of European and American markets and make year – round availability-show and these local based productions act as constitutive of the global process. Equally, in the cultural arena symbolic exchanges float free of material constraints – as books, CDs, celluloid, electronic flows on to TV screens and Videos and so forth constitute the cultural aspect of these globalising process.

It does not mean that culture predominates in the globalisation process. One way is to think about the consequentiality of culture for globalisation, then is to grasp how culturally informed ‘local’ actions can have globalising consequences. A world of complex connectivity (a global market place, international fashion code, an international division of labour, a shared eco-system) links the myriad small everyday actions of millions with the fates of distant unknown others and even with possible fate of the planet. All these individual actions are undertaken within the culturally meaningful context of local mundane life worlds in which dress codes and the subtle differentiations of fashion establish personal and cultural identity. The way in which this ‘cultural actions’ become globally consequential is the prime sense in which culture matters for globalisation. To be sure, the complexity of the chain of consequences simultaneously entails the political, economic and technological dimensions of globalisation.

But the point is that the ‘moment of culture’ is indispensable in interpreting complex connecticvity”6 . This is how a Western intellectual explains global consequentiality of ‘cultural actions’. Globalisation in its cultural dimension also discloses its essentially dialectical character in a particularly vivid way. There exists a cultural politics of the global arena which one can grasp by referring to the example of ecological consequences of local actions.

The Green movement slogan ‘Think globally, act locally’ suggests a political strategy motivated by a clear collective cultural narrative of what the ‘good life’ entails. This strategy involves the mobilisation of agents – increasingly via sophisticated media campaigns – to achieve institutional changes at a global level. And if such a strategy is sometimes successful, it is because it draws on and appeals to very general cultural dispositions more than engagement with scientific-technical arguments over environmental problems.

Commercialisation of media and the cultural symbols and artefacts and the global tide driving for profit using ‘culture’ as a commodity, constitute the modus operandi of ‘cultural imperialism’. It is, however, unhelpful to focus exclusively on the conscious active agency of individuals and the local direct impact of artefacts and objects in describing the glolbalisation of culture. Of course, cultural practices can be and are actively imposed in places distant from their original site of production.

Empires, in particular, stand as an important example of the extensive reach of new cultural ideas that are backed in their impact by the possibility of coercive force and the reality of political subordination. ’7 The process of the globalisation of culture is, however, more complex and varied in their forms and in the relationship between producers and receivers. Thus an important fact of this process is captured by reference to the notion of modes of interaction that is, the dominant ways in which cultural globalisation operates from imposition, through emulation to diffusion.

The idea of ‘Cultural Imperialism’ is connected with a further element of the globalisation of culture – the establishment of the infrastructures of cultural production, transmission and reception, and the extent to which cultural flows and processes are institutionalised , that is regularised and embedded across time and space. As with any form of power, cultural power cannot be mobilised and displayed in the absence of organisations that create, transmit, reproduce and receive cultural messages or practices.

These imply more than technologies, central as they are. For technologies must be displayed and operated by social organisations. Globalisation of culture, therefore, implies emergence of infrastructures and institutions of cultural transmission, reproduction and reception on a global

C. Review on A Problem We can see from the theory, based on the data above, that globalization is a term of influence which came from ‘the first world’ and affect ‘the third world’ in all aspect. Globalization of culture is the changing of imperialism that superior culture of western demolish culture of country fom ‘the third world’ gradually. It is done vey easy because the development of technologies and mass media spread out fast over world. These all cases affect on communication between each involved country. These are like a barrier of that communication. The cultural globalization will give many effects to that communication, or we often call it intercultural communication. 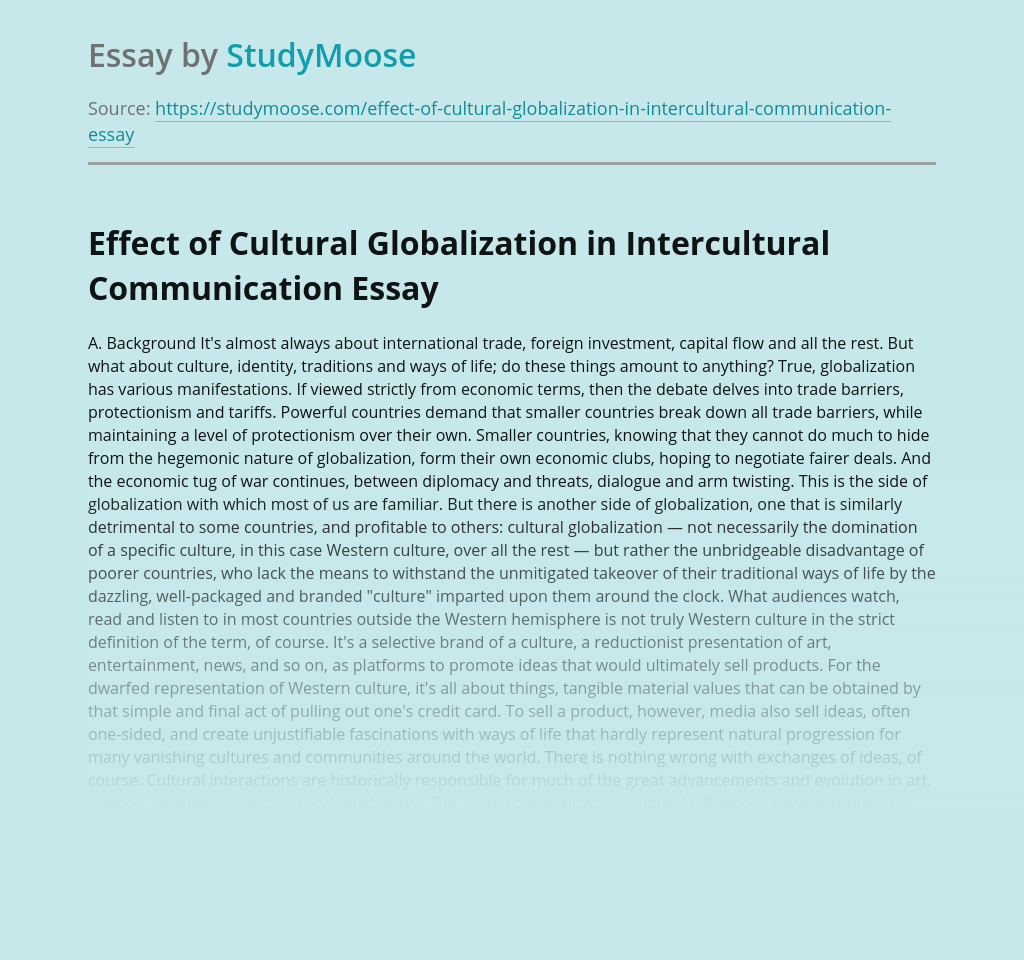 Turn in your highest-quality paper
Get a qualified writer to help you with
“ Effect of Cultural Globalization in Intercultural Communication ”
Get high-quality paper
Helping students since 2015
Stay Safe, Stay Original