In this sense it seeks to understand how people from different countries and cultures act towards each other’s, communicate and perceive the world around them.

Don't use plagiarized sources. Get your custom essay on
“ Intercultural Communication ”
Get custom paper
NEW! smart matching with writer

Many people in intercultural communication such like in business management argue that culture determines how individuals encode and preserve messages, what mediums they choose for transmitting and broadcast them, and the way messages are interpreted and understood. It all depends on the characteristics and the component on the culture itself.

It is also affected by the communication skill from the group of people and how they interact with each other.

These components are symbol, language, value, norm and belief. Culture define as a complex system of knowledge, beliefs, values, customs, behavior and artifacts that are acquired, used and shared by the member of the group of people in their daily lives.

In identifying how the complex system work we must know the important component in culture. Symbol is anything that meaningfully presents something that recognize by a culture. An example of a symbol is just like bald eagle that represents United States of America, or Kris represents Malaysia, Elephant represents Thailand folks.

Language is symbol system that used for people to communicate with each other in their country. But also certain language can be interpret by others which define whom that value and try to achieve a perfect concept of intercultural communication itself. Values are culture defined standards that people use as guideline in social interpretation, such as what to do is right and what they believe to be right in their daily practice. Norm is any establishment of rule and expectations that guides the behavior which means anything that a group of people usually do to maintain their behavior.

Beliefs are special thoughts or idea that people hold on trusting that it is true and never been wrong, and beliefs also clarify religion also make a culture different from he others. Culture also has the characteristics. There are seven characteristics of the culture and the first are culture is created and learned by group of people. In this group of people culture is shared between them. Culture can be transmitted from past and to the future means that culture can be passing down to generations. Culture is something dynamic and always changing by time following concept of how the world changes.

Culture prescribes behavior and attitude which means culture define and shape the behavior of the people in that group according to their prescriptions. Communication is a dynamic, systemic process in which meanings are created and reflected in human interaction with symbols. The process is ongoing and ever changing. It is contextual, always taking place in a specific location. Communication never takes place in a vacuum situation. When we do communicate with another human being, we can only infer what she or he is experiencing because no two human beings have the same experiences leading up to that specific communication event.

We are all born as white cloth. It is the culture we are born into that gives meaning to our experiences and helps us to define our world or how it is going to be. The meanings we give to events shape our world and fulfill our expectation. Our brain functions as an open system and we learn from each encounter and add to our system of knowledge from past and present events. Most of our culture is transmitted through unconscious communication acts and behaviors. These ideas are received by imitating, observing, and interacting with others, and we are not even aware we are receiving these messages.

We receive them first from our parents, then from siblings and others as the scope of our world broadens and as we meet more and more people each day. These events happened unconsciously and as we realized we already have it and learn it by heart. As a separate notion, it interprets situations where people from different cultural backgrounds interact to each other. Aside from language, intercultural communication focuses on social attributes, thought patterns, and the cultures of different groups of people.

Myth is something that is more sacred and the actors were sometimes gods or demigods that were popular in western countries. Legend is something, someone or an event that believed by the narrator and believed by the people to be true such in Malaysia, there is a tales of Mahsuri or Hang Tuah. Everybody knows that they were exist but the legends was written in the form that it is embedded by culture of Malay people and transmitting some important values that need to be understood until today whether it is accepted or no longer remembered.

Linguistics in other hand is a study of human language and sometimes an ancient language and those that are no longer can be read. Linguistics additionally draws on and informs work from such diverse fields as acoustics, anthropology, biology, computer science, human anatomy, informatics, neuroscience, philosophy, psychology, sociology that also a branches of courses that play a very important role in intercultural communication.

These all component merely remarking that all subjects need to have communication skills as the core and intercultural quality to strengthen it’s as language is the component of the intercultural communication itself, the study of linguistics ultimately helps to understand culture that embedded in language and also allow us to communicate freely within this border. Psychology is an academic and applied discipline that involves the scientific study of mental functions and behaviors.

Psychology has the immediate goal of understanding individuals and groups by both establishing general principles and researching specific cases, and by many accounts it ultimately aims to benefit society and a group of people. In this last point the group of people specifically referring to different culture. Usually psychology component merge with social factors to narrow down the understanding and to apply the intercultural knowledge firmly.

These merge area known as psychosocial factors. Psychosocial factor comprises the social being of culture and how the psychological issues affect the exchange cultural idea throughout and ideal interactive communication. Psychologist explore concepts such as perception, cognition, attention, emotion, phenomenology, motivation, brain functioning, behavior and interpersonal relationships. Some of this concept are important and needed to unlock an intercultural communication successfully.

With a perfect asset of component understanding and deep knowledge of all courses within behavioral science people must comprehend the intercultural competence whether appropriately valued norm, and expectations within a culture or effectively by accomplishing goals and then you will achieved cross cultural competence with a immaculate communication skills. As a conclusion, Intercultural communication is a field of study that become important as world expand. Living in the world without border actually tests your surviving skills with this valued asset.

The major perspective that was developed is traditional, interpretive and critical. 20th century shows that technology imperative cause people more frequently come to contact with each other that differ. The mobility around the world has become easier and changing demographic also increases the need of cross cultural understanding. By understanding this asset, a person might gain certain beneficence such as personal empowerment, a freedom from ignorance and also a productive relationship. This three benefits of intercultural apprehension not only bring success individually but also to an industry or the country itself. 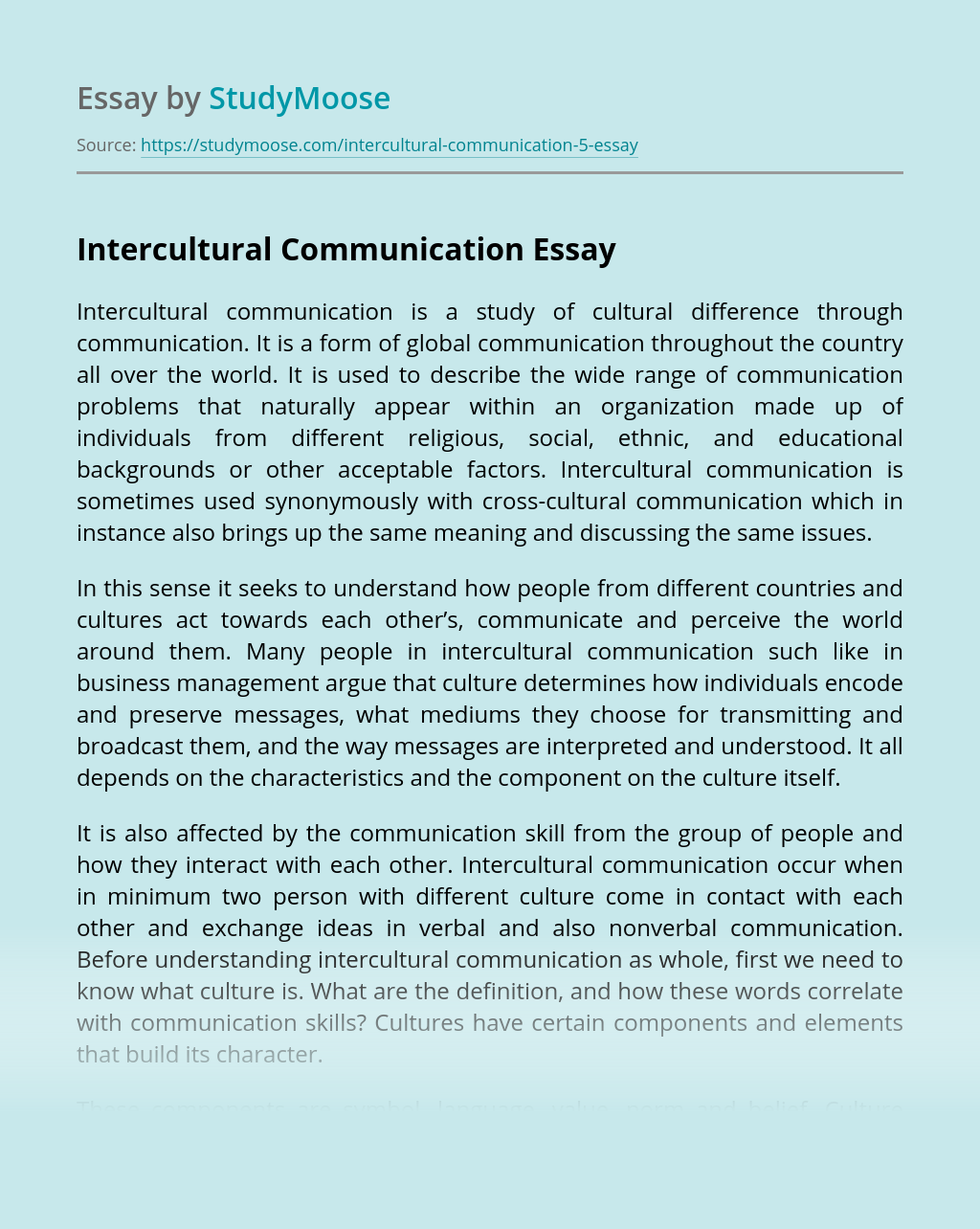