Globalization is the process making the worlds citizens increasingly interdependent economically, politically, and socially, as well as environmentally and technologically. Although, to what extent should we embrace it? By the given definition, you would expect globalization to allow cultures, ideas, and beliefs to spread across the globe, which would lead to the development of our countries. However, this is not the case as said here by William K. Tabb, Economist: “Globalization refers to the process of reducing barriers between countries and encouraging closer economic, political, and social interaction.

Don't use plagiarized sources. Get your custom essay on
“ Globalization Position Paper ”
Get custom paper
NEW! smart matching with writer

Globalization could vastly increase the ability of people everywhere to improve their living standards by sharing knowledge and the fruits of human labor across those barriers. This, of course, does not happen.” Tabb is trying to tell us that while Globalization could be doing us of world of good, it has failed to do so in recent years.

In fact, a process that is supposed to allow us all to grow, is transforming us into somewhat of a monoculture due to acculturation.

Tabb believes that there is vast potential for our world to become closer through political, social, and economic interaction if we allow it to do so. Sometimes we just don’t know exactly how to go about it. The aspect of globalization that has been occurring lately is more like assimilation than accommodation. Some have said that what is happening to the world is “Americanization”, which means that the world is becoming less of a mix of numerous different countries and cultures and more like one giant America.

The beliefs, values, views, history and language of a people should all be evident within their culture, and while we can allow globalization to help counties grow, it should not be in a way that takes away or lessens their culture and it’s importance.

Under the best conditions, globalization reduces barriers allowing the worlds countries to interact closer with one another. Though it should not become an unreciprocated act where only one country is receiving positive ideas and technology without the other. It seems that the world’s more powerful countries easily share their culture but have no interest in receiving anything from the less powerful countries, or when they do, receive much less. This is not due to the less dominant country but rather to the more powerful one being somewhat uninterested. “ Globalization could vastly increase the ability of people everywhere to improve their living standards by sharing knowledge and the fruits of human labor across those barriers.

This, of course, does not happen.” Despite what William K. Tabb said here, these very things have happened, just not as often as one would perhaps wish them to. Take Taiwan for example. Thirty years ago the country had widespread poverty and was extremely poor. Nowadays they are as rich as the Spanish, with poverty rates cut by more than 50% and real wages that are now 10 times higher. How did they manage to accomplish this? This vast amount of economic progress was achieved through land reform, a government push for industrialization (such as the emersion of sweatshops), innovative ideas (more people owning their own business), cultural changes, and democracy rather than dictatorship. As long as foreign countries around the world are able to improve their living standards through globalization, and can do so without becoming too westernized, we can still see globalization as a positive occurrence.

Globalization can do us of world of good. In some ways it has accomplished this and in others it has failed. It has been proven that it has the capability to change the lives of many through an improvement in their living standards. Not to mention that it reduces barriers and allows more interaction between people from different corners of the globe. But while it has managed to do this, a process that is supposed to allow us all to grow, is transforming us into a monoculture at the same time. William K. Tabb’s perspective is not the only one, but should only be embraced to some extent. Globalization should reduce barriers preventing closer relations with other nations and improve living standards. However, it should do so without causing too much westernization in eastern countries, and without assimilating the less dominate nations. 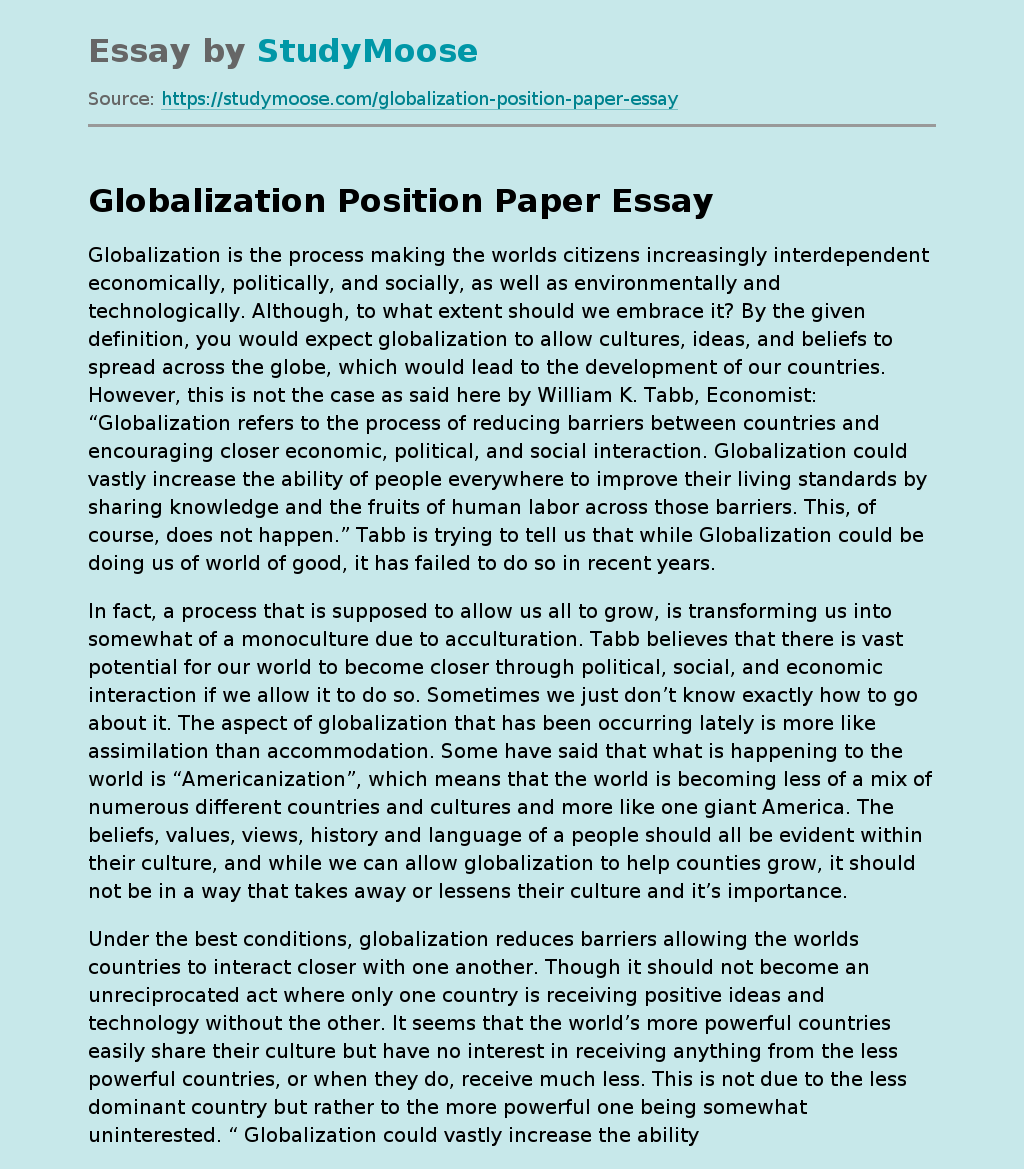