Our culture makes us who we are as it is the predominant influence in our society. One’s culture plays an important role in shaping the principles of an individual’s life. The cultural values of an individual have a deep impact on their attitude towards life. However, some cultures have gender inequality and their beliefs clash with law and superstitions, and so impair our identity. Imagine being female and not being entitled to have a say. Imagine you are not allowed to discipline your child the way you want and you believe in superstitions which are passed down from generation to generation in your culture.

Don't use plagiarized sources. Get your custom essay on
“ Our culture does not make our identity – Clash of culture and the progressive society ”
Get custom paper
NEW! smart matching with writer

Isn’t it essential for people to do what they think is right, without any limitations? We are different and are entitled to live the way we want. In some parts of the world, old customs and prejudices still prevail and women are still considered second-rate citizens. According to an article published by BBC UK, women in Saudi Arabia do not vote in municipal elections, women are banned from driving and face many other restrictions.

The sexes are strictly separated in public and women are required to have compulsory male guardians who show dominance by having the female walk a few paces behind.

However, it is just a matter of time until these women, too, become emancipated. For the moment, they may have to hide behind their apron strings but their society will catch up with the rest of the progressive world. Hopefully then, they can be free from the yoke of ignorance that has been stifling them for centuries.

God knows what great talents have been wasted due to these women not being given any chance to prove themselves. Anti-Smacking laws conflict with the disciplinary acts of some cultures.

The laws make it clear that physical discipline is not a necessary nor acceptable part of parenting as it undermines a child’s feelings of safety, but in many cultures discipline provides a secure environment for both children and adults and ensures positive outcomes as children grow up. According to section 59 of the New Zealand Crimes Act, the use of force for correction is strictly forbidden. New Zealand is among a growing number of countries, around the world, having a legal ban on the use of physical punishment of children. However, this law clashes with some cultural disciplinary procedures.

Superstitious tendencies are acquired early from our culture and those around us, while we are growing up. Superstitions are part of our heritage and remind us of the past which links us with the roots of our culture. The Indian culture has a large number of superstitions and sometimes people are forced to move, to get their daughters released from the clutches of old beliefs. It is rather strange that in India, even educated people believe in such superstitions.

Those most affected are generally the ignorant, the poor and, too often, women. Superstitions signify ignorance, mental weakness and sentimentalism of people. Many people become ‘one eyed’ because their cultural beliefs are passed from generation to generation, making them followers of such concepts. Through this, they lose their individuality, as their decisions are influenced by their culture. We are either raised in a culture of superstition or not.

While some see this cultural exchange as a way to broaden perspectives, others contend that globalization is chiefly permitting a homogenization of culture-and one that is dominated by Western, primarily American, marketing. That is, many hitherto secluded cultures in Africa, Asia, Latin America, and the Middle East are being opened up to American goods and businesses. American food chains such as McDonald’s can be found in nearly all parts of the globe, and American retail franchises are popping up in regions where thirty years ago they would have been unknown.

Advertisements for Nike shoes or Coca-Cola are commonplace in foreign locales, and along with their temptation to buy a product is the invitation to buy into an Americanized lifestyle that values consumption. Many critics of globalization see this push to expand American markets and values as a form of -one that seeks to suppress foreign cultures in order to make more of the globe open to American products and the ideas that would encourage their continued dominance. The perceived loss of indigenous traditions and values is disheartening for those who feel that globalization is a threat to cultural diversity.

In conclusion, culture is pre-eminent in our society as it moulds us into characters deemed to be acceptable and it helps in rendering a sense of individualism to people. However, we do not have to accept some of the beliefs and faiths reinforcing gender inequality and superstitions which impair our identity. Such cultural beliefs should be disregarded and while this transformation holds its dangers, it is a trial every individual must face and one they must win to take their place in society.

Our culture does not make our identity - Clash of culture and the progressive society. (2020, Jun 01). Retrieved from https://studymoose.com/culture-not-make-identity-clash-culture-progressive-society-new-essay 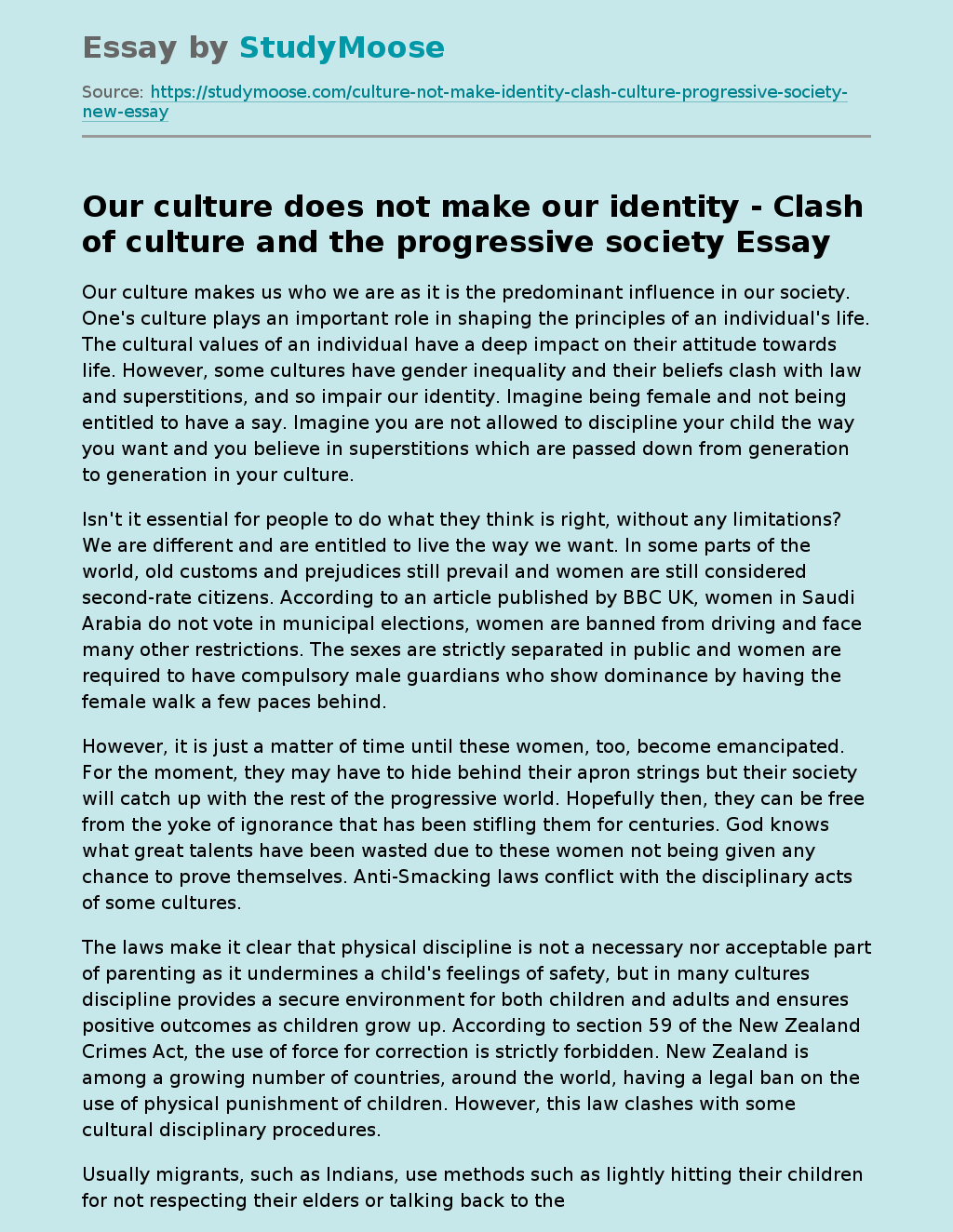