Arrow Electronics Inc. is faced with a difficult, time-constrained choice of incorporating Express in its distribution channel or not. Arrow must consider its market dynamics and the value it adds to its suppliers and customers. Arrow also must determine how Express will affect its business model and selling efforts before making a final decision.

Market Dynamics and Value to Suppliers and Customers

Arrow is involved in a third-party delegated channel system where suppliers (of semiconductor manufacturers such as Intel and Texas Instruments) that partially rely on it to generate demand and fulfill value chain functions without a direct link to customers at all times.

Turn in your highest-quality paper
Get a qualified writer to help you with
“ Arrow Electronics Inc. ”
Get high-quality paper
NEW! AI matching with writer

The value proposition that Arrow provides for its customers is in the form of the distinct value-added services that it provides them, including:

Delivery of components in smaller quantities with little notice Programming support for some devices for individual customers Supplying complete kits for production to contract manufacturers It also provides suppliers with a channel to publicize their standardized parts, and assists in placement for their proprietary devices in the customer’s new products.

For doing so, the suppliers offer Arrow competitive pricing on products. The suppliers all have invested an interest in stabilizing process through the channel, keeping record of who uses the products, and having desire for distributors to perform value-added services. The customers would desire Arrow to provide them parts in small volume on demand as well as assemble kits so that the production lines can run without interruption. The entry of Express presents a clear challenge to Arrows business model.

There is a presented threat as a distributor as the Express internet-based distribution system as the OEM’s may use the web site as a shopping portal for the lowest price that distributors are able to offer. In turn, this would cut down Arrow’s profit as in intermediary and cut the value proposition that Arrow Electronics provides its customers. In addition, adding Express to the channel makes Arrow less attractive to major suppliers causing them to disfranchise Arrow. Signing on with Express may hurt Arrow by possibly making its current sales force lose their personal contact and quality of service which has been established with the customers.

The Advantages of signing on with Express is appealing, especially through gaining new customers in markets that it hasn’t served in the past. The promotional responsibilities would be Express’ which would alleviate added responsibility for Arrow. Also, there may be a potential reduction in inventory and logistical costs and Arrow could gain information on other distributor’s parts. However, if Arrow were to partner with Express, the gross operating margins would decrease from 16.67% to 15.39% in a worst case scenario (Exhibit 1). With expenses currently at 11%, a 23% decrease in Arrow’s operating profits would occur, which Express would have a difficult time making up for. Express’ presence in the mix responds only to demand. They can’t create demand without the ability to gain personal contacts with the customer, and its offer may end fulfilling the role as a means of bargaining for transactional customers for BAS products.

The forecasting trends show value added (VA) sales taking the majority of the sales in upcoming years (Exhibit 2). The sales generated for VA sales receive no benefit from Express, which makes it even less important to Arrow’s future growth. Express’ proposal involves basing reduce costs and expanding revenues for business on the internet. Being relatively new, the internet has not shown to perform either of these functions. It’s very difficult to trade off losing customers based on a judgment whether or not the information provided by the internet could create positive monetary value for Arrow Electronics Inc.

Arrow should propose to Express the possibility of distributing service for the X86 market segment only, and maintain its current distribution system for the rest of its markets. It should create its own internet presence in attempt to develop a strategy of using the internet as a direct channel for its customers and capitalize on its existing strengths and avoid the total risk that Express presents. 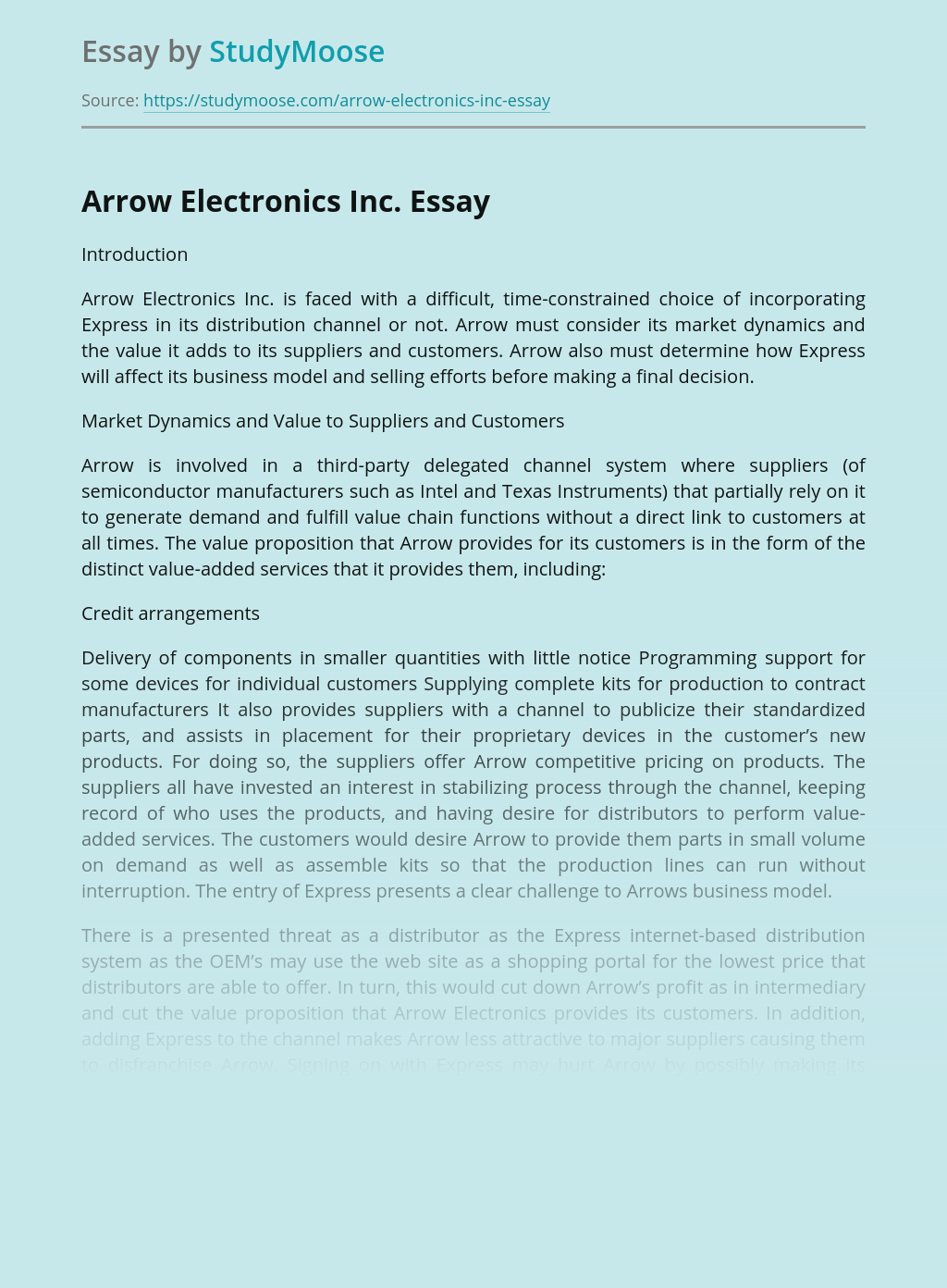 Turn in your highest-quality paper
Get a qualified writer to help you with
“ Arrow Electronics Inc. ”
Get high-quality paper
Helping students since 2015
Stay Safe, Stay Original