Cultural homogeneity and globalization are becoming concepts that are subjects of debate in the world eye. Some scholars and politicians argue for the increase of globalization, and some argue against. The world is becoming smaller and more homogenous and this holds many advantages, some disadvantages, and is creating a future that is full of possibilities. According to the Merriam-Webster Online, globalization is “the development of an increasingly integrated global economy marked especially by free trade, free flow of capital, and the tapping of cheaper foreign labor markets”.

Don't use plagiarized sources.
Get Your Custom Essay on Cultural homogeneity and globalization Just from $13,9/Page

Homogeny is defined by Webster’s Dictionary as, “being of a similar kind or type, uniform throughout” (221). So, in essence globalization is causing the worlds peoples to become more like on another through the dispersion of goods and ideas. Cultural homogeny is becoming more noticeable in today’s society because of the large amount of media and other goods that are part of a larger global marketplace. For example, “Young people everywhere are listening to the same music” (Rourke and Boyer 110).

This does not mean, however, that young people are all listening to “western” music. Many different types of music are becoming part of young people listening preferences and musicians and other artists from all over the world are becoming recognized internationally. Clothing is another area where there is more of a trend towards homogeneity. Rourke and Boyer note, “The leaders of China used to wear “Mao suits”; now they wear Western-style business suits” (110).

As cultural homogeny becomes more of an issue that is receiving media coverage and is becoming more recognized in the world eye, it has been discussed by many scholars as to whether it is advantageous for the world’s peoples. There have been concerns voiced, “For example, languages have been disappearing at rates as worrying as those for species extinction” (Wurm), and the fact that the world is made up of many rich cultures that might be watered down into “a less vibrant monoculture” (Rourke, et.

al 113) if globalization continues at its current pace. However, there are many advantages both cultural and economic to globalization and there is a lot of acceptance and praise for its continuation. Rourke and Boyer state, “Most people welcome the availability of foreign culture. A worldwide survey in 45 countries found that 77% thought that having foreign products available was good, and 61% felt that way about foreign movies and other entertainment media” (113).

Part of the argument against globalization by some is that it is limited to western culture pervading all other cultures and taking them over. However, there are examples that can be shown that cultural homogeneity is a worldwide phenomenon. If we look at “American culture, for example, (it) is influenced by many foreign imports, ranging from fajitas and sushi, through soccer, to acupuncture” (Rourke, et. al 110). American and other western teenagers have more choices through this concept to listen to and view media from other countries.

Also, Rourke and Boyer note that “the interchange of popular consumer goods is another major factor in narrowing of culture gaps” (111) and that this is the case throughout the world, not just of goods going one way out of America and other western countries. Globalization and cultural homogeneity are inextricably linked and are changing the way that the world functions in many ways. Media, goods and ideas are flowing freely from country to country, and this is creating a global society that is a mix of all cultures and economies. ? References Globalization. (2010). In Merriam-Webster Online Dictionary. 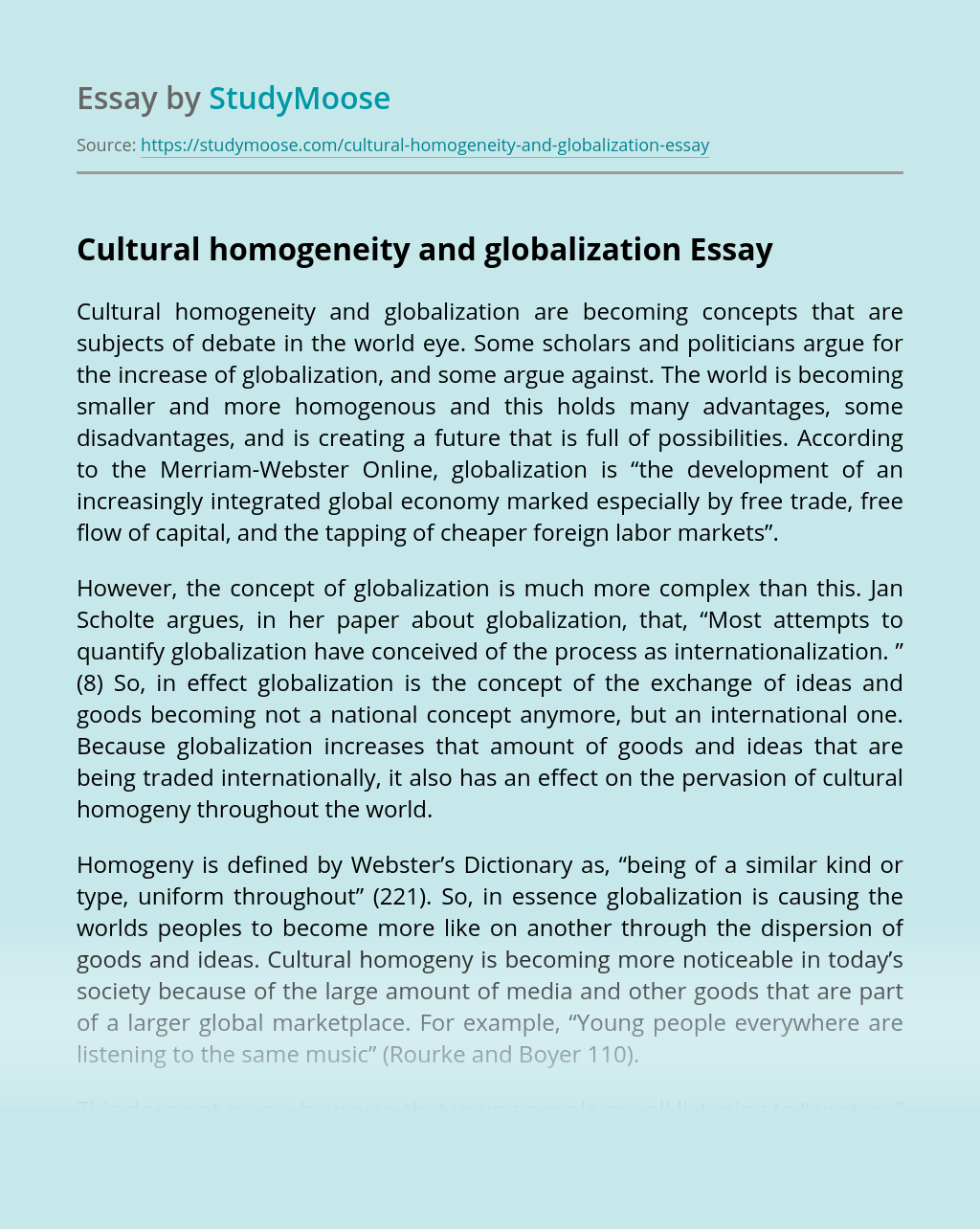 Self Reliance -Ralph Waldo Emerson Voicing his lessons and thoughts on dependence and independence, Emerson wrote this essay to discuss the ability to be self-reliant and self-sustaining. Individuals in a society are forced to conform and fit an ideal image. They are constantly shaped and altered by their environment. However, true knowledge lies in the...

In a study released, 87% of workers worldwide are mentally detached from their work environments and are less likely to be efficient; making work a source of frustration instead of among satisfaction. (Gallup, 1993) The data highlight a lack of dedication to knowing and understanding of one’s own strengths and weak points, amongst the population....

There are certain aspects of sicknesses and illnesses like sexually transmitted diseases and even cancer that aspire expensive medical procedures and attention. Most illnesses don’t even provide a cure, leaving most patients hopeless and creating a new fear for them. Patients can often be restricted with the cost of being cured because it makes them...

Americanah– ISU Part 2 (Plot Summary) Pg. 1 Ifemelu speaks without the fake accent for the first time when taking a train to Aunty Uju’s house. While on the train she meets Blaine, a Black American man, and they spend the trip talking. Blaine gives Ifemelu his phone number, but he never calls her back....

Callum Thomas -( Work in progress as I’m still unsure as to what degree/course I want to go into ) Personal Statement 27th August 2019 Overview I feel like ever since my first Sociology lesson my view on the world has been constantly reshaping and adapting to the new knowledge Sociology grants. Sociology has everlasting...