Imperialism has been a driving force behind progress and advancement in the human race for centuries, however, it has also resulted in the destruction of a collection of weaker nations. European, as well as some Asian and American powers, has applied imperialism to their advantage. The states that they have imposed imperialism on have benefited from this occurrence. This is proven by multiple documents given. However, the indigenous peoples of these nations have faced violence and oppression. This is also proven by multiple documents.

One will clearly see how both arguments are true after examining the following evidence. Often the imperialist nations benefited from their imperial practices, and so did the natives of these lands. An example of how this is true is seen in document two, which is an excerpt from an article by O.P Austin, “Does Colonization Pay?” in The Forum, 1900. Austin explains how the nations that have been imperialized (i.e. Africa, Latin America, and Asia) have benefited from this practice in several ways.

By giving these nations infrastructure, the progressive nations also allow the indigenous peoples to “… establish schools and newspapers for the colonies and give these people the benefit of other blessings of civilization which they have not the means of creating themselves.” This idea is also shown in documents one, five, and seven. Document one is an excerpt from an article by Parker T. Moore in Imperialism and World Politics, 1926. It explains the vast economic benefits the imperialist nations received from imperial practices.

Moore discusses the profits the exporters and merchants, as well as the bankers, and the military leaders have received.

The article also briefly delves into how these economic gains aid the “inferior” nations as well. Along the same lines of the previous article cited, it goes into how the lesser nations received infrastructure such as roads, canals, and water transportation. In document five, a passage from a West African nationalist, Sekou Toure, 1962, it shows the benefits of both the homeland and the industrial lands. It is probing the idea of pro industrialization in Africa and explains how each side is benefiting. Lastly, Document seven exemplifies how indigenous and foreign peoples benefited from imperialism. “Englishmen… have given the people of India the greatest human blessing – peace.” This shows how the British established control over India and changed it for the better. India was introduced to modern infrastructure as well as a strong government. The British brought to India “… an administration that is strong and efficient. They have famed wise laws and have established courts of justice.” The Indians have clearly benefited from Britain and the British also have benefited, most famously in the vast opium trade.

The trade of opium from India to China is a huge part of the economic gains seen by the British, as explained in the report, “Opium and the British Indian Empire: The Royal Commission of 1895” by John F. Richards. He states “British and Indian traders sold Indian opium to coastal Chinese traders. They, in turn smuggled this illegal but valuable product along the numerous rivers to inland markets.” Documents six and nine display quite similar arguments as to the ones previously stated. Document six, a statement by Cecil Rhodes, one of the wealthiest and most successful imperialists of the time, is explaining how he feels imperialism benefits both sides of it. He feels that Britannica should spread its influence worl wide, for they are the most superior race, and that they should fill up as much of the globe as possible. His vantage point on the situation is clearly biased.

He is supporting imperialism, for he himself has also greatly benefited from it, and expresses this through what many today would call, racism. Document nine is a famous poem by Rudyard Kipling, titled “the White Man’s Burden” and also explains ideals eerily similar to that of Mr. Rhodes. He feels that it is the civic duty of the whites to civilize the indigenous population. Based on the preceding evidence, one can clearly see how imperialism benefited both the imperialists, and the natives.

Although imperialism had its upside, there was a severe snag in this policy. The policy of imperialism caused oppression and violence in the nations it was imposed upon. This is shown in multiple documents given. One example of this is seen in document three. This is a political cartoon titled, “Learning civilized ways is hard work”. It shows a white military leader sitting in a carriage being pulled by two workers, one being Asian, and the other an African. This is clearly depicting the exploitation of native labor by the imperialists. This obviously does not benefit the indigenous population. The same idea is displayed in documents eight and twelve being a political cartoon and an excerpt from a report respectively. The political cartoon depicts an African native being put into a piece of machinery, with gold flowing out. There is also a priest standing next to this machine. The African in the machine represents all of the natives being exploited for their labor and the gold pouring out represents the resources that the imperialists reaped from the land. The priest is shown in order to deliver the fact that the powers imposed their religion upon the inhabitants.

The report is of a dialogue by an African tribesman who is pleading with the white men to lessen the oppressive tactics they are practicing. The African justifies this by the fact that “… we are dying fast. We are killed by the work you make us do…”. The oppressors also created carnage in their wake. This is exemplified in documents four, ten, and eleven. The example of carnage spoken of that is perhaps supreme, is in document four. This is a West African verse, and it describes the horrors that African live through. “The white man killed my father… the white man seduced my mother… the white man burnt my brother beneath the noonday sun…” These lones explain how natives were murdered, raped, and forced into slavery. This author’s point of view was obviously one of anger and frustration. This is justifiable given the atrocities that have been committed against him and his family. Documents ten and eleven also display similar types of crimes as shown in the aforementioned example.

Document thirteen is a statement made by an Englishman named J. A. Hobson explaining the reason why imperialism should not be employed. He believes that it is a depraved and self -serving policy that is oppressive and brute like. This author is clearly against imperialism because he feels it is not beneficial to the native population. Hobson’s point of view is clearly swayed, being so most definitely because he either feels sympathy towards the natives, or he himself has been wronged by the powers of imperialism. One type of document that would be advantageous to include in those that were given would be a population chart. This chart would illustrate the population numbers of locals before the wave of imperialism in certain regions, and then during, and then after. This would allow for the reader and the writer to gain an understanding of the true carnage caused by the imperialists with factual numbers and populations.

“Imperialism is a progressive force for both the oppressors and oppressed.” This statement can be efficiently argued on both sides. The evidence given can effectively be used to argue either side. Different peoples have different perspectives on this topic, naturally because they have different point of views. Both faces of this debate are convincing to their side, as both use personal accounts, factual evidence, and first hand examples. 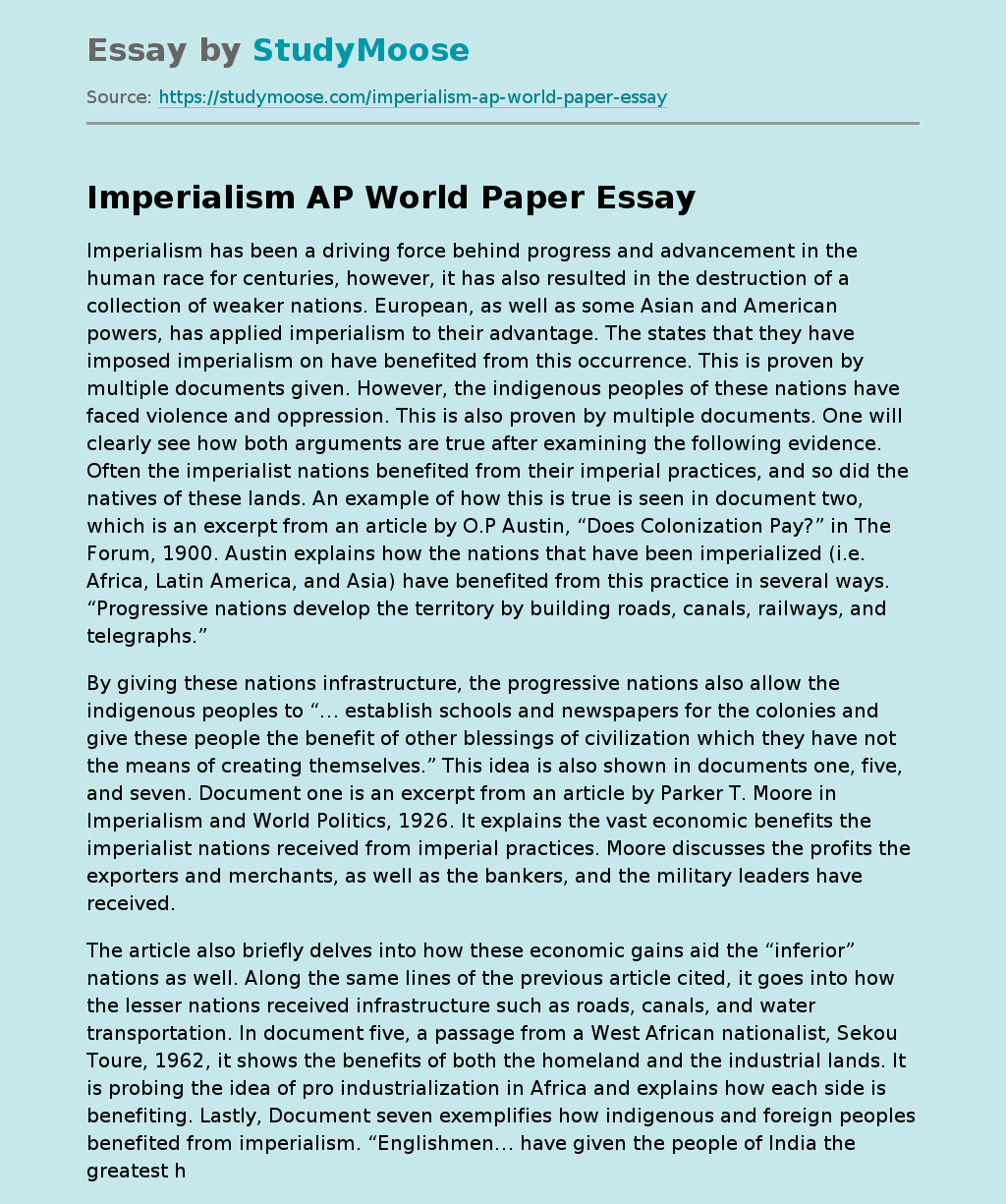