In a passage to Africa George Alagiah conveys his feelings about journalism during the course of his stay in Somalia through the use of various different language and literary devices. In a passage to Africa George Alagiah uses powerful and emotive language to show is views about journalism. An example of this is shown in the quotation: ‘that went beyond pity and revulsion’ , ‘revulsion’ has strong connotations of horror and disease so it marked the reader sympathise with the nature of the terrible scene that Alagiah is encountering in the village which he is observing.

Turn in your highest-quality paper
Get a qualified writer to help you with
“ George Alagiah’s Passage To Africa ”
Get high-quality paper
NEW! AI matching with writers

Another quotation that shows this is: ‘normally inured to stories of suffering, accustomed to the evidence of deprivation’, this quotation shows the way that Alagiah is hardened by the experiences that he has faced through the word ‘inured’ meaning immune to in conjunction with the words ‘suffering’ and ‘deprivation’, both of which have extensive connotations of evil and terrible hardship on those that it refers to, overall showing that Alagiah was steadfast to the other horrors that were unfolding around him and that the event he had just witnessed ahs managed to break his immunity of disconnection between him and the subject of his journalism.

These quotations all show that Alagiah used emotive and powerfully connotated words to show the disconnection and connections with the journalist and subject. In the text Alagiah also uses a variety of sentence structures to show his views an observational journalist. An example of this is: ‘I saw that face for only a few seconds, a fleeting meeting of eyes’, the use of the above sentence structure shows that this very brief moment had deeply impacted Alagiah’s views on the way that he considered his role as a passive observer.

Another example of this is the quote: ‘normally inured to stories of suffering, accustomed to the evidence of deprivation’, the way that the sentence is structured shows that Alagiah is meaning to portray a list to show how he feels about the way that a journalist can be susceptible to becoming accustomed to the terrible scenes that are unfolding before there eyes. 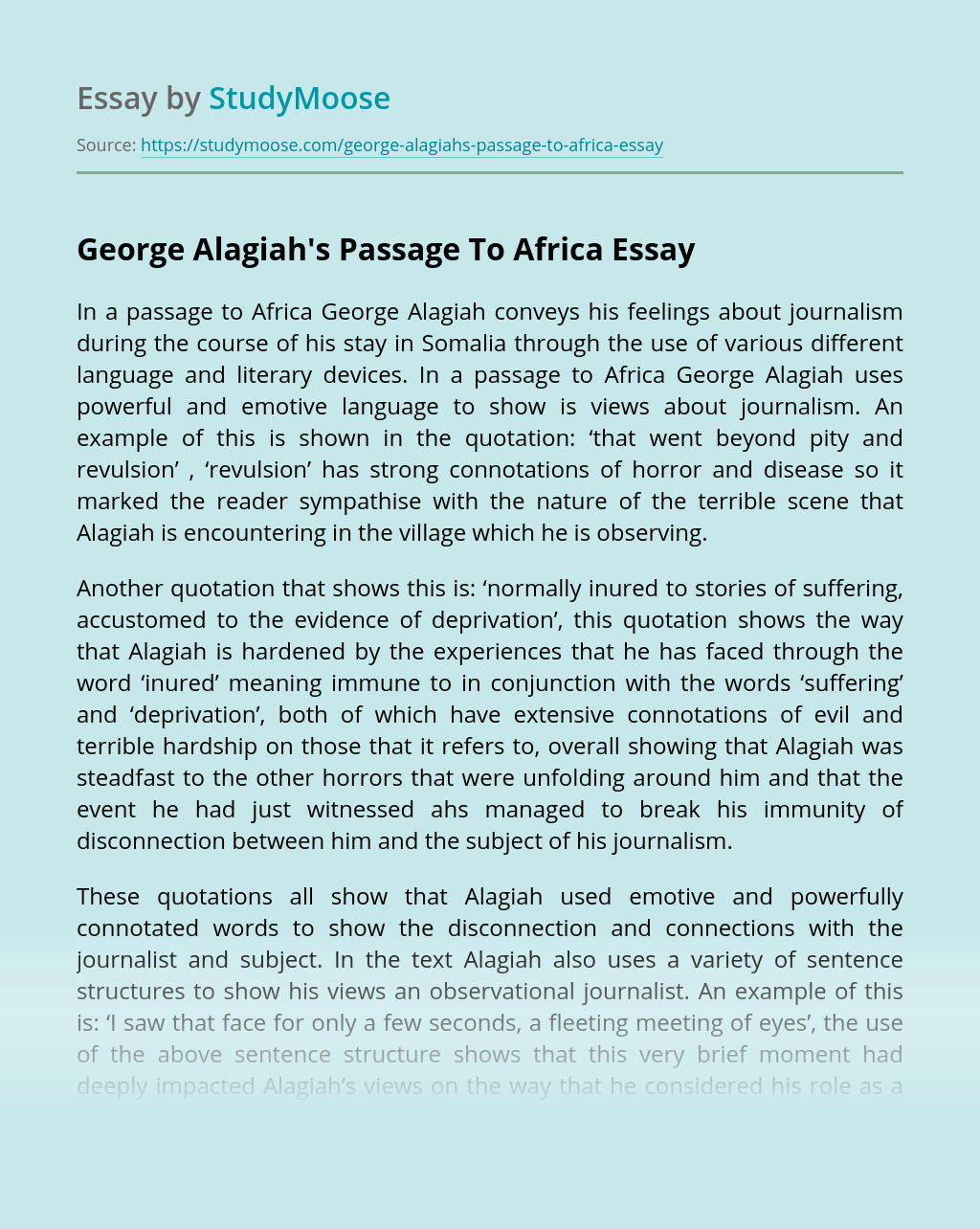 Turn in your highest-quality paper
Get a qualified writer to help you with
“ George Alagiah’s Passage To Africa ”
Get high-quality paper
Helping students since 2015
Stay Safe, Stay Original