Every person begins their life with a birth and ends it with death. In our lives, there will be other rites of passage that will still have great importance; celebrating birthdays, graduation from school or collage, getting jobs, marriage, having kids, transition from child to adult and even divorce. Rites of passage help many people feel part of their respective society. Making their lives sweeter or bitter. Easier or harder. Better or more difficult. Their changes are huge, but not only for the person itself, but for their new roll on a society as well.

Don't use plagiarized sources. Get your custom essay on
“ Rite of Passage ”
Get custom paper
NEW! smart matching with writer

Since forever, people want to be accepted. They even feel the need to be accepted in their society and it has always been the same but in so many different kinds of societies.

A rite of passage is a ceremony and this ceremony marks the transition from one phase of life to another. Although it is often used to describe the tumultuous transition from adolescence to adulthood, it does refer to any of life’s transitions (Births and Beginnings, Initiations, Partnering, and Endings or Death).

Rites of passage aren’t always just to be in a social society they also are to become part of the cultural or even their religious society. Some of the cultural rites of passage fall into three main phases: separation, transition, and incorporation, this ones are the toughest ones. A rite of passage can even be dangerous, disgusting or sometimes fun and hygienic. A rite of passage can be a one day long, like a bachelor, a marriage, confirmations, bar mitzvahs and other, or they can take a month, like in the Sambia tribe, a guy for becoming a man has to do a 3 stage passage of a month long.

I personally believe that being part of a society is important to a daily life everywhere. Even on tribes or cities or smaller groups. Rites of passage takes place on getting accepted in society by showing or proving or doing something or sometimes the rites are for them to learn their new roll on society and all that marks a person lives changing it whole self and turning it into something that belongs somewhere, in a certain society. Even though rites of passage aren’t always the best ideas, people think they are necessary.

People who make social rites of passage do it for a better acceptance or to be appreciated in a different way so that in a future they can be respected. Sometimes a rite isn’t for you to be a part of a society, sometimes its for you to feel like you are part of one such as a first communion or getting a job, and sometimes is for you to make your own community. Such as when you graduation, celebrating your birthday, getting married and creating your own family is a rite of passage. Cultural people do rites to honour their families and to take place in their culture, in some of these culture it is necessary to do some rites to be on them, in most cases is the rite of passage that prepares you to marriage and the rite of becoming and adult. But when it comes to religion, some rites are very important because it doesn’t only mean that you are accepted in their religious community but that you truly believe in that religion. Such as the confirmation or a bar mitzvahs. There are also smaller but important rites that belong to small things such as work. For example, there’s a rite called “the white coat ceremony” for doctors; that is when you finish your studies and have your first official coat.

Some rites of passage aren’t exactly as easy or as sweeter as other. Some are even dangerous and really nasty. There are rites that can hurt and be difficult to do. But in the end they are worth it. On the Sambia tribe, doing homosexual acts and digesting another man’s semen is as important to the Sambia culture as a simple confirmation to a Christian community. On other tribes doing a jumping from a huge mountain being hold only by a rope on your feet, doing circumcision to woman and man, let themselves get hurt and bleed and other terrible stuffs are huge deals for their societies that sometimes is not an option. You either do it or you’re out. And that isn’t the only thing that matters to some but to honour their families or friends.

I once heard of the rite of passage of a culture that woman had to be circumcised and I just thought that it was unnecessary and ridiculous for it to be the transection for a girl to a woman. But at the end, this culture has its own believes and the fact that for them its important I think its always worth it. Some people think that some rites are dangerous and violent and should be stopped because it involves things like murder. What I’m saying is that they are not right and is not ok, but its their way of proving themselves and the others something, that they are as worth it as each of its partners. These rites are violent in a way that they end up teaching them something that any other experience as that one can.

So, as I’ve said before. Doesn’t matter how hard, silly, big, small, easy can a rite of passage be. It would always be important. It is always going to be worth it, remarkable in your life. It would always in some way make you feel part of a community. It makes you realize and connect with other people that have been through the same that you have. A rite of passage also helps you to be prepared for your new role, or new beliefs, or new work or new people or new responsibilities. And by all of this you can say that a rite of passage is a way of making yourself and other feel like you are a new different changed person. 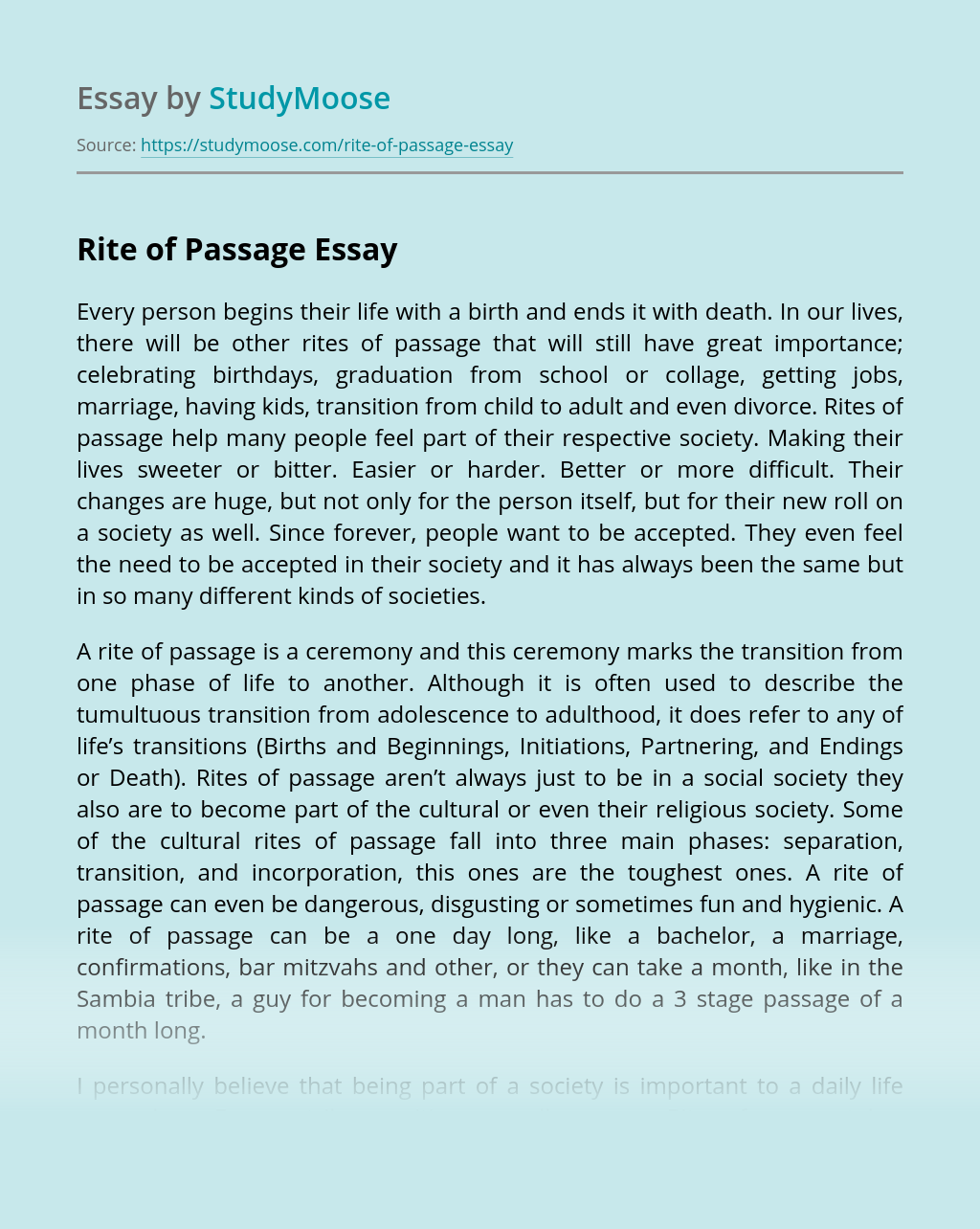