Since the middle of the 20th century, psychologists, physiologists and medical professionals have been increasingly interested in the ways hormones impacted human behaviors. The dramatic progress which scientists had been able to make was due to extensive knowledge of pharmacology and chemistry, which could be used to study neural events that came as a result of hormonal activity in humans. Hormonal influences on humans were harder to document than those on other species, due to the fact that researchers could not perform laboratory studies with the use of placebo (Hines, Brooks & Conrad, 2004).

Don't use plagiarized sources. Get your custom essay on
“ Gender Identity Paper ”
Get custom paper
NEW! smart matching with writer

Thus, the current information with regard to human sexuality and gender identity was mostly obtained from other studies, including the studies of abnormal hormonal activity in patients with genetic disorders. Pfaff, Philips and Rubin (2004) write, that “hormone / behavior relations always serve either homeostasis or reproduction”. A whole set of hormones works to maintain weight, temperature, and fluid balance in human organism. Hormones impact human responses to stress and pain, but hormonal influences are not limited to common behavioral reactions.

Hormones are directly and indirectly linked to gender identification, and although relationships between human sexuality and hormones leave much room for further research, professionals are confident that hormones are the critical factors of gender identification in humans. From the viewpoint of physiology, mammals are usually divided into the two large (male and female) gender categories. The formation of one’s gender begins at chromosomal level. For the majority of mammals, the homogametic sex is female, and if not influenced by male hormones, a phenotypic female with XX chromosomal pattern develops.

In the presence of the Y chromosome however, a locally acting protein transforms gonads into testes, which produce numerous peptide hormones, androgens, and determine masculine gender differentiation (Gallagher, Nelson & Weiner, 2003). Testosterone predetermines the development of external genitalia in boys; androgenic receptors and 5-alpha-reductase which are present in all females, may also lead to masculinization of female genitalia. Apart from impacting gender identity, hormones are directly responsible for a whole set of behavioral responses. Hormones work in ways that facilitate processing of sensory information in humans.

“Females have generally greater sensitivity for chemosensory stimuli. […] This sensitivity is further enhanced by increased periovulatory estrogen concentrations” (Gallagher, Nelson & Weiner, 2003). Given that hormonal impulses in men are different from those in women, men lack this kind of responsiveness, which is also suggestive of the positive relationship between hormones and human behavior. Extensive research of genetic disorders and sexual differentiation suggests that the formation of one’s sexual identity is also influenced by factors other than hormones.

Social environment and psychological traditions may produce irreversible impacts on one’s gender identification. These influences are particularly visible in humans with physiological pathologies and genetic disorders, which lead to phallic inadequacy or absence. In the study by Reiner and Gearhart (2004), out of sixteen subjects with diagnosed genetic disorders fourteen had been raised as females. Later, under the impact of physiological changes only eight of them changed their roles to males, with the rest spending their lives as females.

These findings prove that identity is influenced by the whole complex of hormonal and environmental factors; and researchers are still unable to determine, which of these factors produces the critical impact on gender differentiation in humans. The truth is that neither behavioral, nor psychological or hormonal factors can be held responsible for sexual differentiation in humans. In reality, “human differentiation is the result of a series of genetic and hormonal events that influence the development of the internal and external genitalia” (Sytsma, 2006).

Whether gender identity is impacted by hormonal or environmental factors is not always clear, but it is clear that there is a whole continuum of gender experiences between female and male genders; and how humans identify themselves in this gender continuum will depend on the whole set of genetic and hormonal influences, as well as the external environment in which humans are raised. Conclusion For years and decades researchers believed that hormones were the critical factors determining gender identity in humans.

With the extensive knowledge of genetic and sexual disorders, researchers have gradually come to realize the role, which environmental and psychological factors played in one’s sex differentiation. Neither hormones nor biological or psychological factors can be held responsible for the development of gender identity in humans; rather, a whole complex of genetic and hormonal influences will determine the paths of gender formation and differentiation in all human subjects. References Gallagher, M. , Nelson, R. J. & Weiner, I. B. (2003). Biological psychology. John Wiley and Sons. Hines, M. , Brook, C. 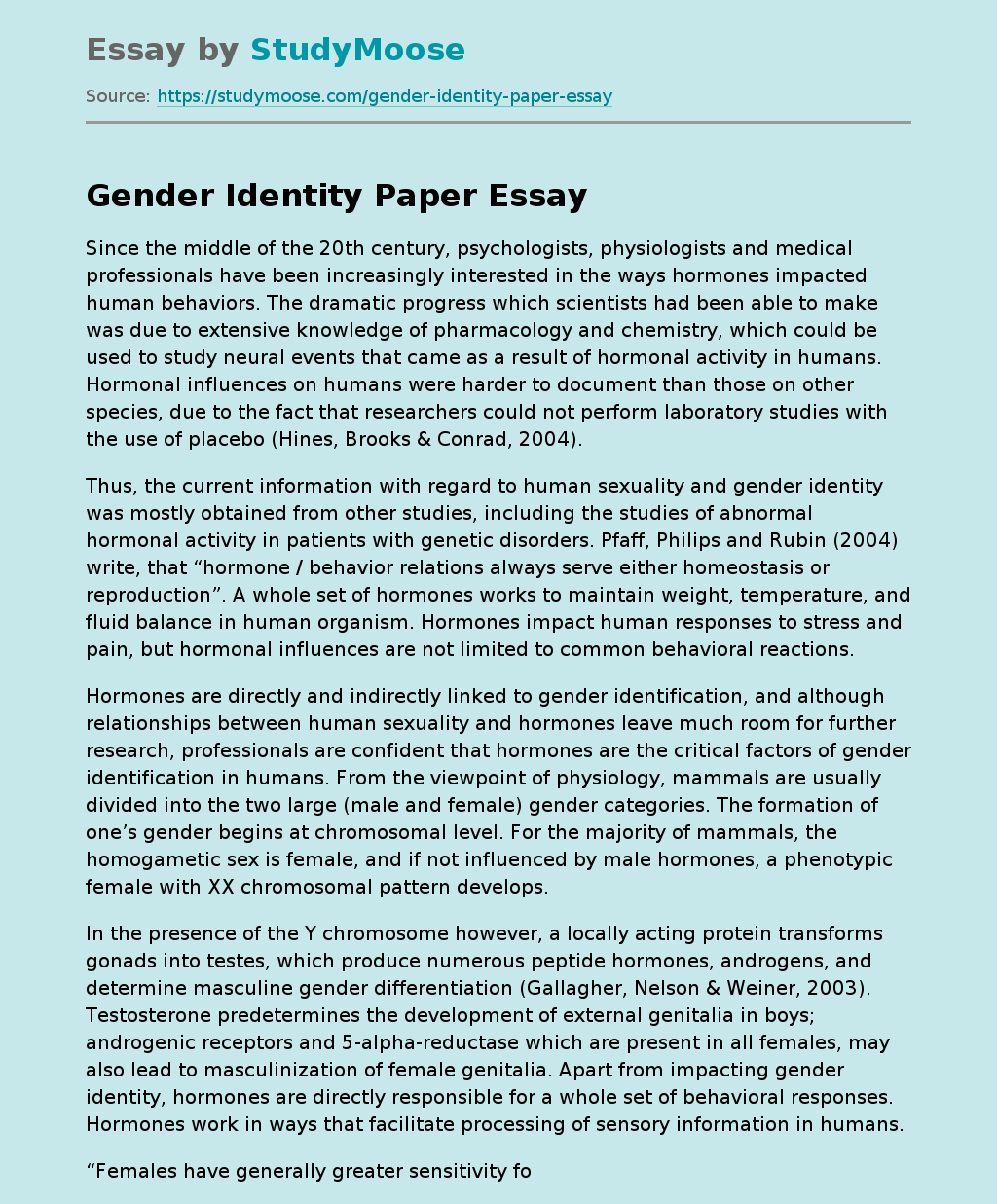