Forms Teach Us Nothing About The Physical World

To what extent is it true to say that the forms teach us nothing about the physical world? (15 marks)

There is an ongoing debate as to whether Plato’s Theory of Forms truly teaches us anything about the physical or empirical world, with many scientists and philosophers throughout history having very contrasting views. Throughout this essay I will lay down both arguments for and against the above statement and evaluate the outcome.

Aristotle, although the student of Plato, had a very different outlook on the theory of physical and universal forms.

Don't use plagiarized sources.
Get Your Custom Essay on Forms Teach Us Nothing About The Physical World Just from $13,9/Page

Aristotle also undertook a more empirical analysis, emphasising that observation comes first and abstract reasoning second. Plato would argue that instances of for example beauty only exist because they partake in the universal Form of Beauty. However, Aristotle would argue that universal concepts of beauty procure from instances of beauty if this world, the physical world. He believed that we only arrive at the conclusion of beauty by observing particular instances of it, for example a sunset, or a beautiful woman. Deriving from this theory he deduced that beauty has no existence beyond the concept we build from these instances, from the sunset or the woman, and that without these exemplars beauty has no existence. This accentuates the concept of particulars coming before universals and forms, with particular insistence on observation. Due to this, Aristotle has long been considered one of the first to develop the idea of scientific method.

This idea of scientific method and observation links to that of Dawkins. He believed that any talk of a transcendent world is meaningless as there is simply no evidence to suggest such a declaration. For Dawkins, real knowledge presents itself through scientific examination of the physical world around us. However, the discovery of a quantum world and its physics has placed this empirical outlook under scrutiny. The quantum world is that of astoundingly small forms of matter, much smaller than atom, and questions our understanding of the physical world.

This is presented in evidence of laws that govern the world of atoms upwards (in size), not always applying to the quantum world. Although the quantum world could still be considered that of the physical realm (we know of its existence), its discovery implies that what we see may not be a truly accurate depiction of the world. If we cannot uncover an acute demonstration of the world then we also have no argument to suggest that the World of Forms does not exist.

Kant, a rationalist, would in some sense also agree with this. He believed in the actuality of two different realities –that of sense experience (phenomenal) and that of the observed world (noumenal). Kant conceived that our idea of the world comes from the way we apprehend and elucidate the universe around us, that we experience through our five senses (touch, taste, sound, sight and smell). In contrast to this, he also contrived that the very fact we observe through these sense means we change the nature of our perception. In some comprehension this could be said to be agreeing with Plato’s separation of realities, but also illuminates empiricism’s lack of ability to provide accurate information about the world around us as we can never ‘sense’ the world as it verily is.

Forms Teach Us Nothing About The Physical World. (2016, Sep 11). Retrieved from https://studymoose.com/forms-teach-us-nothing-about-the-physical-world-essay 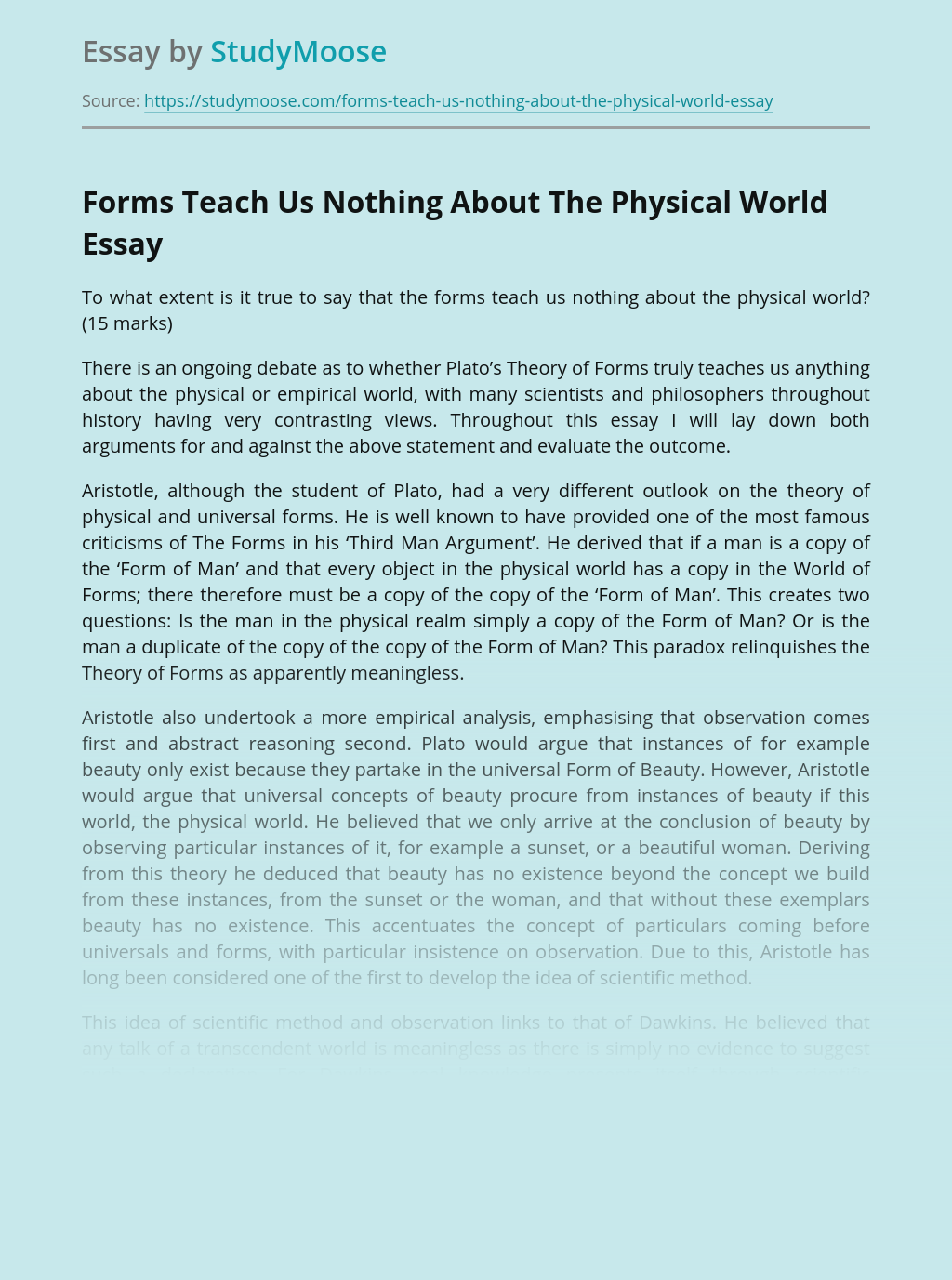 Though considered one of the founders of theology, specifically in terms of Christianity, it is also widely accepted that St. Augustine played a large role in philosophy as well. In being familiar with total skepticism, the idea that nothing can be known, Augustine advised that this thought could be disproven in at least three distinct...

The Oxford English Dictionary defines philosophy as “Knowledge, learning, scholarship; a body of knowledge; spec. advanced knowledge or learning.” By this definition we can gather that philosophy is, essentially, the pursuit of knowledge or understanding on a much higher level than usual. In the following paper I will present my views on philosophy as a...

Know Thyself and Goals in Life

When early Greek philosophers developed theories in the premodern period, they challenged many dominant assumptions of this period. Socrates and Plato were two of the most influential early philosophers who addressed the issue of the good life. For these two philosophers, the good life was an ethical life. Socrates was famous for his statement “Know...

Management Is An Art Or Science

The concept of management is universal and very old. That is why different views have been expressed about its nature by different writers from time to time. According to my personal opinion management has element of both art and science. Management as an Art Art refers to the way of doing specific things; it indicates...