Enhanced Financial Disclosure. This requires the top management to ensure and confirm that their firm’s financial reports are absolute and precise. That is making CEO’s and CFO’s accountable.

Whistle-blower protection. This act provides protection to those people who disclose cases of fraud that has occurred in a company. (Fraedrich, 2008) Fifth, corporate and criminal fraud accountability. This act helps auditors in an organization to detect fraud and those responsible should account for any misuse of the company’s resources.

Don't use plagiarized sources. Get your custom essay on
“ Financial Disclosure ”
Get custom paper
NEW! smart matching with writer

As for those who cannot account then they are taken to a court of law to answer for those charges.

Cost of Compliance. This act deals with the cost one has to encounter in lack of compliance to this act, the company ethics and policies. The cost could even be suspension from duties for sometime. Laws that encourage ethical conduct are: Sarbanes-Oxley Act, civil law and criminal law. The difference between civil law and criminal law is their enforcement. (Fraedrich, 2008)

Some of the federal sentencing guidelines for organizations include: First, Establishing an autonomous body to investigate complaints forwarded by the employees.

Second, periodically allowing supervisory inspectors to ensure objectives in an organization are met. Third, revising its post-employment guidance of an employee in the organization. Third, implementing a process of second review of self disclosures before they are accepted or closed. (Scovel, 2008).

Leaders are essential in influencing an organization’s corporate culture and ethical posture. The government’s intervention is through establishment of laws and regulatory issues which sets the minimum standards for acceptable behaviour. The importance of laws is because society does not act in its best interest hence they require rules and regulations to govern them. (Ferrell 2008)

The government had a set of standards through regulation to influence the ethical behaviour of South-West airlines (SWA) and Federal Aviation Administration (FAA). Since ethical issue intensity is the perceived relevance of ethical issue to an individual, work group and organization. Positive or negative incentives can affect the perceived importance of an ethical issue. FAA requires that air carriers need a system to help them perform repetitive inspections of aircrafts fuselages in a timely manner.

However, it was found that SWA did not have an adequate system to ensure it completed its inspections and thus operated 46 aircraft that were not inspected. (Scovel, 2008) In the ethical decision making process: First, is to recognize that an ethical issue requires a choice among several actions that various stakeholders inside or outside the firm will ultimately evaluate as right or wrong. The government has to make a decision process that should be used to determine whether actions are ethical or unethical.

This consists of corporate codes of ethics, top management actions, ethical policies, co-worker influence, and the opportunity for unethical behaviour. The work group constitutes of people such as peers, managers, and subordinate, who have more influence on daily decisions in an organization. (Scovel, 2008) The oversight function for the congress and relevant regulatory agencies affiliated with FAA is that, FAA failed to carry out its duties and responsibilities in the manner that minimized its importance. FAA relationship with its stakeholders, including the airline industry, was extremely adversarial.

South- west airline warned their employees about cooperating with FAA for fear of enforcement action against an individual or the airline. In that connection, when an airline discovered that inadvertent mistakes had been made, they attempted to resolve problems internally, without alerting the FAA. The value of this approach was limited. Hence, a specific problem was resolved at a specific facility. Federal aviation administration relies too heavily on self disclosure and promotes a pattern of excessive leniency at the expense of effective oversight and appropriate enforcement. (Oberstar 2008)

The following are responsible for ensuring public safety in the air: Federal Aviation Administration, who should order the development of a safety issues reporting system that can provide employees with an opportunity to report safety concerns, Voluntary Disclosure Reporting Program (VDRP) which is intended to identify and correct adverse safety events that would otherwise not be in FAA’s attention, Aviation Safety Action Program (ASAP) which is another voluntary reporting program that is designed to identify and correct adverse safety events reported by an employee of a regulated entity and SWA who are responsible for ensuring that, they have an adequate system to ensure it completes its inspections so as to have inspected aircrafts operating. (Scovel, 2008) 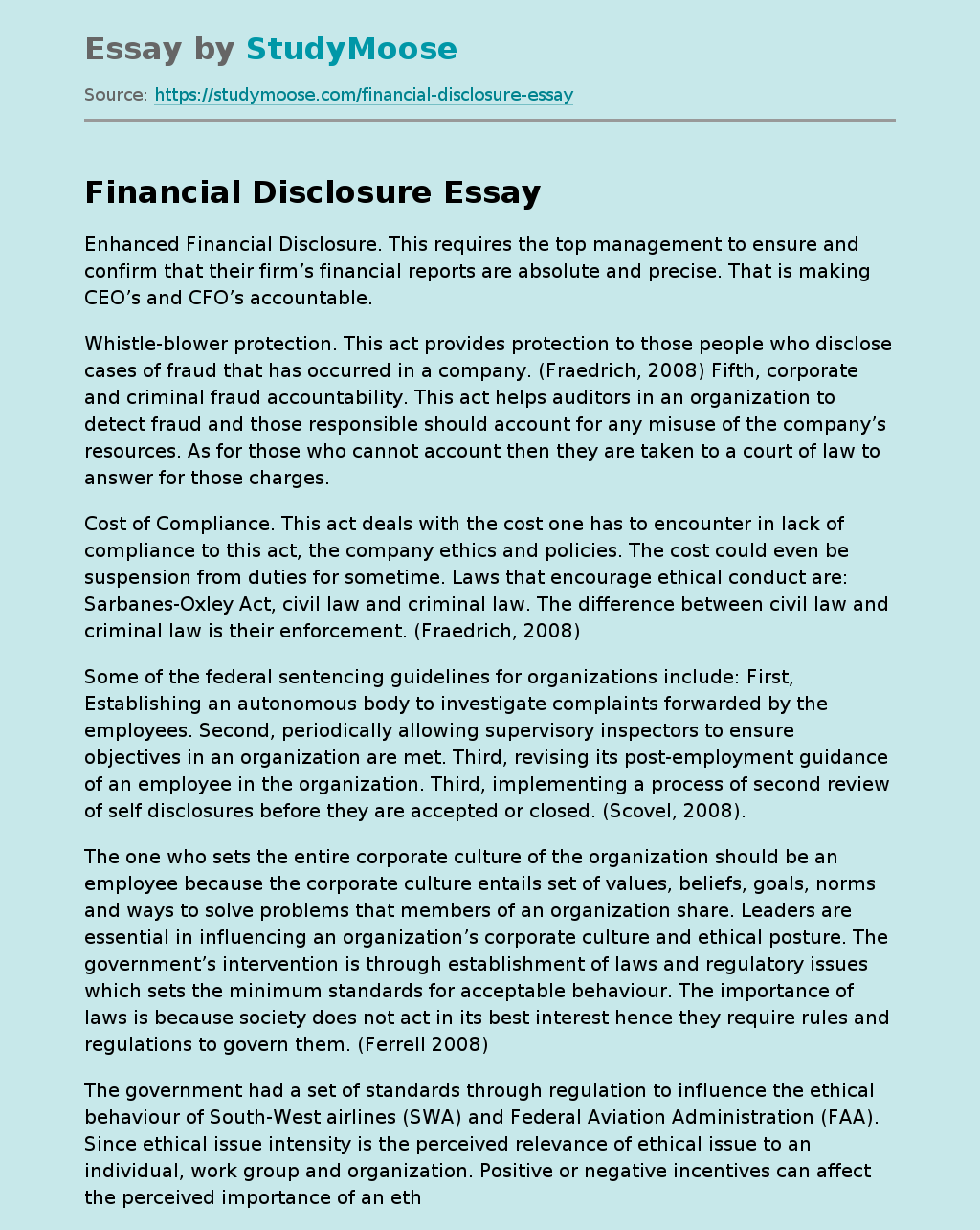