Responding to the Ethical Challenges faced by Nike

Don't use plagiarized sources. Get your custom essay on
“ Responding to the Ethical Challenges faced by Nike ”
Get custom paper
NEW! smart matching with writer

The Korean suppliers, who represented Nike, were accused by labor activist and NGO’s of being abusive to workers. This by itself was against “The Nike Code of Conduct.”

The Nike Corporation also faced issued with NGO’s and labor activists about paying workers low wages in Indonesia. Their Korean suppliers didn’t not pay workers the minimum wage and tried to cheat the Indonesian government by pleading economic hardship, so that they wouldn’t have to pay the workers a mere $ 1.

00 US equivalent pay. When accused of what was occurring, a general manager didn’t think that it was the company’s function to monitor labor violations. However in a major turnaround and I am sure after that manager being reprimanded for that statement and disregard for the company’s ethics, they instructed the Indonesian suppliers to increase the workers pay.

They faced problems with Child Labor in Pakistan. In June of 1996, Life Magazine put Nike in the midst of misery, which caused an array of accusations about child labor.

They published a photo of a 12 year old boy, stitching a soccer ball. Sialkot a city in Pakistan produces soccer balls for Nike and their competitors. However, due to the uproar by NGO’s, trade unions and consumer groups they prompted to impose sanctions against the purchasing of this product by the company. The company in turn, took a big hit and learned a lesson in globalization, human rights, international labor laws and their corporate responsibility.

Their operations in Vietnam posed some environmental, health and safety issues. One of their Korean contractors (again) operating in Vietnam was faced in a dilemma where and NGO help spur an audit by Ernst and Young which found high levels of Toulene, which is very hazardous chemical that causes damage to the CNS, liver, kidney and causes eye and skin irritations. The chemical was released in the plant which posed a threat to the health of workers. Employees were not given proper PPE. This was in direct violation of OSHA standards and also again, “The Nike Code of Conduct.”

Nike’s negative outlook to their stakeholders about their suppliers posed a serious threat to the organization. Even though their suppliers were the
ones that were involved in these ethical issues, it still reflected on the company. Consumers are concerned only with a brand and not a supplier behind the brand. Also, Nike was responsible for their suppliers’ actions due to them not monitoring their working standards, payroll, human rights etc. Due to all the negative media, NGO and consumer attention, it caused Nike to loose some contracts with various universities supply them with uniforms, equipment and footwear etc.

In response to my friend’s questions about the validity of the claims that are against Nike, I would first have to tell him that I value the integrity of my employer. But since this question asks me what I would say privately, and we are close friends, I would be somewhat try honest to him, and tell him how I felt, only because the information that was stated in these claims were made public due to avid media coverage and the audit conducted by Ernst and Young.

Being that the claims are valid I would tell him about my feelings based only on the information available to the public. I would initially ask him to tell me how much he knows and then based on that make an analysis of the situation, and think about ethically what I am privy to say or talk about, being that I am still employed with the organization and the terms of which we uphold or code of conduct.

I would address each argument specifically based on the allegations that we are faced with to the best of my knowledge and maintain a clear and concise goal of keeping in mind my reliability to my employer. Being that we are being blamed for infractions carried out by a supplier I would let my friend know that, we were not aware of the situation at hand at the moment but we are looking into it because we support Human Rights, Child Labor laws, Unionization and fair wage system. Our corporate code of conduct, “The Nike Code of Conduct” is available to anyone who wishes to know about it, so I would tell my friend that this is what our company stands by and since my employment with the company I have known that they are in effect and enforced. Being that we were not able to physically be present in Indonesia, Pakistan and the other countries of which this accused supplier has committed these Human Rights violations on employees, and stress again that we were unaware of the situation, how can we be blamed. I will also be sure to reinforce to him the fact that he should know that when the media gets a hint of information that could lead to the allegations of a multi-billion dollar organization how they could make an “ant look like an elephant.”

Also, upon learning of such violations and treatment of these workers, my organization stepped in and not only reprimanded this supplier for trying to cheat the government of Indonesia out of paying minimum wage, but also to the workers. Based on our coalition with NGO’s and our commitment to corporate responsibility I would be sure to inform him that we have created teams such as an action team to monitor environmental, health and safety issues. We also developed teams to monitor the labor rules and working conditions of the workers of our suppliers in these third world countries. Hence, if we fell short on our monitoring tactics, our involvement with labor activists, NGO’s and the UN will make sure that we manage our mistakes that were made due to these allegations.

Being that this is my close friend, I have to keep in mind that I am an employee first to this company and while I am employed there. If I say the wrong thing, or he perceives it in the wrong way I could stand to loose my job or possibly be deemed a whistleblower to the organization. Regardless of the fact, Nike was blamed indirectly for these violations but they still took the responsibility to try and correct their mistakes that the organization should have been aware of. I am sure that if my friend is a “good friend” they would or should understand that I cannot violate my principles. Other than that based on the support of the allegations made to the company I am sure he would be more educated now that I gave him my insight on the claims.

The triple bottom strategy that I would suggest that Nike employ would be being more conscientious to environmental, health and safety issues, ethical issues with regards to their stakeholders and share holders (internal and external) and Human Rights. Although their corporate code of conduct addresses this, they need to reinforce their standards to avoid the type of situations that was discussed in this case study.

In reference to IKEA approach to their ethical practice, had Nike been more observant about the issues with the supplier after the first incident occurred the others could have probably been avoided. When IKEA learned of what was occurring with the supplier towards the working conditions, environmental issues and the Human Rights Violations regarding Child labor, they stepped in to rectify the situation immediately. Nike only did so after labor activists, NGO’s and trade unions etc got involved. From my analysis of things, they should have been more proactive rather than reactive.

Starbucks approach to things was somewhat similar to IKEA, but Starbucks stressed their commitment to social responsibility by way of thinking about their stakeholders. Nike on the other hand, seemed to be more dedicated to their shareholders the production of merchandise. They did accomplish being a multi-billion dollar company in a short space of time, but at what expense? It came with huge repercussions of Human Rights violations in the form of child labor and underpaid workers. They didn’t address these issues in the right manner, something that Starbucks did and overcame the allegations against them.

Nike needs to delegate these issues in their organization accordingly to enforce labor laws and environmental laws to their suppliers. In this case study, the supplier was based in Korea, but had operations in Indonesia, Pakistan and other third world countries. They went into these countries, tried to manipulate the government by way of cheating them into allowing workers to get below minimum wage. Also, standards in the workplace were not enforced in the proper manner. The organization needs to supply workers with the proper Personal Protective Equipment (PPE), which is mandated by Occupational Health and Safety Administration (OSHA).

The company also needs to maintain a proper relationship with the different NGO’s, labor commissions, trade unions and consumer activists in these countries. This can aid them in the monitoring processes of these suppliers to ensure that issues are being handled in the right way. It can also help save costs that the company pays to monitors, for example contractors. Nike can implement the money they save into a program that handles the ethical issues of workers, because I am sure they don’t have a human resources department and an ethics commission to contact with their matters of concern. I am sure that this could increase their productivity employee.

Hopefully the company learns from their past mistakes that they should not only be concerned with their shareholders but about the stakeholders as well. I believe that external and internal customers make up a business or organization and each has a vital role to play in it success or downfall. In this case, lack of attention to the working conditions and wages of the workers (shareholders could probably led to the ultimate downfall of the company. Nike has many competitors that can slowly overtake them in the consumer market. Human rights play a major role in consumer decisions in the 21st century. Evidence of this was found in the study whereby when the consumer activists learned about what was going on they boycotted purchasing the soccer balls due to child labor.

Responding to the Ethical Challenges faced by Nike. (2016, May 08). Retrieved from https://studymoose.com/responding-to-the-ethical-challenges-faced-by-nike-essay 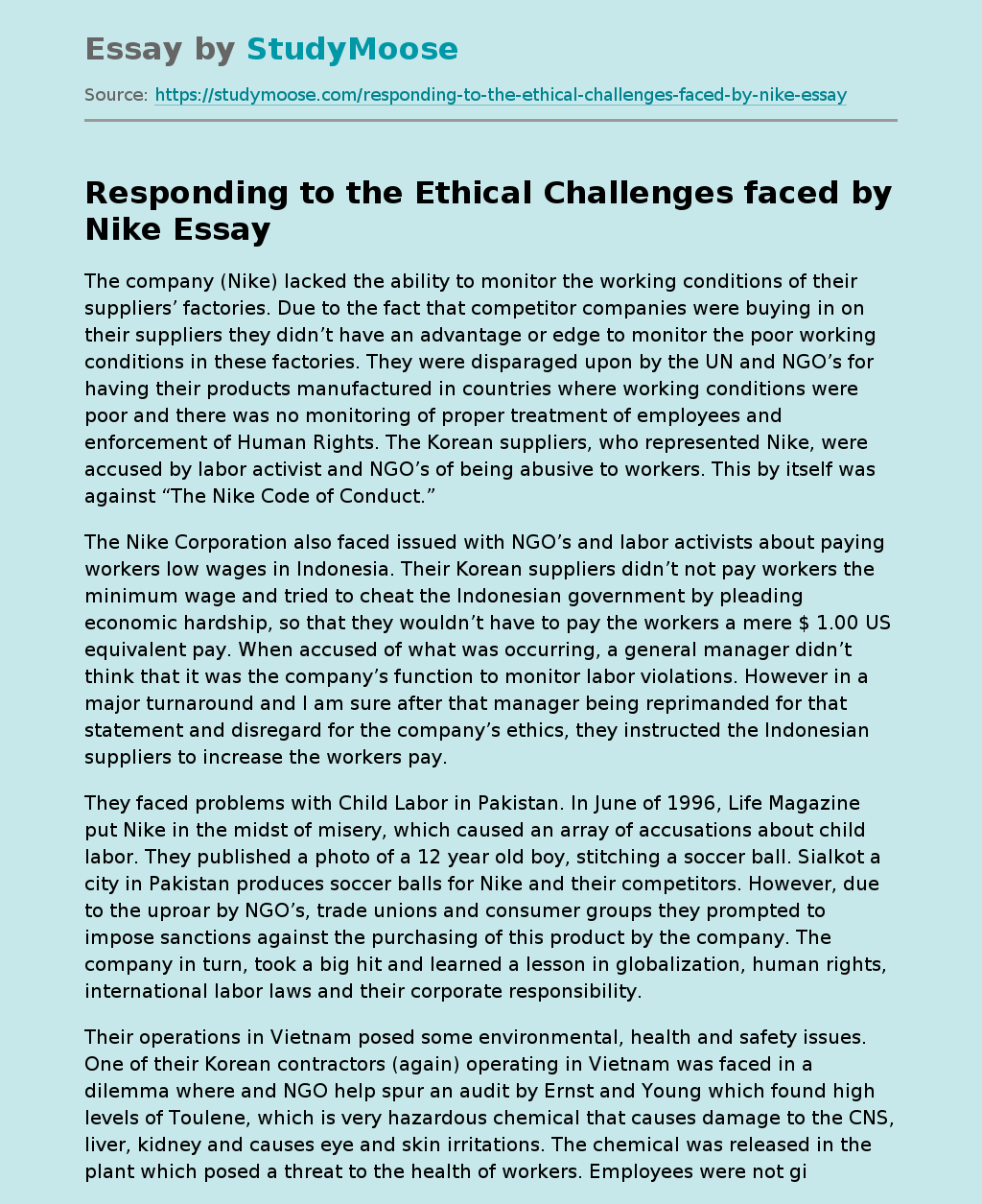