Women have always been second rate when compared to men. They have been thought as tools to do such things as reproduce, cook, clean, and to do the bidding of all males (especially their husbands). Without these qualities woman were considered nothing until the woman’s rights movement of the twentieth century. One of the people who supported this movement was Hillary Clinton.

In one of her most famous speeches: “Woman’s Rights Are Human Rights.”, Clinton tried to address the world in the United Nations Fourth World Conference on woman in order to target those who thought less of women.

Don't use plagiarized sources. Get your custom essay on
“ “Woman’s Rights Are Human Rights.” ”
Get custom paper
NEW! smart matching with writer

This speech was given on September 5th, 1995 in Beijing, China. Some of Hilary Clinton’s credentials for the speech included being first and foremost a female, a first lady, a constant advocate, and being a success in strengthening the local legal aid offices. “She also traveled to more than 80 countries as a representative of our country, winning respect as a champion of human rights, democracy and civil society” (“U.

S Department of State. Diplomacy in Action”) and therefore is knowledgeable not only in persuading others but also in human rights. This is what gave her the right (or ability) to speak of the topic previously mentioned.

In Clinton’s speech she focuses completely on woman’s rights and so as to grab the attention of the nation she compared the meeting of the United Nations World Conference to the realistic and relatable by others; using the appeal to people’s emotions.

For example she uses day to day events such as playing with children or washing clothes in order to connect with the common people. She then maintains the attention of the people by naming the Nairobi conference which was successful in its focusing on the crises of domestic violence.

This is why the audience should care about what she has to say because it can ultimately lead to new and content life for woman everywhere. In her main point about woman, she mentions how they deserve to be healthy and educated and while doing this she chooses several situations which lead to one final outcome: prosperity. She also mentions in a cause and affect manner that when the families of woman flourish, so do their families and then eventually the communities and the rest of the nation. She continues to support the issue of a healthy and educated woman through the story telling of personal experiences that she has gained through 25 years.

These include such situations such as meeting mothers taking out loans to support their family and meeting females that are working to teach literacy to children in
their countries. Through these examples Clinton gives the feeling that woman play a vital role in societies all over the world. Although woman are responsible for all of these things, they are often times gone “unnoticed and unheard” (Clinton). She continues to illustrate the unfair suffering that woman face by watching their young being forced into malnutrition, prostitution and being denied rights that they should naturally have. Although woman contribute to more than half the world’s population, Hilary Clinton states that they comprise of 70 percent of the world’s poor and two-thirds of which are illiterate. Clinton mentions that woman have been abused and raped because they have remained silent but no one should stay silent forever.

No longer should the woman of the world stay in silence and no longer should they be excluded from the everyday political process. It is time that woman’s rights are treated as human rights are. She appeals to the audience of this abuse by giving a little of historical cruelty that has been forced upon woman throughout the centuries. For examples there have been babies that have been denied food, girls sold into slavery, woman burned because their dowries were deemed too small, and girls brutalized through genital mutilation; which are all violations of human rights. (Clinton) In her concluding statement she calls to the people to support woman rights becoming human rights and vice versa. She mentions that it took past a 150 years after the Declaration of Independence for woman to receive suffrage.

She also says that it was successful because it was a bloodless battle. However the big picture has yet to be solved. Woman may have voting rights but they are still abused and treated like trash in many places of the world. Hilary says that in order to get rid of this unfair treatment discrimination and inequities must be eliminated. Woman should be valued for what they do, rightfully paid and educated; they should also be treated. Even though Hilary Clinton’s speech was awe inspiring woman still have a ways to go. Whereas some places have taken Clinton’s speech to heart and allowed woman more health access and protection against harassment, there are still areas in which woman are not treated equally. An example is Vatican City in which woman do not have the right to vote. However even though some places in the world are not giving into woman’s rights, it is fair to say that as a whole the nation has progressed into one in which slowly (but surely) woman’s rights are becoming human rights. 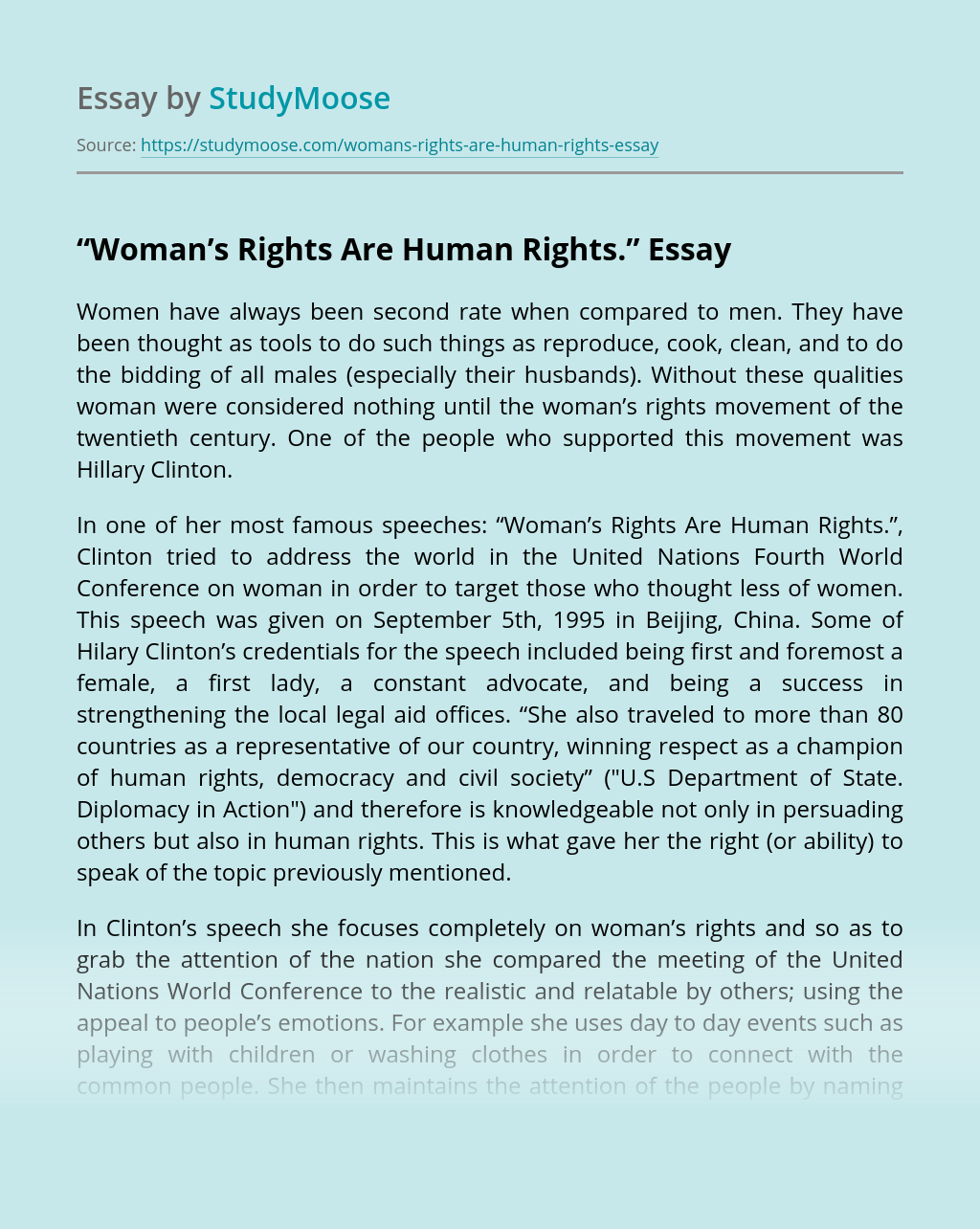