Advantages and Disadvantages of the First and Second Industrial Revolutions

The First and Second Industrial Revolutions helped pave the way for significant scientific and technological advances. This was not without drawbacks, such as poor working conditions, the exploitation of labor, and the use of child labor. As a result, the British Parliament initiated several investigations that changed the way industries operated. This ultimately shaped the way other developing nations would accomplish their own industrial revolutions, and help create the conditions for major science and technology breakthroughs to happen in modern times.

Don't use plagiarized sources. Get your custom essay on
“ Advantages and Disadvantages of the First and Second Industrial Revolutions ”
Get custom paper
NEW! smart matching with writer

According to Thatcher (2009), “The demand for manufactured goods during the English Industrial Revolution had grown to such a level that there was a shortage of workers who were willing to learn the new technologies of the textile mills. ” The demand for workers drove the industrialists to seek new populations to fill the gaps caused by this shortage. This began the hiring of orphaned and impoverished children. Children seemed to be ideal workers for industries because they were young and could easily be taught the skills needed to perform their jobs.

The industrial owners would provide the child labor workforce with the bare essentials to survive in return for their work. This eliminated the need to compensate the workers financially, which increased the profits to the manufacturers. It was not uncommon for children to start working as early as five or six years old, and work as much as sixteen hours per day. Tuttle (2001) described their working conditions by stating that: Children worked under deplorable conditions and were being exploited by the industrialists.

A picture was painted of the “dark satanic mill” where children as young as five and six years old worked for twelve to sixteen hours a day, six days a week without recess for meals in hot, stuffy, poorly lit, overcrowded factories to earn as little as four shillings per week. As such, the British Parliament initiated various Royal Commission investigations that resulted in three laws that would revolutionize the child labor workforce.

The Cotton Factories Regulation Act of 1819 regulated the minimum working age at nine years old and they were only allowed to work a maximum of twelve hours per day. In 1833, the parliament passed the Regulation of Child Labor Law which created government inspectors to oversee factories to ensure they were following child work guidelines. “One of the final regulations that the British parliament passed to regulate working conditions was the Ten Hour Bill of 1847, which limited the working day of women and children to ten hours per day” (Tuttle, 2001).

These laws set the platform for reform as other countries, including the United States, would go through their Industrial Revolutions. They became the foundations by which other laws would be enacted to improve the safety, working conditions, and eventually eliminate child labor in the workplace. The Second Industrial Revolution created the conditions for scientific and technological advances in modern times through harvesting steam power and the creation of the assembly line.

Steam powered engines and hydroelectricity from the Alps allowed for the industrialization of coal deprived northern Italy and other countries throughout Europe. Henry Ford’s assembly line in the United States provided the means necessary to mass produce automobiles while simultaneously creating jobs for many Americans. These assembly lines of personnel would eventually be replaced by machines during modern times, increasing production to meet the growing demand for automobiles the world over.

Advances such as these continued from early industrialization into the modern systems and factories we have today, where a single company can rapidly provide their products to customers around the world. Throughout the First and Second British Industrial Revolutions manufacturers looked for ways to maximize production to meet an increasing demand in manufactured goods, while minimizing the cost associated with supplying their customers. Unfortunately, their cost-effective way of thinking and greed for profit resulted in a child labor workforce, poor working conditions, and no benefits for their employees.

Through the laws and regulations that were established to prevent the same conditions happening today as were seen during the revolutions, employees now enjoy a multitude of benefits, including the minimum wage salary, forty hour work weeks, healthcare benefits, and a workplace focus on safety. The elimination of child labor in the United States ensures that the children of this country can focus on their education instead of working to provide for their families, which will allow for an educated workforce in the future and continue the prosperity of our nation.

Advantages and Disadvantages of the First and Second Industrial Revolutions. (2016, Oct 18). Retrieved from https://studymoose.com/advantages-and-disadvantages-of-the-first-and-second-industrial-revolutions-essay 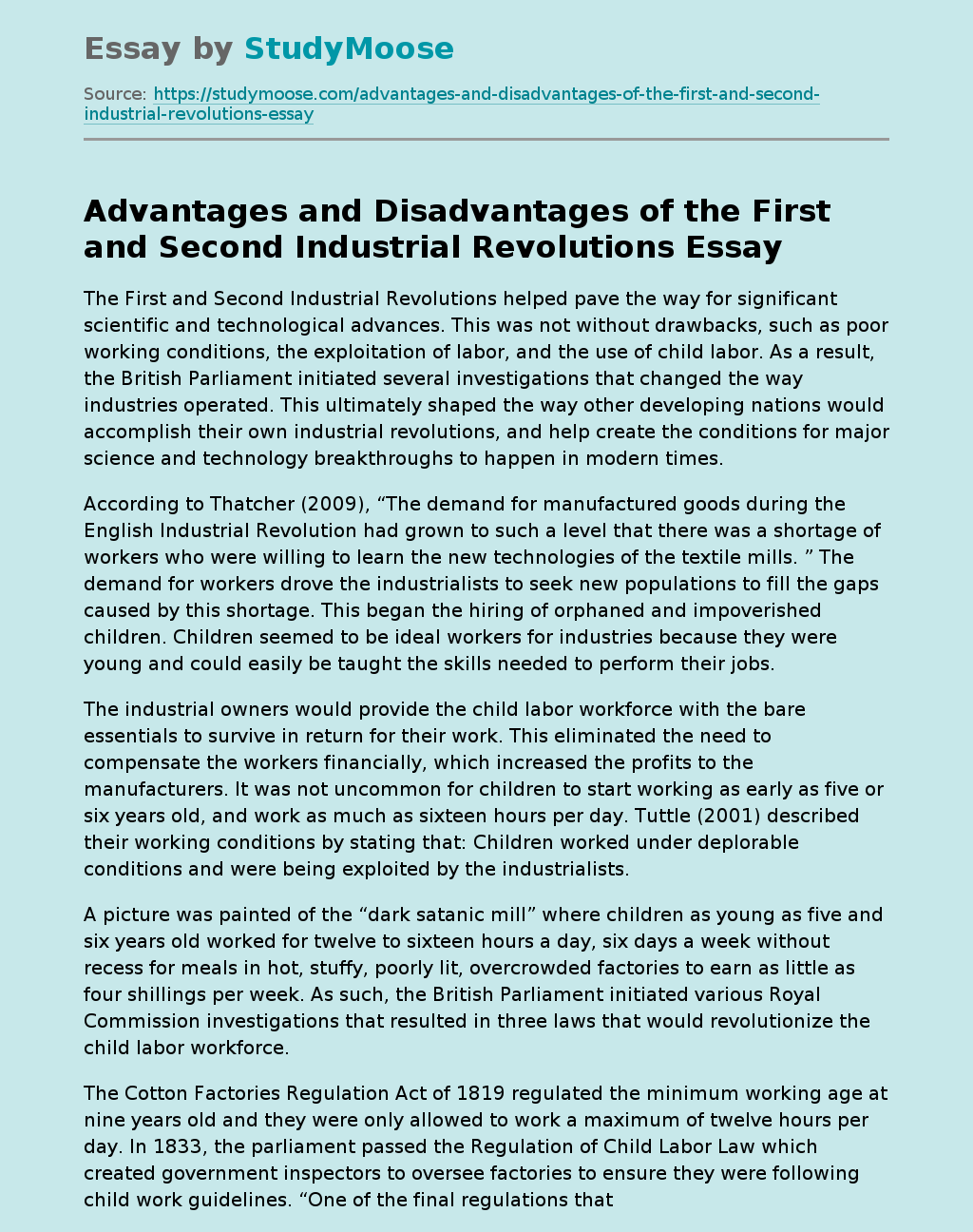