Children hаve always worked, often exploited аnd under less than healthy conditions called child labor. Currently, there аre millions of children working as laborers in different farms and companies in America, аnd they always endure some of the harshest conditions. In fact, workdays often last 10 to 14 hours with minimal breaks during the shifts. Even though children who are involved in child labour may learn how to be productive and may become independent and mature citizens; child labour deprives children of their education, overall health, and dignity.

Don't use plagiarized sources. Get your custom essay on
“ Child Labor in America ”
Get custom paper
NEW! smart matching with writer

Therefore, child labor should be forbidden in America.

Child labor seriously affect the overall health of Children.In the America, child labor has been one of the many concerns in the America. Sadly, child labour is still common in our world today and it still violating children’s health. According to the International Labor Organization, there are approximately 215 million children between the ages of 5 and 17 that currently work under conditions that are considered illegal, hazardous, or extremely exploitative because they and their families are extremely poor.

(Tubeza 2012). Large numbers of children work in commercial agriculture, fishing, manufacturing, mining, and, domestic service. Some children work in illicit activities like the drug trade and prostitution or other traumatic activities such as serving as soldiers. However, children who work will become mature and used to working on their own. For example, a child who works in a clothing factory does not only learn how to sew but he will also be able to earn money for himself and his family as well.

Child labor takes away the opportunity for children to be educated. Especially in poor countries where some families need their children to work and to earn money just to feed their empty stomachs. In some situations, children are forced to drop out of school to work because they need money and food to survive. According to the International Labor Organization head of the Philippines, Lawrence Jeff Johnson, “we have to get to the root of child labor which is linked with poverty and lack of decent and productive work” (Tubeza, 2012). Poverty is one of the major causes of child labour and this is also one of the many reasons why some children need to work.Though it may be true that children can learn how to become independent and productive by working, they can also become productive and independent through attending school. The experience of being educated can be a great skill for their future.

Furthermore, child labour also removes the dignity and freedom of children. Most of the forms of child labour are exploitive and harmful by nature; which consequently, go against the dignity and freedom of children. Millions of children are involved in work that, under any circumstance, is considered unacceptable for children, including the sale and trafficking of children into debt bondage, serfdom, and forced labor. It includes the forced recruitment of children for armed conflict, commercial sexual exploitation, and illicit activities, such as producing and trafficking drugs. (Child labor public education). Although child labor take away the dignity of the children, child labour could be something good is because boycotts made against the laws which were created to prevent child labour may lead to greater consequences such as harming the children rather than helping them. After the Child Labor Deterrence Act, a bill that ‘prohibits the importation of products that have been produced by child labour, and included civil and criminal penalties for violators’ was introduced in the United States, the UNICEF stated that an estimated 50,000 children lost their jobs in the garment industry in American, and were more or less forced to take dangerous jobs such as stone-crushing, street hustling, and even prostitution, and being much more exploitative than their previous garment industry jobs. Boycotts such as this are blunt instruments with long-term consequences that can actually harm rather than help the children involved. (Child labour pros and cons). 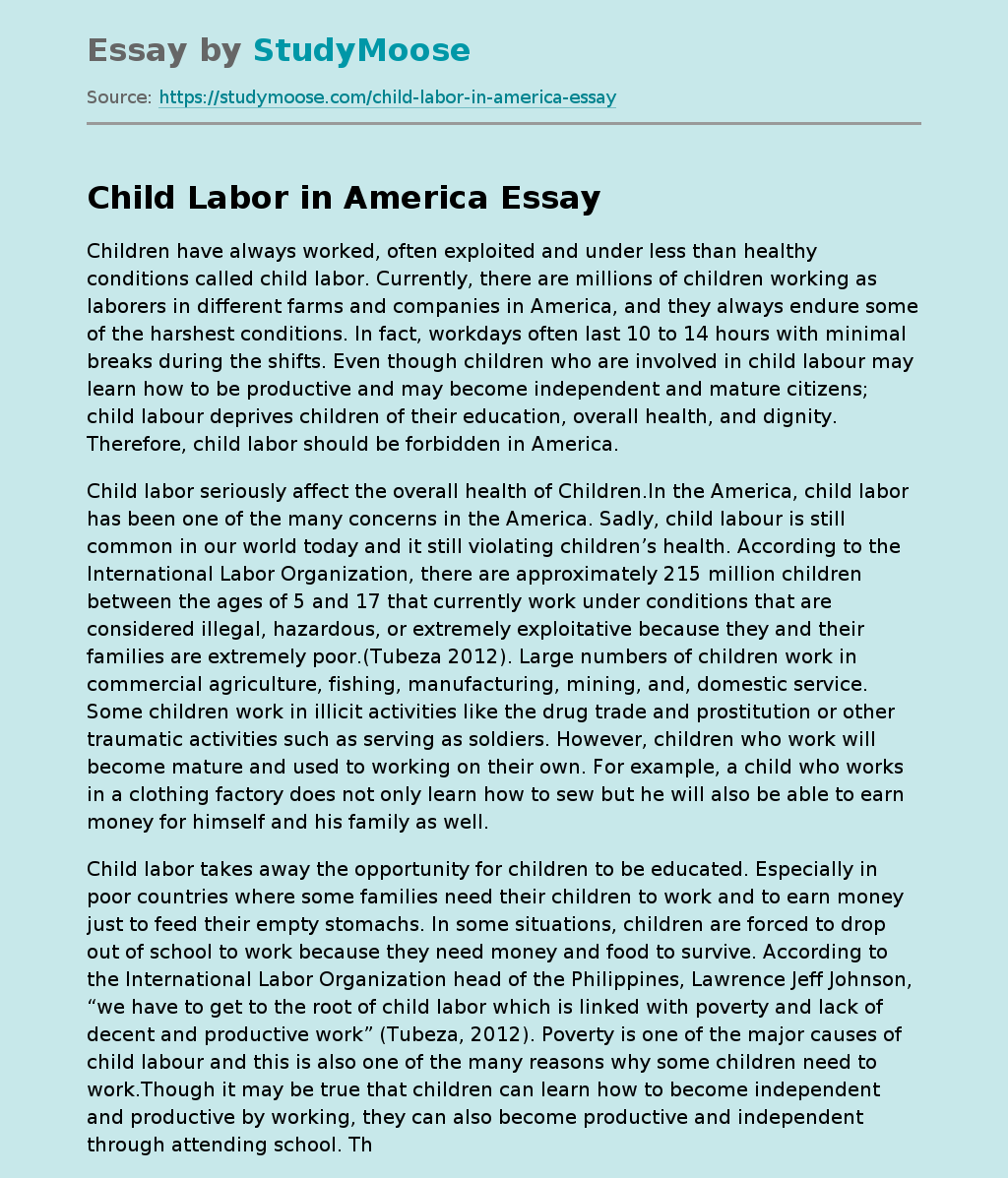