Coming out of the Age of Enlightenment, Europeans were filled with new ideas regarding economics. Grouped with those ideas was a desire to increase production and innovation. This is what ushered in the Industrial Revolution, a rapid development of industry in Britain in the 18th and 19th centuries. From the beginning of the revolution in the late 1700’s, all ages and both genders were used as workers in mills and factories.

More so than in previous eras, children were common employees alongside their elders.

Don't use plagiarized sources. Get your custom essay on
“ Industrial Revolution DBQ ”
Get custom paper
NEW! smart matching with writer

Being children, though, their needs were often overlooked or ignored completely. For the most part, the working conditions of children during the Industrial Revolution were extremely harsh and they received poor treatment. However, some laws and regulations regarding young workers were put into place in order to help and protect them.

Harsh working conditions were one of the many hardships children working in the mills faced. They were often mistreated, as stated in the 1840 novel Michael Armstrong, Factory Boy.

Crews of children in the mills are described as dirty and miserable. They would be whipped for not performing tasks properly or fast enough. From this and the rest of their difficult work, they appeared hideously older than they really were. This novel shows how lowly the children were looked upon. Thought of nothing more than miniature slaves, their treatment clearly matched that title.

This could be attacked on the one ground, though. Even though this novel is from the years of children workers, it was not necessarily written by someone that had experienced it themselves.

Therefore, it could have fault in the subjects written in in. Additionally, many of the jobs the children workers had to perform were dangerous on many levels. From a report of deaths in the year 1838, 58 children under the age of 13 and 60 children from the ages of 13-18 died from accidents inside of the mines. Those deaths reveal the dangers that children faced while working in the mines.

There were countless causes of these deaths, including falling down the mine shafts and gas explosions, all brought upon by the lack of safer working conditions. Lastly, the children were taken to work in the factories and mines at a very young age. In an 1876 testimony by Robert Owen, he tells of what he found out after purchasing an establishment that was previously owned. He found that the children there had been taken from poor-houses between the ages of 5-8 and forced to work.

Most of the time, if they were even able to attend a school, they made slow progress due to the amount of hours they worked and the consequences of that. This displays some of the harm that comes from taking such small children to work in such a hostile environment. Totally, the mistreatment, dangerous jobs, and the young age of the workers all serve as proof that the conditions in the mills were unquestionably harsh.

Coupled with the harsh working conditions, children in the mills were also confronted with poor treatment. First off, the condition of the food given to the workers was inadequate. The food variety was very limited, according to a worker’s description of it in 1849. For two meals a day, they ate oatcake, which was thick and coarse, paired with a potato pie for dinner, which was said to be barely edible. Although they did get three meals a day, they thought that was insufficient compared to the amount of hours they worked each day.

This first-hand account illustrates some of the real-life aspects of living in the mills.The only way they were able to eat the nauseating food they were given is because they were so hungry from the work that they did, they were willing to eat anything. This could be in a position to be ridiculed, still, because it can be said that these were not the worst eating conditions out there. It could have been worse for people outside of the mills and they should be thankful for what they were getting.

Following the quality of the food, the workers also had strict rules upon them during the workday. In a letter by George Courtauld in 1814, he says that the workers were constantly supervised by someone during their work with full attention. He recalls, also, that the workers had to maintain complete silence during the day to help their concentration and to keep order.

This demonstrates the complete control the owners of the mills and mines had on their employees. They were treated as part of the machine they worked on and denied numerous simple comforts. FInally, workers were deprived of a clean working environment. Coming from an article by Edward Baines on factory pollution, he states that the workers were confined in tight spaces for hours on end with no fresh air. Conditions such as this would lead to disease and reduce the vitality of workers. On top of that, the loud noises of the machines in the working rooms were unpleasant and confusing.

These conditions validate how little the mill owners cared about their workers. And, although it’s stated that the workers were accustomed to the noise, it can be assumed that this was just another cause of neglect to them. Thus, the horrible food given to the workers, the strict rules upon them, and the absence of a clean working environment confirm the statement that children in the mills were overcome by poor treatment.

Despite the downsides of children working in the mills, laws and regulations concerning the children workers were put into place in order to help and protect them. Headmost, a law on the amount of hours a child could work a day was passed. From the Health and Morals of Apprentices Act of 1802, no child could be employed for more than 12 hours a day. They could not work between the hours of 9 at night and 6 in the morning. This law implies that people knew that children should not be subjected to as much work as adults and that they were willing to change their hours in the name of their comfort and safety. Furthermore, the children were given proper food and pleasant living/working conditions.

Coming from The Philosophy of Manufactures in 1835, all ages, children included, earned plentiful food and domestic accommodations. They were shielded from the hot or cold outdoors while working and their housing quarters were very spacious. This exaggerates the point that the workers were in phenomenal conditions at the mills. They were treated with such pristine conditions, it’s said, that their housing was of higher quality than that of some of the aristocracies.

This can be questionable, however. Of course a mill or factory owner writing this book would want everyone to think that the conditions were wonderful at mills. Their goal was to make the mills seem like a commendable place so that they could keep attracting workers to them. Additionally, the children were treated very highly by the mill owners.

Written in A Memoir of Robert Blincoe in 1828, the children would be taken to the mills to be transformed into ladies and gentlemen. They were given special privileges, such as being able to ride their master’s houses, having silver watches and plenty of money, and feasting on luxurious foods. They were then taken on to become apprentices until the turned 21.

This memoir establishes how caring some of the mill owners were to their child employees. They were willing to take money from their own pockets to pay for indulgences for them. It is apparent that the owners wanted their children to have the best experience while they were at their mills. Absolutely, the law on working hours, the proper food and living accommodations, and the extremely high treatment of the children workers exhibit that these regulations and laws were put into motion to help and protect them.

Conclusively, it can be seen that the working conditions for children during the Industrial Revolution were indeed harsh, along with their meager treatment. With the positivity of the laws and regulations put down, too, it was not all bad. This revolution helped to change the world as we know it today and helped lead into extensive progresses not only for Britain, but for the world. 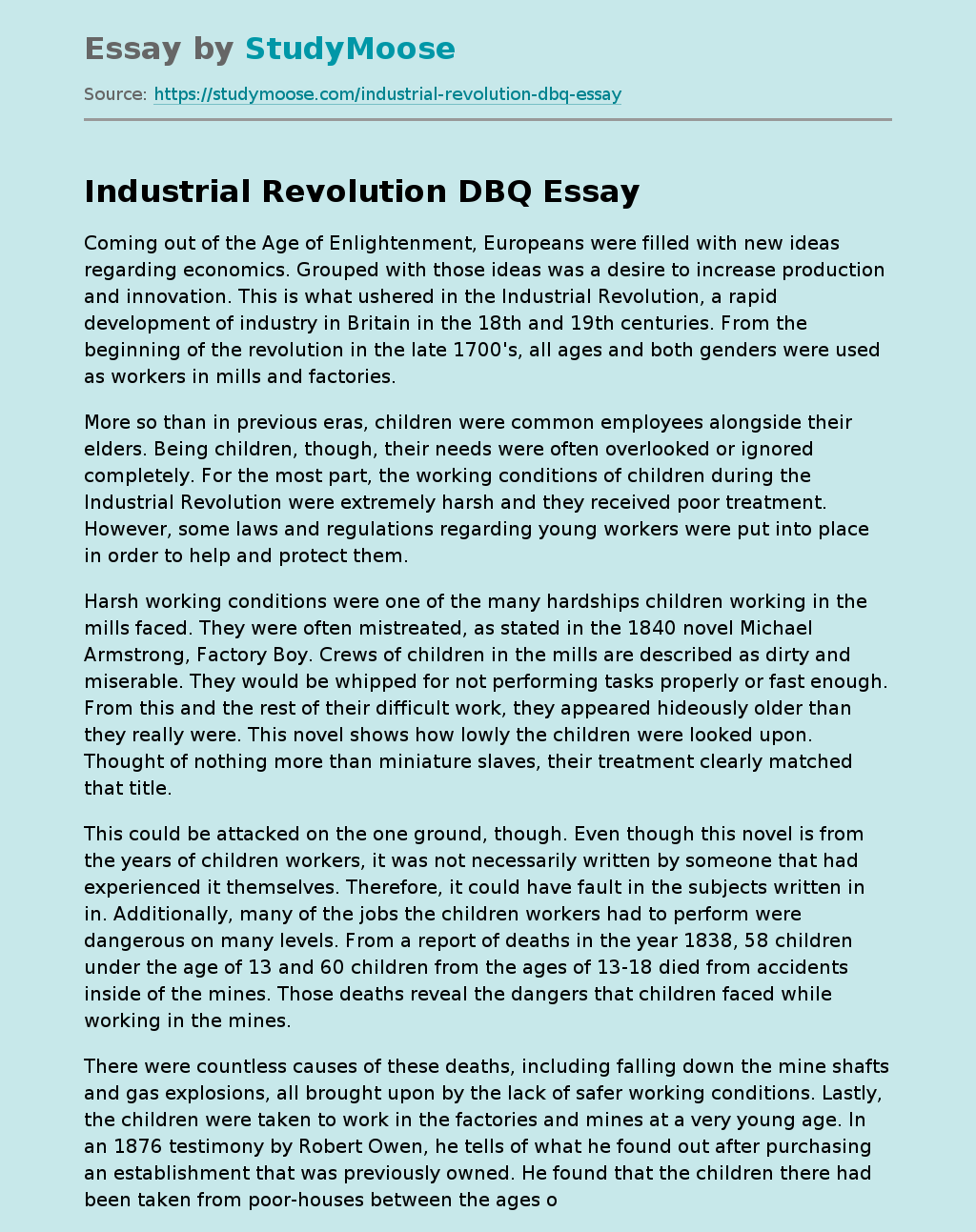