Gender equality has been a prevalent theme writer’s use to deliver their own personal views on the female role in society. This is the case in both “Girl” by Jamaica Kincaid and “The Yellow Wallpaper” by Charlotte Perkins Gillman. Kincaid and Gillman use their works to present a feminist approach on women’s roles and societal standings in their respective eras. Feminism can be defined as a diverse collection of social theories, moral philosophies and political movements, fundamentally motivated by/ concerning the experiences of women.

Don't use plagiarized sources. Get your custom essay on
“ Feminism present in “The Yellow Wall Paper” & “Girl” ”
Get custom paper
NEW! smart matching with writer

These experiences have a tendency to revolve around women’s social, political and economic standings. As a social movement, feminism mainly focuses on limiting or eliminating gender inequality and promoting women’s rights, interests’ and issue in society. Feminist literary criticism is literary criticism informed by feminist theory or by the politics of feminism more broadly.

Its history has been broad and varied. Kincaid and Gillman are two of many writers whose works adopt this criticism as a way in which to discuss their respected lives pertaining to the view and treatment of women by their societies.

In the most common and simple terms, feminist literary criticism before the 1970s (in the first and second waves of feminism) was concerned with the politics of women’s authorship and the representation of women’s condition within literature, this includes the depiction of fictional female characters. The father or in this case the mother of feminist literary criticism, is “Jane Eyre” written by Charlotte Bronte in 1847. Jane Eyre follows the emotions and experiences of its eponymous character, including her growth to adulthood and her love for Mr.

Rochester. The novel contains elements of social criticism, with a resilient sense of morality at its core, but is nonetheless a novel many consider ahead of its time given the individualistic character of Jane and the novel’s exploration of classism, sexuality, religion and feminism.

In its internalization of the action, the story revolves around the gradual unfolding of Jane’s moral and spiritual awareness and all events are colored by a heightened intensity that were previously confined to poetry. Bronte’s story allows her to be labeled “the first historian of the private consciousness” and the literary ancestor of Jamaica Kincaid. Jamaica Kincaid-Girl Jamaica Kincaid was born Elaine Potter Richardson in 1949 in Antigua, in the British West Indies, but changed her name when she started writing because her family disliked her career choice. Her simple change of her name and having to operate under an alias provides and insight to Kincaid’s life. Her family disliking her choice of career gives a suggestion to the societal perception of a woman’s role. Women in society in the 1970s were only beginning to find their voice and Richardson’s family’s disapproval of her career choice, proposes the idea that society were still not comfortable with the newly found voice women had.

Jamaica Kincaid’s “Girl” can be analyzed from a Feminist perspective like Jane Eyre as it also revolves around a young girl’s interaction with her mother. Upon closer examination, the reader sees that the text is a string of images that are the cultural practices and moral principles that a Caribbean woman is passing along to her young daughter. Jamaica Kincaid has taken common advice that daughters are constantly hearing from their mothers and tied them into a series of commands that a mother uses to prevent her daughter from turning into “the slut that she is so bent on becoming” (Kincaid 23). But they are more than commands; the phrases are a mother’s way of insuring that her daughter has the tools that she needs to survive as an adult. The fact that the mother takes the time to train the daughter in the proper ways for a lady to act in their culture is indicative of their familial love; the fact that there are so many rules and moral principles that are being passed to the daughter indicates that mother and daughter spend a lot of time together.

The story is written in the second person point of view, in which the reader is the girl and the speaker (perceived to be her mother) is passing on her interpretation as to what a girl should be. Jeanette Martinez, an English Literature major studying at NYE notes in a paper “Analyzing ‘Girl’ from a feminist perspective”: “the diction degrades women; the word “slut” is used to describe a girl that does not conduct herself like a “proper” lady.” This is an interesting way in which to observe the diction used by Kincaid. The term “slut” is used as a negative comparison in which the mother in the story fears her daughter will become. Kincaid using the term “slut” takes a step in the wrong direction where feminism is concerned. The inclusion of the word and the sexual connotations attached draws attention to women being seen as depraved of morals if they are promiscuous.

This word takes attention away from the real message and goal of feminism; equality amongst men and women. Reducing a woman to being debauched purely on the premise of sexual immorality, takes respect away from women as their moral fiber is not taken into consideration. Martinez then proceeds to discuss how the tone and style of the text can be seen as being “reflective of Kincaid’s own social stand point.” Martinez states, “The tone is commanding; we see a repetitive “this is how” throughout the short story. The style of the short story is in lines, which allows each line to be a command. For example: “This is how you smile to someone you don’t like too much; This is how you smile at someone you don’t like at all;

This is how you smile to someone you like completely’” (Kincaid 24).” The tone and short, sharp manner in which Kincaid decides to communicate the life instructions, is representative of the voice of society and the harsh ways in which it tries to control and impart wisdom/ teachings. The final paragraph is integral to understanding this story from a feminist perspective. Kincaid states; “But what if the baker won’t let me feel the bread? you mean to say that after all you are really going to be the kind of woman who the baker won’t let near the bread?”. This interaction is essential to understanding and indicating Kincaid’s attempts to comment on her society. This excerpt can be interpreted as the mother challenging the girl’s morals. Kincaid uses this instead, to challenge the girl’s strength as a person. It is seemingly ironic that a mother has harshly demanded the young girl to learn all the mother’s habits and methods, not giving the girl much of a word in any of her decisions.

This is Kincaid’s ways to speak directly to her audience and say “how can the voices of society order women and girls alike to act a certain way without giving them the strength to make these decisions themselves?” Kincaid ultimately uses her story to tell women ‘strength is learned through experience, not instruction.’ The Yellow Wallpaper The Yellow Wallpaper is a feminist text, telling a story about a woman’s struggles against male-centric thinking and societal ‘norms’. The text may be unclear to the reader who is unfamiliar with Gilman’s politics and personal biography, yet, it impresses any reader with the immature treatment of the main character, who remains nameless in the text. To the casual reader, the story is one of a good-meaning, but oppressive husband who drives his wife mad in an attempt to help her, but it story illustrates how established procedures of behavior could have distressing effects on the women of Gilman’s time, regardless of the intentions of the source.

By late 20th century standards, the behavior of John, the husband, seems unnervingly inappropriate and restrictive, but was considered quite normal in the 19th century. After learning of Gilman’s life, and by reading her commentary and other works, one can readily see that The Yellow Wallpaper has a definite agenda in its quasi-autobiographical style. As revealed in Elaine Hedges’ forward from the Heath Anthology of American Literature, Gilman had a distressed life; because of the choices she had made which disrupted common conventions—from her ‘abandonment’ of her child to her amicable divorce. Knowing that Gilman was a controversial figure for her day, and after reading her other works, it is easy to see more of her feminist suggestions in “The Yellow Wallpaper.” She carefully crafted her sentences and metaphors to instill a picture of vivid and disturbing male oppression. Her descriptions of the house recall a past era; she refers to it as an ‘ancestral hall’ (Gillman 648) and goes on to give a gothic description of the estate. She falls just short of setting the scene for a ghost story.

The reference to old things and the past can be seen as a reference to out-dated practices and treatment of women, as she considers the future to hold more equality. By setting the story in this tone, Gilman alludes to practices of oppression that, in her mind, should be relegated to the past. Charlotte Gillman’s “The Yellow Wallpaper” and Jamaica Kincaid’s “Girl” are both great examples of feminism being represented in literature. A feminist text states the author’s agenda for women in society as they relate to oppression by a male-controlled power structure and the consequent creation of social ‘standards’ and ‘protocols’. Kincaid and Gillman’s tales respectively, are outstanding examples of this and are great tales in which the writers point out deficiencies in society regarding equal opportunity. Both texts are used by the writers to discuss their respected lives pertaining to the view and treatment of women by their societies. 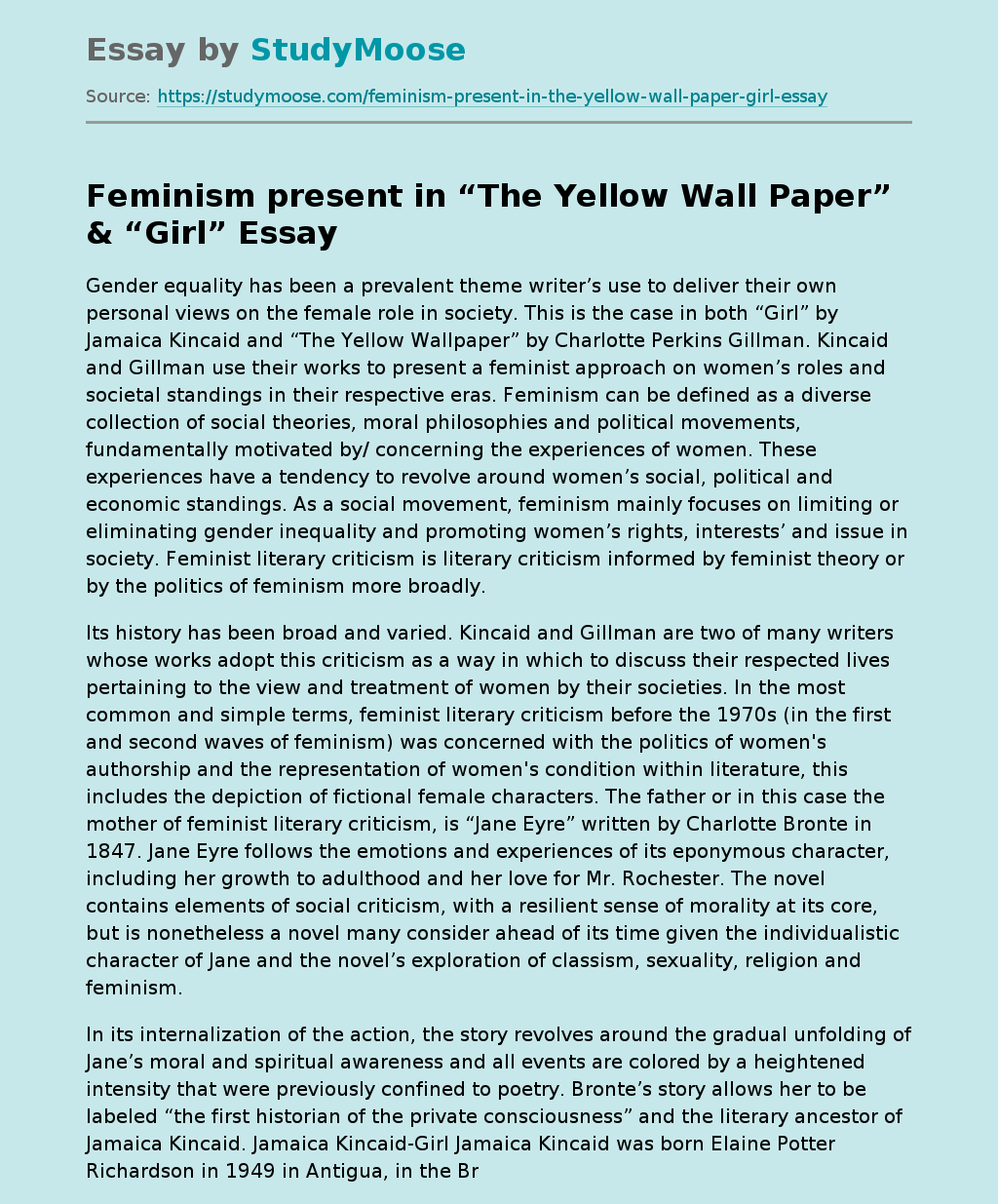