The aim of this paper is to express Feminist Literary Criticism in English Literature, as critical analysis of literary works based on feminist perspective, as well as to uncover the latent dynamics in a novel relevant to women’s interior role in society.

Don't use plagiarized sources. Get your custom essay on
“ Feminist Literary Criticism in English Literature ”
Get custom paper
NEW! smart matching with writer

‘As a social movement, feminist criticism highlights the various ways women in particular have been oppressed, suppressed and repressed…’ (Bressler 185) One of the most potent aspects of feminist literary criticism is to uncover the latent dynamics in a novel relevant to women’s inferior role in society. Feminist Literary Criticism is the critical analysis of literary works based on feminist perspective. In particular, feminist literary critics tend to reject the patriarchal norms of literature, which privileges masculine ways of thinking/points of view and marginalizes women politically, economically and psychologically. Modern Feminist Literary critics had its roots in the past-World War II, feminist movement that spilled over into the intellectual circles of America’s colleges and universities. However, the true origins of the movement can be traced as far back as the late 18th century with Mary Wollstonecraft’s: ‘A vindication of the rights of women” (1792).

com Feminist literary criticism in english literature 173 edge theoretical work in women’s studies and gender studies by “third wave” authors. In the most general and simple terms, Feminist Literary Criticism before the 1970sin the first and second wave of feminism was concerned with the politics of women’s authorship and the representation of women’s condition within literature.

Since the development of more complex conceptions of gender and subjectivity and third-wave feminism, feminist literary criticism has taken a variety of new routes, namely in the tradition of the Frankfurt School’s critical theory. It has considered gender in the terms of Freudian and Lacanian psychoanalysis, as part of deconstruction of existing relations of power. Feminist Literary Criticism concern with the representation and politics of women’s lives has continued to play an active role in criticism.

HOW DOES FEMINIST LITERARY CRITICISM APPLY TO “PRIDE AND PREJUDICE”

by Jane Austen Central to the diverse aims and methods of feminist criticism on ‘Pride and Prejudice’ are focused on patriarchy, the rule of society and culture by men. There was a popular question: ‘Are not …women and men equal in all respects? Feminists’ studies, feminist theorists, and feminist critics all answered in one accord: ‘No!’ (Bressler 167). This question and vehement reply from Bressler’s text emphasizes a gender difference between men and women; one example of this can easily be seen in Pride and Prejudice through the manner of entitlements in the novel. Patriarchy can be seen in Jane Austen’s novel in the form of existing system of entailment. Entailment in Pride and Prejudice, the restriction of future ownership of real-estate to particular descendants, is limited solely to male heirs. As Mr Bennet has no male children, his estate will be entailed to Mr Collins as opposed to his own daughters. There is a part in the novel that demonstrates the above stated: ‘Oh my God’ crie[s] his wife…, ‘I do think it is hardest thing in the World, that your estate should be entailed away from your own children…’ (Austen 45).

With the imposition of entitlement in Austen’s novel comes a pressure for women to marry and search for a husband to attain a better life. This is the case with Charlotte Lucas; ‘accepted [Mr Collins] solely from the pure and disinterested desire of an establishment, cared not how soon that establishment were gained’ (Austen, 91). In writing that, Charlotte Lucas married for sake of a future in a male dominant society where the future would not be possible otherwise. Austen can be seen to be criticizing the role of the female in the setting of Pride and Prejudice. As Charlotte goes on to say to Elizabeth in regard to her marriage with Mr Collins, ‘…I hope you will be satisfied with what I have done. I am not romantic you know. I never was. I ask only for comfortable home; and considering Mr Collins character, connections, and situations in life, I am convinced that my chance of happiness with him is as fair as most people can boast on entering the marriage state’. (Austen 93)

This further demonstrates the point that Charlotte in a male dominant society, felt compelled to marry in order to secure her own future. As one of the most significant development in literary studies in the second half of the 20th century, feminist literary criticism advocates equal rights for all women (indeed, all peoples) in all areas of life: socially, politically, professionally, personally, economically, aesthetically, and psychologically. Feminist literary criticism advocates equal rights for women, so it would be opt to pay attention to an occasion in which Elizabeth Bennet claims equally with another upper class man, Mr Darcy. Again in the same quarrel with Lady Catherine de Burgh, Miss Bennet claims: “I am marrying your nephew, I should not consider myself as quitting that sphere [in which I have been brought up]. He is a gentleman; I am a gentleman’s daughter; so, for me we are equal”. (Austen 258) In this instance Miss and Mr Darcy is to epitomize the very cause of feminist literary criticism-to chiefly advocate for the rights and equality of women. Feminist critics say that women must marshal a variety of resources to assert, clarify, and finally implement their believes and values”. (Bressler 182)

In regard to this quote, Elizabeth Bennet indeed clarifies and implements her own beliefs and values. On marrying Mr Darcy, free from social restrictions, Elizabeth said to Lady Catherine de Burgh: “I am only resolved to act in a manner, which will, in my own opinion, constitute my happiness, without reference to you, or to any person so wholly unconnected to me”. (Austen 260) As such Miss Bennet articulates her own role and place in society, although still only as a housewife, but a housewife that marries for love and her own values as opposed to the society dictated “values” of wealth and a vast fortune. Elizabeth is a perfect example of a feminist character. Not only is she unlike them, but also she does not allow her originality to interfere with her happiness. In this aspect, Austen celebrates the woman who can easily be seen as man’s equal. Elizabeth is a third wave feminist and head of her time because she does exactly what she wants in the end.

Feminist critics approach literature in a way that empowers the female point of view instead, typically rejecting the patriarchal language that has dominated literature. (Paul Ady, associate professor of English at Assumption College in Worcester, Massachusetts). Feminist literary criticism in english literature 175 Although the road is rocky, the characters ultimately prevent their debt to society from interfering with any attempt at personal happiness, which in my opinion is the backbone of feminism. 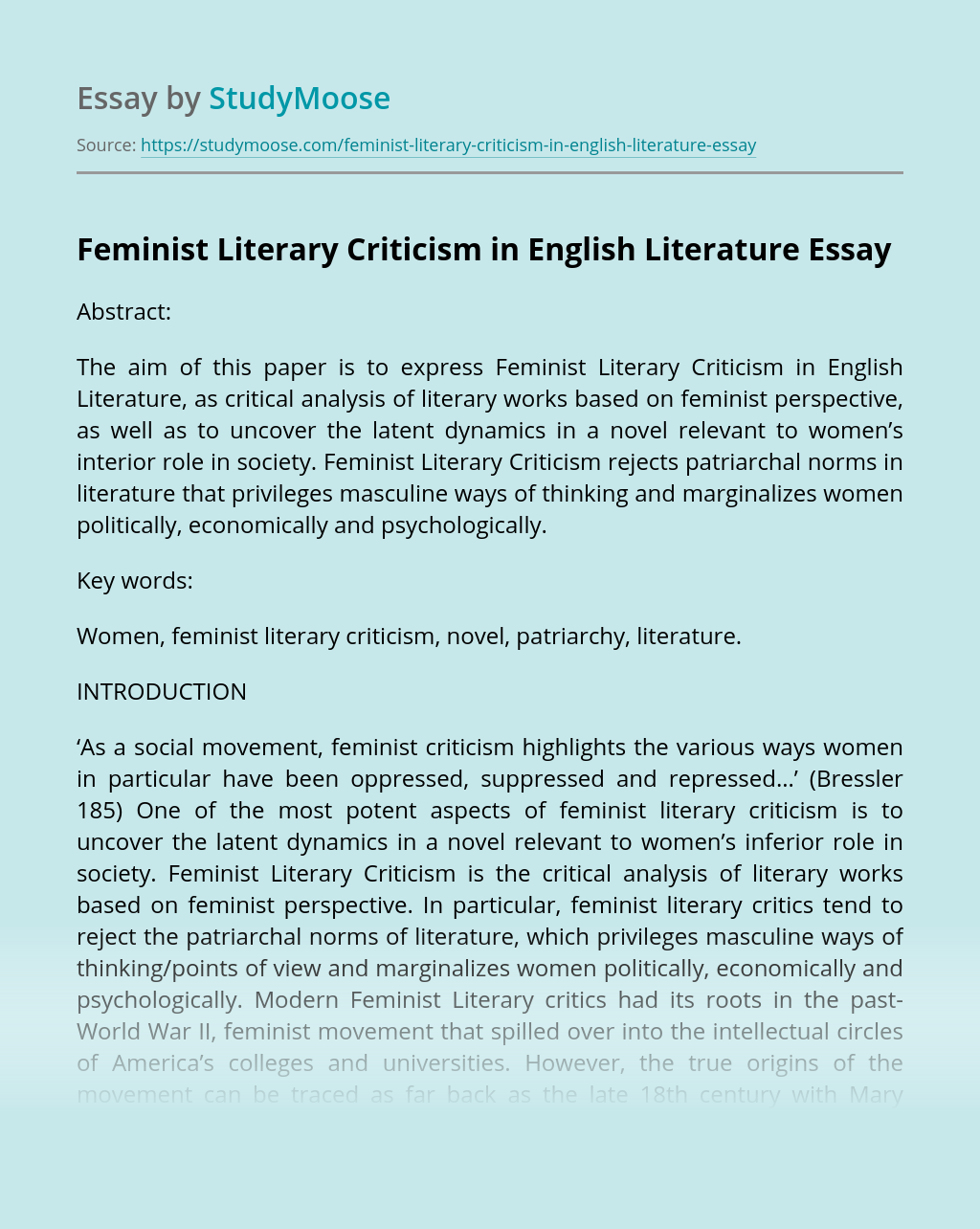