Adolescence, the period after middle childhood, is a very crucial time in the life of an individual. Adolescence (age eleven through nineteen or twenty) is the time between childhood and adulthood and is accompanied by major physical, cognitive, and psychosocial changes. For this observation, I will be observing my roommate, Amore, who is eighteen-years-old. Physically, I will be investigating puberty and health. Cognitively, I will be examining Kohlberg’s view on moral reasoning and influence on school achievement. Psychosocially, I will be analyzing identity and commitment.

Don't use plagiarized sources.
Get Your Custom Essay on Family Observation Paper Just from $13,9/Page

My roommate, Amore, also happens to be my best friend. We met in high school and both made plans to begin our adventure by attending FSU. For this paper, I observed her talking to one of our friends about her faith. It was a Friday evening and one of our friends had just broken up with his girlfriend and was very down about it so he had come over for some advice. She sat with him in the living room and took advantage of the opportunity to present Christ to him a real and powerful way.

Amore is eighteen-years-old, about five foot two, and was wearing jean shorts and a plain white tee. Under the strenuous situation, she took the initiative to pray for him upfront, before she gave her personal advice. She spoke very maturely, but what stood out most about her conversation with out friend was how genuine everything she said was. As opposed to advice that seemed scripted and edged, you could tell that she was speaking from experience. Her eloquence and confidence seemed to greatly ease the pain and disdain that very evidently clouded the room. Her mannerisms and speech were so simple, yet so impacting. It was very clear that, after speaking with her, our friend felt at much better ease and was beginning to look at his situation from a different perspective.

Physical development refers to the body’s development of different skills. Included in physical development are puberty and health. Puberty is the process by which a person attains sexual maturity and, thus, the ability to reproduce. Amore began menstruation at the very young age of ten. According to the book, factors present in her life at the time could account for such an early start. For example, statistics show that young girls who have absent fathers in their lives are likely to begin puberty at a much younger age than a child who had a present father. Similarly, girls whose mother’s are strict (many times, because they have to take on the role of both mother and father) are also more likely to menstruate earlier. Both circumstances were evident in Amore’s life and could thus account for premature puberty.

Health is defined as a state of complete physical, emotional, and social well-being. In adolescence, physical activity decreases throughout high-school years. However, the opposite was true in Amore’s life. She began karate in middle school and, as the years progressed, her training intensified. Consequently, her high school years had the most intense physical activity. Poor sleep patterns, which include going to sleep late and oversleeping, are evident in adolescent years. This is true in Amore’s life. She goes to sleep very late, sleeps well into the later afternoon, and takes naps throughout the day.

Memory, thinking, language, and perception are all components of cognitive development, a field of study in neuroscience and psychology. Included in cognitive development are postconventional morality and active engagement. Kohlberg’s levels of morality described three levels of moral reasoning, the last of which is postconventional morality. It is in this third level of morality that people follow internally held moral principles and can decide among conflicting moral standards. Amore shows that she has reached the third level of Kohlberg’s theory because she is able to recognize conflicts between moral standards and makes her own judgments accordingly.

For example, when she was advising Edgar, she recognized that it isn’t okay to lie to your significant other, but given his situation, his actions were justified. Active engagement is defined as the attention, interest, investment, and effort students expend in the work of school. Amore definitely exemplifies active behavior in her secondary work-studies. Coming from a low-income family, she was taught the value and importance of going to school and making something of yourself. She is very attentive in class, punctual, and exerts maximum effort.

Psychosocial development involves an individual’s interaction with their environment and their peers. Included in psychosocial development are identity and commitment. Identity is defined as a coherent conception of the self, made up of goals, values, and beliefs to which a person is solidly committed. Typically, one’s search for identity comes into play during the adolescent years. At eighteen years of age, it is clear that Amore is steadfast in her identity, knowing exactly who she is.

As a committed Christian, Amore is able to identify herself as a child of God, confidently seeing herself through His eyes. Commitment is Marcia’s term for personal investment in an occupation or system of beliefs. According to Marcia’s identity status, Amore has reached identity achievement. There was a time of crisis where she gave much thought to what she aspired to be in life and how she could use God’s gifts and talents to reach others. She made the decision to use her life to help fight human-trafficking and has made steps to strongly commit to such an involvement.

All in all, Amore displays a very healthy and mature standpoint in her adolescent stage. Physically, cognitively, and psychosocially, she excels in all areas. It is evident that her actions are very much in line with her developmental age. I believe she is developmentally on target and is on schedule for normal developmental growth. 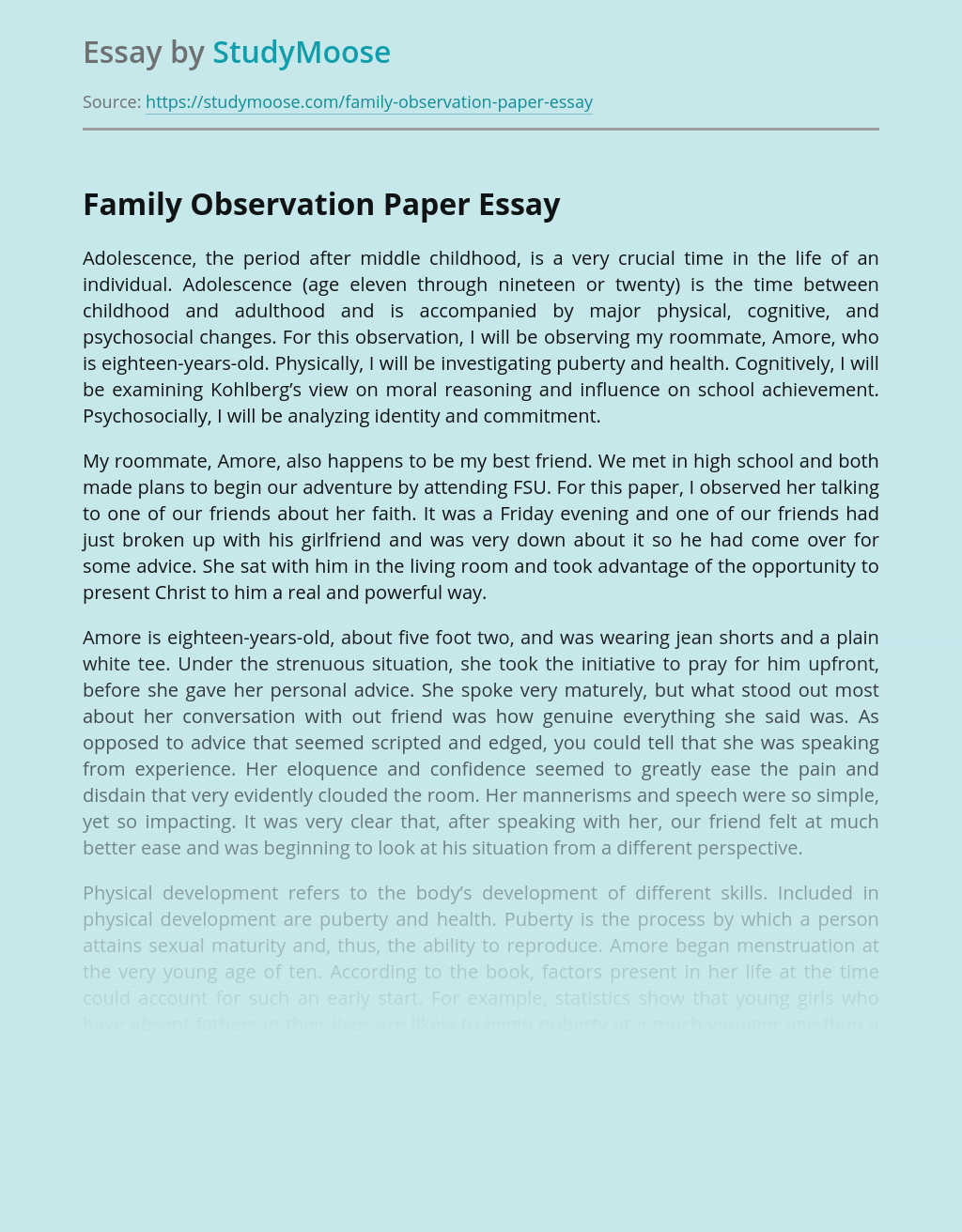 Most of the parents don’t know when their children have the right age to start dating. I t appears that kids are rushing to experience everything in society much earlier these days. One of Those activities that children are experiencing at an earlier age is dating. There are number of views on that ideal age... VIEW ESSAY

View sample
The Effects of Social Networking on Teenage Lives

The life of an average teenager is filled with excitement, curiosity, love, and the constant addiction into the world of social networking. Teenagers seem to have this double life when interacting with different social networking sites. From Facebook to Twitter to online games and game systems, teens are overloaded with several options to stay connected... VIEW ESSAY

Children must pass through several stages, or take specific steps, on their road to becoming adults. According to the U.S Department of Health and Human Services the term adolescence is commonly used to describe the transition stage between childhood and adulthood. Adolescence is also equated to both the terms “teenage years” and “puberty.” They also... VIEW ESSAY

View sample
“Saplings In the Storm” by Mary Pipher

In her essay “Saplings In the Storm,” Mary Pipher discusses the changes girls face once they hit adolescence. Through figurative language and tone her essay successfully expresses what the young women go through. In her “Sapplings in the Storm” essay, Mary Pipher brings attention to the struggles, changes, and hardships young girls experience when they... VIEW ESSAY