Vincent Van Gogh’s Starry Night is probably his most famous painting. Instantly recognizable because of its unique style, this work has been the subject of poetry, fiction, CD-ROMs as well as the well known song “Vincent” or “Starry, Starry Night” by Don McLean. Starry Night was painted in the mental asylum of Saint-Remy, 13 months before Van Gogh’s death at the age of 37. This exemplary painting was made using oil paints on a canvas with the size of 72cm x 92cm and dates to around June of 1889.

Don't use plagiarized sources. Get your custom essay on
“ Van Gogh’s Starry Eyes Brings Out a Starry Night ”
Get custom paper
NEW! smart matching with writer

There are many visible objects incorporated into this great work of art. The painting includes an 11 star and crescent moon filled night sky, a mountainous background of a small Dutch cityscape with a large building, which appears to be a church. Finally, to the left foreground of the picture is an overpowering dark likeness of what appears to be flames. The sky also appears to be swirling viscously with wind. Starry Night is currently on exhibit in Atlanta where it has been since 2000.

As I began my formal analysis of this piece of art, I decided that structure and classification are very important. As I began to analyze the painting’s structure, I realized that I must mention the element and design principles used. Starry Night uses many elements in its structure such as line, shape, value, color, and texture. The element of line is used in many areas but mostly in the rotating curves in the sky, which show the lines direction and thrust.

The element of shape is used throughout the painting. It helps recognize the moon, stars, and a difference between the sky and ground. Starry Night also incorporates value by a difference in the lightness and darkness in the color of each star making them individual in their own way. Color is vividly used throughout this artwork. The sky and cityscapes use a variety of cool colors (blue and green), while the stars and moon use the warm color of yellow. These colors are used to vividly express Van Gogh’s feelings in his time of mental distress.

Finally, the element of texture is used with rough areas in the sky on the swirling air pathways. Starry Night uses all of the design principles in its canvas. The total effect of the art piece(Unity) is achieved due to the dominance of the sky to the sub ordinance of the city. The point of interest, which is the wirl in the sky, achieves Balance then the viewer views the painting from that point outwards in an even manner. Next, the movement or progression of the swirl of air in the middle of the artwork achieves Rhythm. Finally, Proportion is achieved because the scale of the city to the sky contains a very good size and shape relationship. As I move on in my criticism of the piece of art I realize that the classification is also very important. I feel that the style of art that Van Gogh uses is objective accuracy. All the devices of objective accuracy are present in Starry Night. Size and Shape Relationship, Illumination, Focus, Color, and perspective are all visible in this painting. I feel that Van Gogh’s influences include Impressionism as the most visible to his viewers and fans.

Now I will try to interpret what ideas and emotions Van Gogh was trying to convey in to this masterful piece of art. This painting served Van Gogh as a release from his mental anguish that he was suffering at its conception and completion. This year was probably the most difficult of his entire life. It would also prove to be one of his most creative as an artist. After cutting off part of his left ear in Arles, Van Gogh voluntarily confined himself to the institution in Saint-Rémy. Throughout the course of his year there Van Gogh would battle his own personal demons, but would also produce many of the best works of his career. At times Van Gogh would be completely incapacitated by his illness, but during his more lucid times the staff at the asylum would allow him to work outdoors and pursue his art.

This painting was painted inside and by memory, as he had no actual subject for it other than what was present in his battered mind. Van Gogh loved painting outside and this may, in part, explain why the emotional impact of the work is so much more powerful than many of Van Gogh’s other works from the same period. I feel that the 11 stars of the painting may have a biblical significance as related to the story of Joseph in the Old Testament. ‘Look, I have had another dream’ he said, ‘I thought I saw the sun, the moon and eleven stars, bowing to me.’ Genesis 37:10. Whatever it may have meant to Van Gogh, I feel the painting just expresses his want and desire to be normal and able to understand what ails him mentally. I appreciate the vivid colors of extreme brushwork and emotion conveyed through this great piece of art.

Finally, as I near completion of my criticism of this wondrously emotional piece of art, I realize that I must compared its rank or relevance with other pieces of art of the time period and of Van Gogh himself. I feel that this oil painting conveys Van Gogh’s tortured mind state and compares greatly with the turbulent brushstrokes of Wheatfield with Crows (see picture 1). Wheatfield with Crows was painted on the same oil on canvas structure in 1890. Both paintings show the progression of mental anguish of Van Gogh accurately. Both also has extremely agitated brushworks and their colors show a certain stint of emotion conveyed through art.

Starry Night also compares to Armand Guillaumin’s Sunset at Ivry (see inset) from 1873. Both images convey the artists’ views of a landscape and how it can be altered by different mediums. I feel the technical mastery of Van Gogh in this time of mental anguish help to make the total effect of Starry Night his best work by far. In Conclusion, I feel that Starry Night is a combination of tortured emotions with a hint of a love for nature. I feel that this painting is the best of its time period. This piece of art will outlast many others as the best emotionally charged work by Vincent Van Gogh. 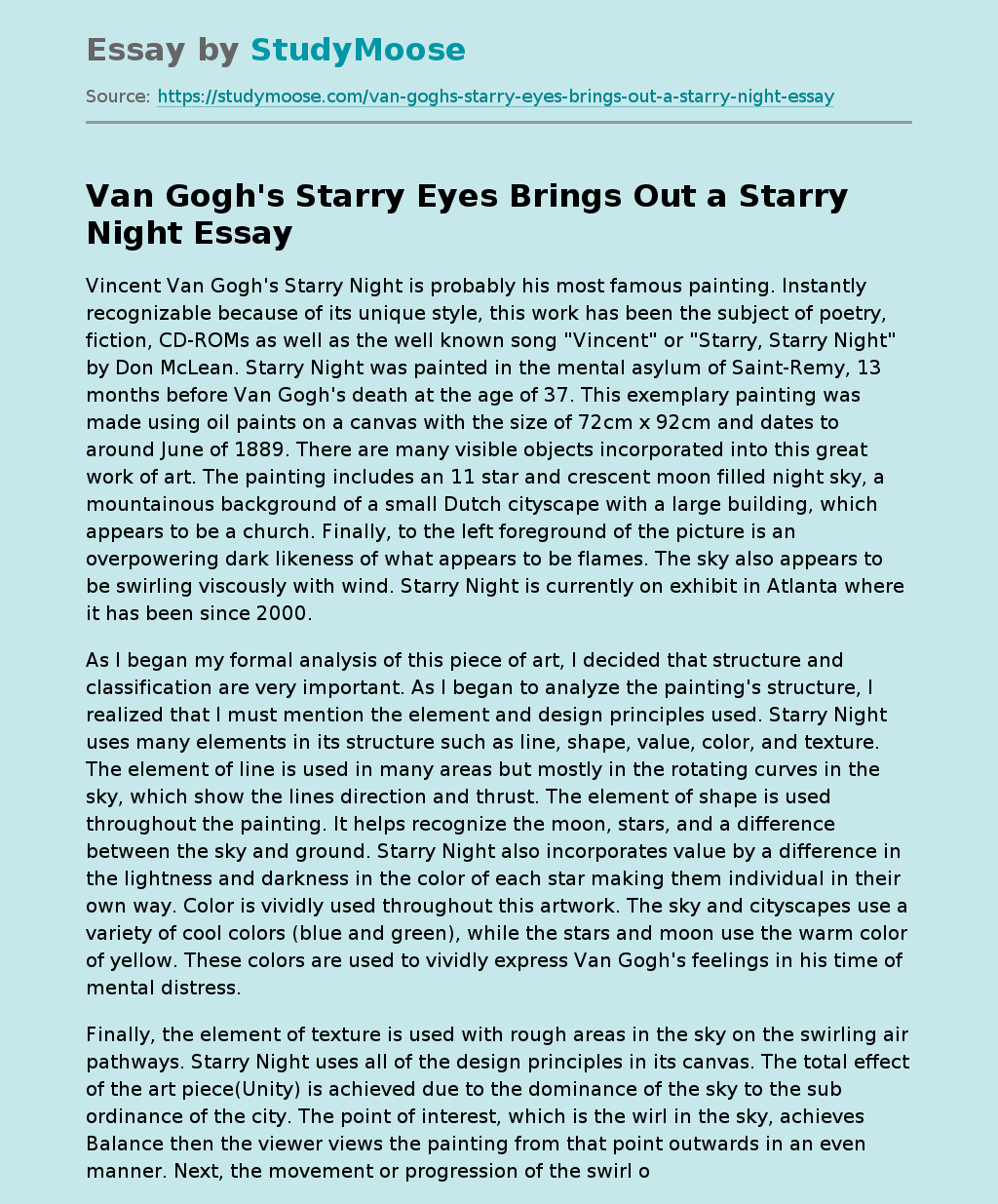