Exploring the Paradox of Sad-Film Enjoyment

Negative content has always been of particular interest to people. Tragedy, horror, and drama have long been popular genres in the art industry, from The Epic of Gilgamesh to a current box office success, It: Chapter 2. Despite our continued attraction for such art, the question must be asked as to why viewers like what leaves them feeling sad? This paper examines the three recurring processes that direct the relationship between sorrow and enjoyment of sad films. It is believed that people consciously choose to view negative content in art to experience stimulation at a psychological distance, to feel moved, and to experience a self-reflection into one’s own life and relationships.

Don't use plagiarized sources. Get your custom essay on
“ Exploring the Paradox of Sad-Film Enjoyment ”
Get custom paper
NEW! smart matching with writer

Psychological distance is the cognitive ability for a person to separate themselves at a certain point in time from objects, people, or events occurring at that same moment. To take on a psychological distancing perspective, the observer may see certain objects or events as being removed or at a detached state to protect their frame of mind from a threat or reduce emotional impact.

It is through this concept that many believe that modes of psychological distancing allow people to enjoy negative content in films by means of withdrawn viewing. In their (2007) study, Andrade and Cohen tested the relationship between a protective frame of mind with a coactivation of valence emotions when partaking in aversive activities. Through their experimentation, the results displayed that a protective frame of mind allows viewers to experience a form of pleasure from the negative experience.

Helping the viewers comprehend that the aversive stimuli (in the context of the study) was a “just a movie” and the characters portrayed in the horror film were “just actors” subdued the negative emotions provoked through the consideration of the content.

To better understand psychological distancing we must understand that cognitive separation can occur via many perception cues. For example, understanding the context of negative art can act as a method of psychological distancing. Studies have shown that specific art contexts can alter cognitive processes and create certain expectations. Research by Gerger, Leder, & Kremer (2014) supports this claim by determining whether an art context changes the way people experience stimuli of valence emotions. Having perceivers view objects through a realistic or artistic lens allowed people to process the art differently.

Contexts, like viewing a picture taken from an art book or a museum, provide certain details with how a perceiver should react to the art object. The awareness that a certain object is art and belongs in certain contexts empowers people to view the art as posing no health risk to the viewer nor as having any non-fictitious aspects. Such cognizance legitimizes the psychological distances embedded in the audience and averts potential dislike aimed at the negative content. The (2014) study also found that an adopted distance mode of processing (viewing art with an art context point of view) increased liking to negative artworks. Not only does an art context allow spectators to suppress emotional responses to the negative content, but it also shifts the spectator’s attention to a more detailed evaluation of the art, leading to a more satisfying experience. In such a frame of mind, the observer can better focus on style, form, or skill, rather than just the overall depiction of the subject matter.

To elaborate more on the idea of artworks posing no real threat to the individual, Van Dongen, Van Strien, & Dijkstra (2016) presented their study on emotional regulation and viewing art. While the former study focused on the actual context the art was viewed in, this present study has an emphasis on the type of art exhibited: works of art of staged events versus photographs depicting real events. The situational difference between viewing a picture as artwork or viewing the picture as a real-life photograph imposed higher likeability ratings for the pictures framed as artworks. Because people associate artworks with rather safe environments such as museums or galleries and positively correlate artworks with fictitious characteristics, the negative content portrayed in the art object prepares the viewer’s expectation that the aversive picture will pose no threat to their well-being and is artificial. Like the Gerger et al., (2014) study found, Van Dogen et al. (2016) also discussed that this distanced mode of safe assessment stimulated greater appreciation to the visual design elements, rather than just the content of the negative stimuli.

A second cognitive process related to the enjoyment of sad films includes the state of being moved. The concept of being moved has long been quoted and used in appreciation of art mediums, but only recently has become a popular topic of research. Although the concept has no set definition, being moved is an intense but overall positive experience figuratively moving a person to a state of overpowering felt emotions. These emotions can include empathy, sadness, felicity, and self-actualization. The state of feeling moved can transform the inflicted mixed emotions felt from the art into a pleasurable experience.

Numerous studies, like Mori & Inwanga (2017), have connected the state of emotional impact with the elicitation of chills and tears. In testing the emotional factors contributed to feelings of being moved, Mori & Inwanga (2017) determined the psychophysiological differences between art-elicited tears and chills and describe the relationship between the peak expressions and why we experience pleasure from sad content. As stated in previous studies, when viewing negative art, people experience mixed emotions: a combination of both pleasure and sadness. What this current study is unveiling is the concept of peak emotional responses as characterizations of mixed emotions. Art-elicited chills have a positive relationship with simultaneous feelings of happiness and sadness. Although the mixed emotions of tears were also stimulated by happiness and woe, this peak emotional response is different from chills. The difference between the two peak responses is that tears serve a cathartic function to sad art, while chills activate a rewards function.

Exploring the Paradox of Sad-Film Enjoyment. (2019, Dec 14). Retrieved from https://studymoose.com/exploring-the-paradox-of-sad-film-enjoyment-essay 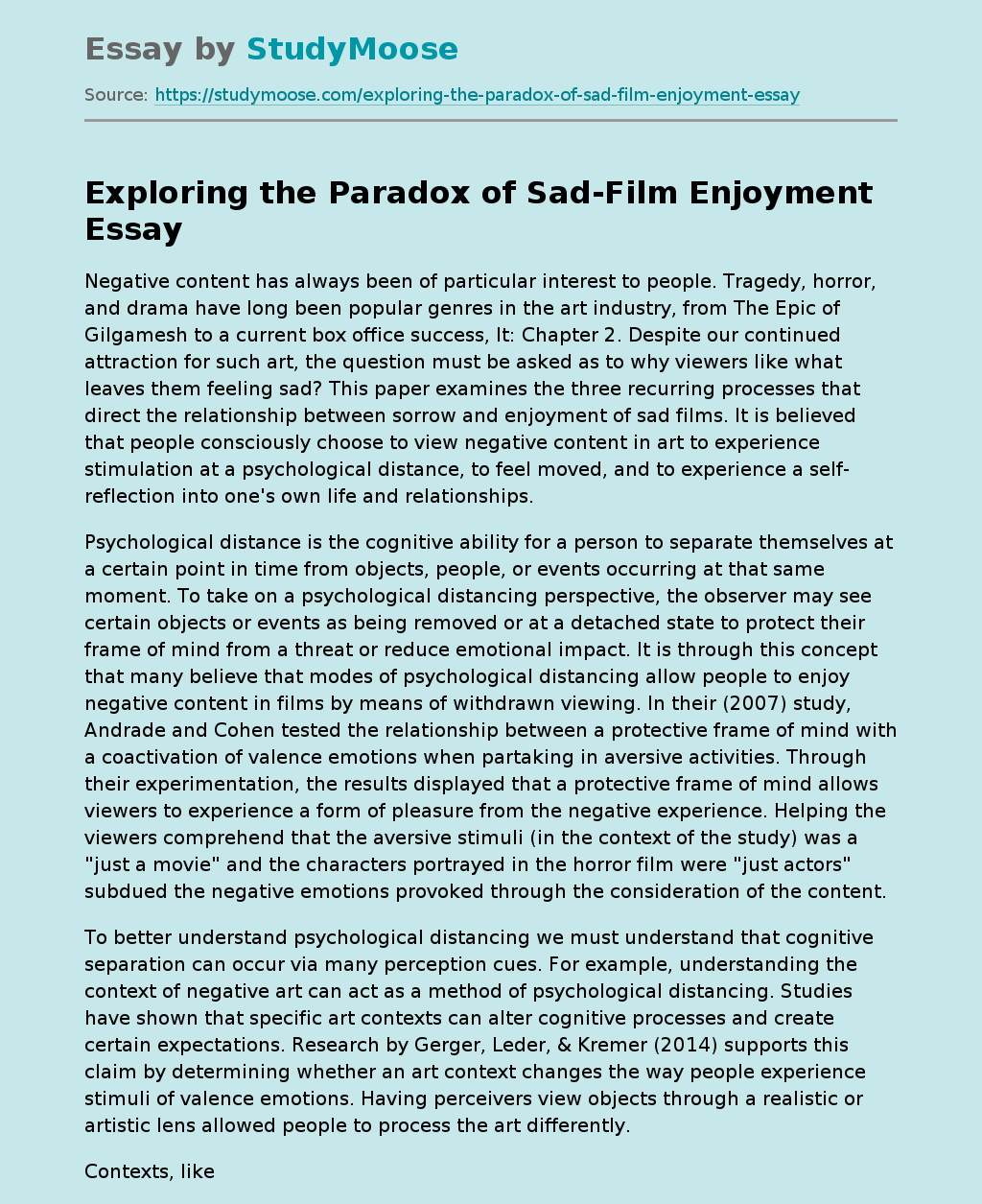