“Eve’s Diary” is a satirical account of the days in the Garden of Eden. Twain recounts the well-known tale of Genesis through a series of journal entries written by Adam and Eve; these personal accounts make for an entertaining and thought-provoking read. Twain’s personifications of gender stereotypes are easily identified but lead the reader into a further exploration of Twain’s deeper purpose. Twain’s writing style explicates the paradoxical relationship between men and women. Furthermore, Adam and Eve’s conflicting perspectives within the journal entries provide an illustration of their magnetic reliance on one another, despite their polar differences.

Don't use plagiarized sources. Get your custom essay on
“ “Eve’s Diary” by Mark Twain ”
Get custom paper
NEW! smart matching with writer

The story begins with Eve on the day after her creation; Twain creates a tone of despair as Eve ponders her situation and existence. “That is what I AM-an experiment; just an experiment, and nothing more” (Twain 10). As Eve deducts that there must be a counterpart to her existence, her disposition abruptly changes from anguish to optimism. Through this character development, Twain portrays companionship as Eve’s salvation and furthermore, mocks the modern idea of the contingency of a woman’s survival on that of a man’s.

Eve’s perception changes as abruptly as her disposition. Once her mind is at ease, she becomes conscious and appreciative of her surroundings. “This majestic new world is indeed a most noble and beautiful work. And certainly marvelously near to being perfect, notwithstanding the shortness of the time” (Twain 14). Twain uses Eve’s passionate and enthusiastic mentality as a personification of the model of femininity according to nineteenth century stereotypes.

The diction and timing of Adam’s introduction exaggerates Eve’s naivety and sets a precedent for Twain’s exploration of their paradoxical relationship. Eve’s entry reads, “All the week I tagged around after him and tried to get acquainted. I had to do the talking, because he was shy, but I didn’t mind it. He seemed pleased to have me around, and I used the sociable ‘we’ a good deal, because it seemed to flatter him to be included” (Twain 35). Though it is told from Eve’s perspective, Twain wants the reader to negate Eve’s idealization when reading of her interactions with Adam. When one does so, Adam’s annoyance with Eve is apparent.

In addition, Twain makes a considerable effort to portray Adam as haughty, cynical, and drastically unattached in comparison to Eve; Twain uses Adam as a personification of stereotypical conception of masculinity. “During the last day or two I have taken all the work of naming things off his hands, and this has been a great relief to him, for he has no gift in that line, and is evidently very grateful” (Twain 178). If interpreted in the manner Twain intended, it is clear that Adam has no concern with naming the creatures and is equally indifferent towards Eve.

Twain develops these satirical personifications even further to serve two slightly less superficial purposes. Twain uses these conceptions to delve into the profound relationship between men and women but also to denounce them through his diction. Twain’s defiance begins with his decision to give Eve, a woman, the predominant voice in the narrative. He shows further disregard for popular opinion when he tells of the creation of fire. “I had created something that didn’t exist before; I had added a new thing to the world’s uncountable properties;

I realized this, and was proud of my achievement, and was going to run and find him and tell him about it, thinking to raise myself in his esteem-but I reflected, and did not do it. No-he would not care for it” (Twain 67). Twain’s decision to credit such a pivotal aspect of human survival to a woman exhibits either an immense reverence for women or a severe distain for unoriginal thought. Regardless, Twain’s upheaval of the hierarchy of traditional Western gender roles transcends time and leaves the reader to contemplate the validity of gender roles.

Ursula LeGuin, a published and renowned author of short stories herself, discusses the prevalence of personification of stereotypical gender roles within _Adam and Eve’s Diary_. LeGuin argues that Twain’s personifications of gender stereotypes are the most important aspect of any literally analysis of works by Mark Twain (LeGuin 32). Deviating slightly from the focus of LeGuin’s analysis, the most important purpose of “Eve’s Diary” to be the paradoxical relationship between men and women. As the journal progresses, so does the connection between Adam and Eve. Although their differences remain vast, Adam and Eve demonstrate a dynamic reliance on one another. They compliment one another in a sense of discord; their stereotypical personas seem to become less obtrusive as they grow together.

Through Eve, Adam is humbled and learns to be appreciative and observant of his surroundings. Adam has a similar effect on Eve; her interest in aesthetics diminishes and while she remains optimistic, she is not so dangerously naïve. The story digresses to forty years later, with Adam at Eve’s grave. Adam’s eulogy for his lifeless wife is ingeniously engineered to resonate with nearly every reader. He says, “Wheresoever she was, THERE was Eden” (Twain 129). Adam, and therefore the male gender collectively, possessed a magnetic dependence on Eve that was as involuntary as the polar differences between the two. Twain accomplished a feat that the laws of nature could not; through “Adam and Eve’s Diary,” Twain provides an unprecedented look into why men and women attract in circumstances that should naturally repel them from one another. 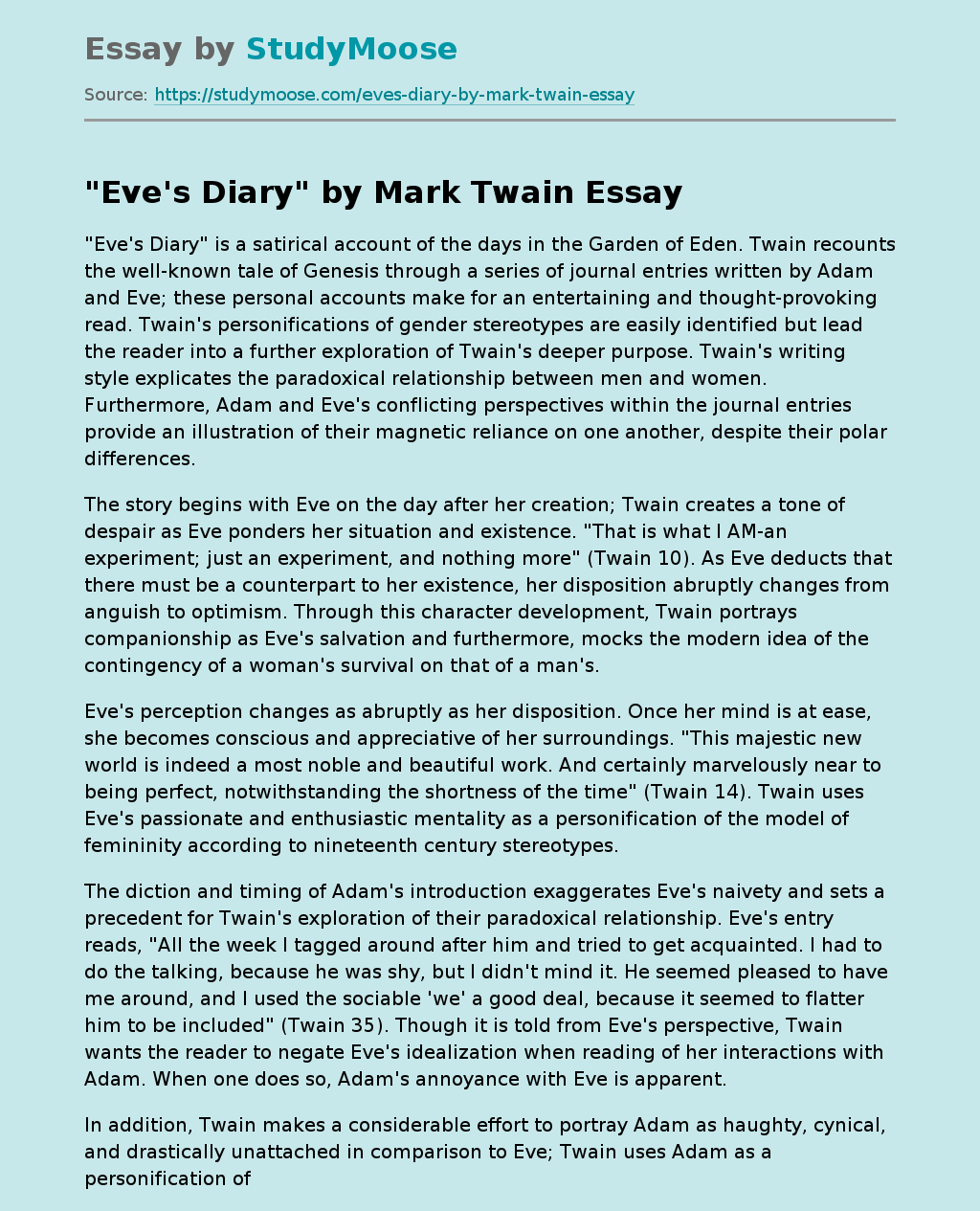