IT was the festival of spring. From the wintry shades of narrow lanes and alleys emerged a gaily clad humanity. Some walked, some rode on horses, others sat, being carried in bamboo and bullock carts. One little boy ran between his father’s legs, brimming over with life and laughter. 1. The Lost Child A child goes to a fair with his parents. He is happy and excited and wants the sweets and toys displayed there. But his parents don’t buy them for him.

Don't use plagiarized sources. Get your custom essay on
“ The Lost Child ”
Get custom paper
NEW! smart matching with writer

Why then does he refuse when someone else offers them to him? / Moments “Come, child, come,” called his parents, as he lagged behind, fascinated by the toys in the shops that lined the way. He hurried towards his parents, his feet obedient to their call, his eyes still lingering on the receding toys. As he came to where they had stopped to wait for him, he could not suppress the desire of his heart, even though he well knew the old, cold stare of refusal in their eyes.

“I want that toy,” he pleaded. His father looked at him red-eyed, in his familiar tyrant’s way.

His mother, melted by the free spirit of the day was tender and, giving him her finger to hold, said, “Look, child, what is before you! ” It was a flowering mustard-field, pale like melting gold as it swept across miles and miles of even land. A group of dragon-flies were bustling about on their gaudy purple wings, intercepting the flight of a lone black bee or butterfly in search of sweetness from the flowers.

The child followed them in the air with his gaze, till one of them would still its wings and rest, and he would try to catch it.

But it would go fluttering, flapping, up into the air, when he had almost caught it in his hands. Then his mother gave a cautionary call: “Come, child, come, come on to the footpath. ” He ran towards his parents gaily and walked abreast of them for a while, being, however, soon left behind, attracted by the little insects and worms along the footpath that were teeming out from their hiding places to enjoy the sunshine. “Come, child, come! ” his parents called from the shade of a grove where they had seated themselves on the edge of a well.

He ran towards them. A shower of young flowers fell upon the child as he entered the grove, and, forgetting his parents, he began to gather the raining petals in his hands. But lo! he heard the cooing of doves and ran towards his parents, shouting, “The dove! The dove! ” The raining petals dropped from his forgotten hands. “Come, child, come! ” they called to the child, who had now gone running in wild capers round the banyan tree, and gathering him up they took the narrow, winding footpath which led to the 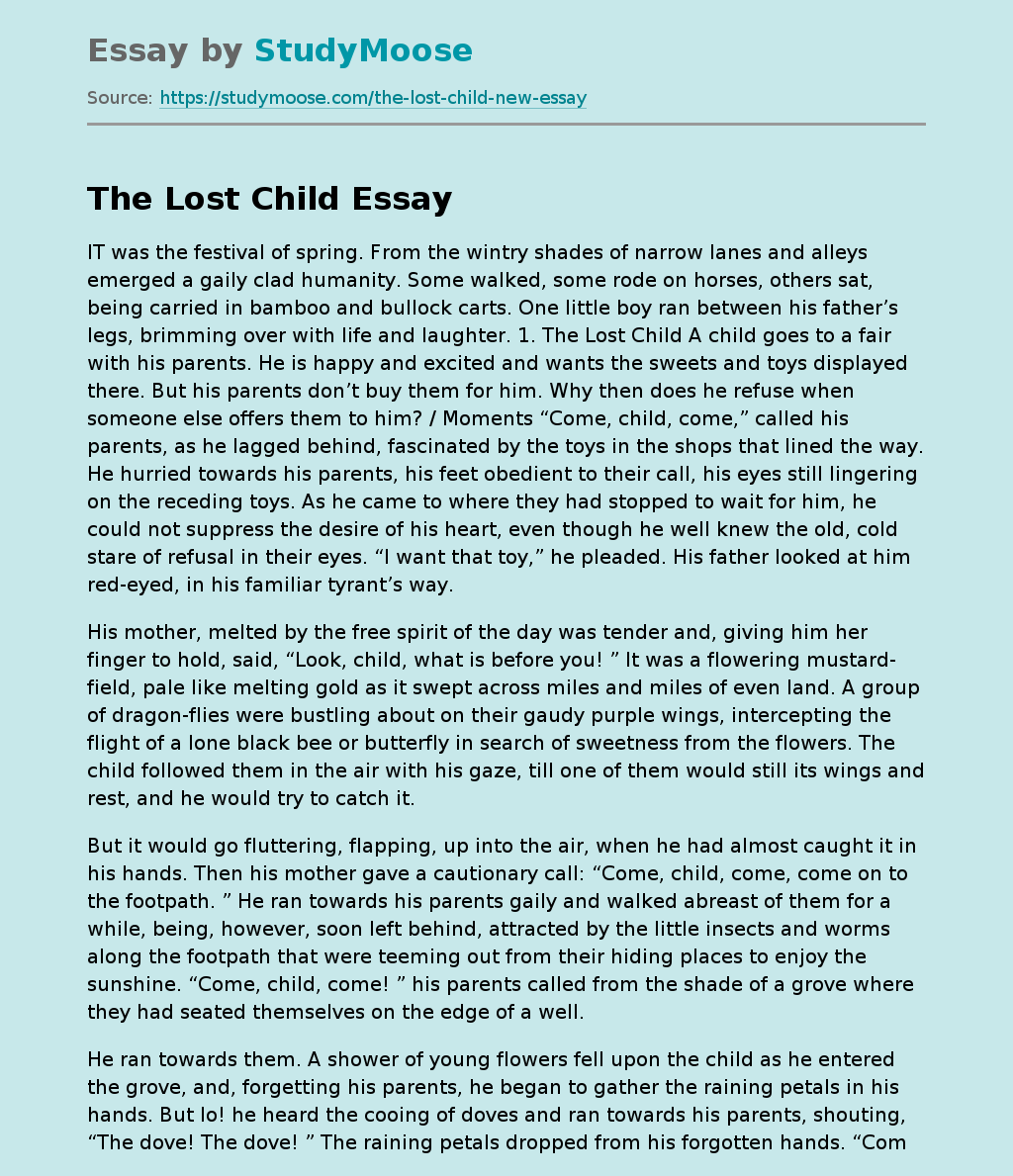