“’Identity has been increasingly used to refer to the social and historical make-up of a person, personality as a construct. Sometimes such identities are conceived narrowly psychological, individualist terms, as the cumulative result of personal experience and family history” This is seen particularly in Beowulf where all men are referred to as their fathers’ sons’. Family history was massively important in those times and men well often well respected because of the heroic things their ancestors had done. Warriors also felt the need to reach the same level of notoriety.

Don't use plagiarized sources. Get your custom essay on
“ Explore the Construction of Identiy in Hamlet and Beowulf ”
Get custom paper
NEW! smart matching with writer

This is shown when we are first introduced to Beowulf. We are told about his father before even knowing his name: “In his day, my father was a famous man a noble warrior-lord named Ecgtheow” Similarly in Shakespeare’s Hamlet, purely through learning of Hamlet’s lineage we discover he is the son of the king and this plays an important part of his identity and the events throughout the play.

In most novels, plays and poems, the identity of the protagonist changes the more we get to know the character; the more that happens the more we think we know what they are like. This is the same for real life, when we first meet people we are often uncertain about their identity and personality, we usually learn more about them through their actions and associations. This is true for Beowulf; because it is set in the third person we learn about him through what he does and what he says.

A text being in third person can also be useful; the narrator can offer definite and universal truths about the character which can be especially useful as it is almost impossible for a writer to create a character that will be interpreted the same way by every person that reads it.

Characters are read in different ways throughout the generations and from culture to culture. It could therefore be argued that identity is not created through the author but by the readers. Hamlet, being a play, has many long soliloquies where he reveals his inner thoughts to the audience in first person. In soliloquies the character usually asks a rhetorical question and then answers it; this allows the audience to understand the character’s emotions and motives, something especially important in Hamlet where some of his actions would be considered very unconventional or deranged. This helps us to empathise with Hamlet and engage ourselves in the plot. “O that this too too solid flesh would melt,

Thaw, and resolve itself into a dew!
Or that the Everlasting had not fix’d
His canon ’gainst self-slaughter! O God! O God!
How weary, stale, flat, and unprofitable”

This is the beginning of Hamlet’s first soliloquy when he learns of his father’s death and his mother’s betrayal by marrying Claudius less than two months after his father’s death. He contemplates suicide to escape what he describes as a ‘weary stale, flat and unprofitable’ world and wishes it was not a sin against God. Not only does this soliloquy reveal his true feelings about his mother and Claudius, it shows us that he is religious which accounts for his delay in murdering the new King even under his dead father’s orders.

The thoughts of other characters, not only the protagonist are important as they help to keep the play timeless. In Hamlet, murder is nothing abnormal, almost expected whereas now it is a very serious offence for anyone, including the monarchy. Not only that, but seeing a ghost is not normal behaviour for a 21st century reader, without the other characters seeing the ghost we would be unable to distinguish between reality and Hamlet’s madness. Horatio talks to the ghost like it is a real thing: “Horatio: Stay, speak, speak, I charge thee speak.”

It can be concluded that identity is how the characters act within the times in which they live in. Identity is therefore impossible to create without the concept of time and the context that the text was written in. Texts are sometimes altered to appeal more to certain audiences from different times and locations such as: “Hormone Imbalance’s Ophelia (1979), in which Ophelia is a lesbian and runs off with a woman servant to join a guerrilla commune; Curtis’s obscenely funny The skinhead Hamlet (1982) and Jean Bett’s Ophelia thinks harder (1993), in which the heroine acts assertively while the hero dithers.” This goes against the thesis that states identity is created by experience and implies that identity is subject to time, location and the audience it is written for. It could also be argued that each of these different variations of Hamlet have created a completely different identity in each text.

Someone’s identity is not fixed; it changes over time as the character develops and often through self discovery or even (In the case of Hamlet) an identity crisis due to conflicted values and internal and external pressures. The shift in opinions and ideas of the character constructs a more complicated identity that is more difficult to label. Throughout the whole text, Beowulf has the same ambitions and desires; to be a legendary warrior. Hamlet on the other hand discovers his morality and desires as he goes a long.

This makes Hamlet’s identity much less solid and more complex. He is not a normal character in the sense that he goes against social norms; his unorthodox approach to life and the truth means he is isolated and becomes a threat to those around him, specifically the new King. In the beginning of the play, Hamlet seems to have lost his identity; he has lost his father (like Beowulf lineage was of great importance, especially being part of the monarchy), his status as heir to the throne is in jeopardy as Fortinbras plans to attack and his uncle is now his step father.

Beowulf establishes his identity as a warrior and a hero by recounting his successful endeavours:

“They had seen me bolstered in the blood of enemies when I battled and bound five beasts, raided a troll-nest and in the night sea slaughtered sea-brutes. I have suffered extremes and avenged the Geats (their enemies brought it upon themselves, I devastated them).” Beowulf is a warrior more by reputation than what he actually does throughout the duration of the text. Although he defeats Grendel fairly quickly after being introduced to us, and after that Grendel’s mother, fifty years pass without much detail of Beowulf’s triumphs.

The form of both texts has an impact on the identity of both Beowulf and Hamlet as individuals but also society as a whole in the two texts. Beowulf is an epic poem which are traditionally used to recount heroic acts and important events in history. This gives the text an authentic feel as well as reflecting the culture of the times in which Beowulf lived in; most stories were shared by word of mouth, often by song or poetry and not often documented. Men craved the notoriety and were willing to die in battle do achieve it.

The unusualness of an epic poem also reflects complete difference of the world we live in where we not only have no warrior culture, people generally don’t die for fame and monsters don’t exist. Hamlet being a play is much more than just the text and was written to be performed instead of just read. Hamlet’s – and every other character’s – identity is created not only through his choices and the things he says but how he says them and facial expressions/movement.

For example Hamlet’s ‘madness’ can be seen much easier through exaggerated actions than it can be through stage directions or obvious comments from other actors. Personality traits such as thoughtfulness, arrogance, insecurity and Claudius’ guilt can also be seen more clearly when performed on stage. Another complication of Hamlet being on stage is that every actor will play the part differently. Not only will age and clothing affect perceptions of identity, the way in which scenes are acted out will also change the character.

One way of creating a complex identity is through giving the character a fatal flaw. This is most prominent in Hamlet; his fatal flaw is his indecisiveness to act on his father’s orders. Every event in the play leading to Hamlet’s death and including every other death except that of his father’s was down to his inability to make a decision to kill Claudius and act on it. Not only does his hesitation to kill Claudius in prayer expose his fatal flaw but if he had gone ahead with the act then he could have been seen as evil and his identity would have changed dramatically, this adds to the argument that it is the plot and events in the text that construct the character’s identity.

Language also has an effect on emphasising certain aspects of a characters identity. For example the clown – clown is not necessarily the same as a clown in the 21st century, in Shakespearean times a clown was not a very important member of society – in Hamlet creates a contrast and almost acts to remind us of Hamlet’s social status and power. The clown also adds an element of humour to the scene which breaks up the tension and acts to emphasise Hamlet’s melancholic nature. “HAMLET: Here’s another. Why may not that be the skull of a lawyer? Where be his quiddities now, his quillets, his cases, his tenures, and his tricks?

Why does he suffer this mad knave now to knock him about the sconce with a dirty shovel, and will not tell him of his action of battery? Hum! This fellow might be in’s time a great buyer of land, with his statutes, his recognizances, his fines, his double vouchers, his recoveries. Is this the fine of his fines, and the recovery of his recoveries, to have his fine pate full of fine dirt? Will his vouchers vouch him no more of his purchases, and double ones too, than the length and breadth of a pair of indentures?

The very conveyances of his lands will scarcely lie in this box, and must th’inheritor himself have no more, ha?” Contrasting language by using words together in this soliloquy such as ‘shovel’ and ‘dirt’ with ‘recognizances’ and ‘conveyances’ demonstate his conflicting identity. The ‘Ha?’ at the end also acts as a rhetorical question which marks a change on his views of wealth, power and death.

In conclusion, although identity of a character has many contributing factors, the protagonists in both texts would have no identity at all without experiences that shaped their personality and traits throughout the text. Although language and form have an effect on identity, it is the plot that has the most impact on the character.

Explore the Construction of Identiy in Hamlet and Beowulf. (2016, Sep 28). Retrieved from https://studymoose.com/explore-the-construction-of-identiy-in-hamlet-and-beowulf-essay 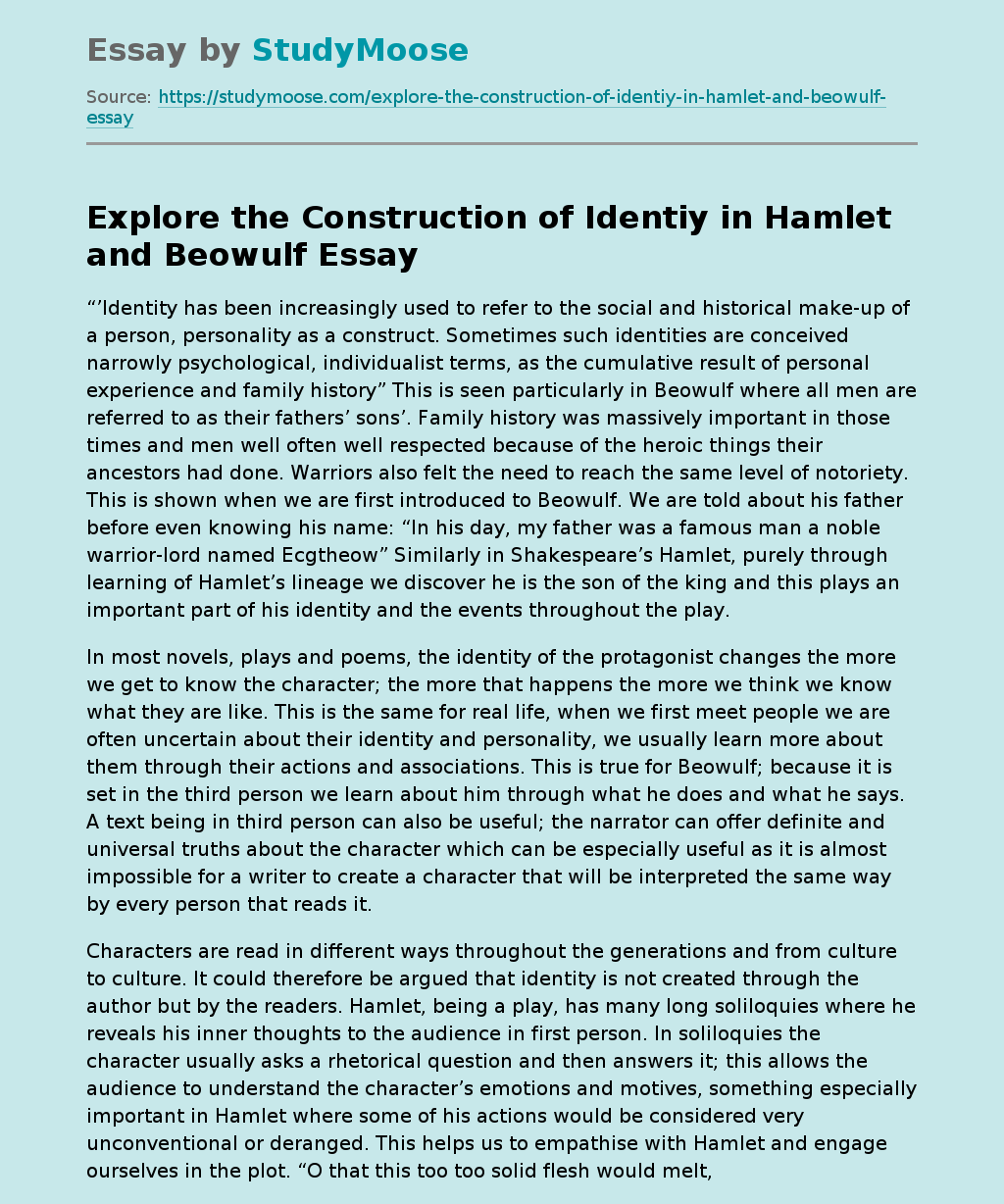