Equality, Diversity and Rights in Health and Social Care on Practice

Our study case, Jamilla has been treated differently from other people for example at school by not being provided any support. She was discriminated at workplaces, she felt that employers were hostile and difficult to work with. Also she was ignored by the local housing authority when she complained she was told ‘be grateful, it’s better than what you came with’. Because of the diversity Jamilla ends up being unemployed, living on benefits without any basic qualifications (GCSE’s) in damp, run down council flat.

Don't use plagiarized sources. Get your custom essay on
“ Equality, Diversity and Rights in Health and Social Care on Practice ”
Get custom paper
NEW! smart matching with writer

Jamilla may have been treated unequally because of her nationality, which is Nigerian. Also it might be because of her accent and the lack of communication skills in English. On another hand all that discrimination may have accrued because of our intolerant culture and because it may have been a new, different which comes with it scary situation for those nasty people.

Because of the lack of help from school Jamilla failed her GCSE’s but if they would provide any help, such as extra English lessons for foreign people or dictionaries it would help her get on with GCSE’s easier and it could have a big, positive impact on her future.

Also the employers which she was working for made a negative effect on her future. They were hostile and difficult to work with so this might be why Jamilla prefers to stay on benefits rather than gain more money by working. Read how can diversity benefit society

To explain the benefits of diversity for society I have came up with few examples to explain why it is so important and good for us to respect diversity.

* Trying out new food, finding out about others countries and cultures is a big benefit for all of us but only people who value diversity in others will benefit from it.

* It is also important to accept diversity because it’s simply unfair and can be illegal to treat minority groups in discriminatory way.

* We have not enough appropriately qualified people to fill some jobs this is very evident in the healthcare sector were staff from Africa, India and Eastern Europe have been employed to overcome this problem. Also the low paid jobs for example industrial in factory with minimum wage where locals doesn’t want to work, people from aboard are fulfilling those places is well. Some of them would not be able to get any better job because for example the language barrier or low qualifications.

* Foreign Direct Investment for example someone from aboard investing in UK through for instance setting up a business and if it does well it will increase the UK’s GDP (Gross Domestic Product) which is the measurement of an economics performance.

Six weaknesses in the way the Elms Residential Home cares for its service users:

1. No frequent check ups on residents

2. No talking or interacting with residents by the nursing staff

3. Lack of activities planned for residents

4. No religious observances are recognised

5. Set times for going to bed

The Elms Residential Care Home has failed to integrate some rules of Care Value Base (CVB) into its daily practice. There are seven CVB principles, which are set to promote anti-discriminatory practice. In my opinion the Elms Residential Care Home has failed on two of them rules. ‘Acknowledging people’s personal beliefs and identities’, study case care home does not recognize any religious observances which is against some of the patients will. Also there is another rule which The Elms Residential Care Home ignore which is ‘Providing effective communication and relationships’. Care staff never talks or interact with residents which can make the residents very lonely and it will definitely not do much good for them.

You may also be interested in: GCSE English Coursework Treasure Island

Elms Residential Home could improve their day-to-day practices for example by making an arrangement that every one or two hours each resident will be check up on. Talking and interacting with residents by the staff will defiantly make residents feel happier and also the staff will enjoy the work much more, so it will benefit both sides. More activities should be planned, indoor as well as outdoor so that the residents will have more to choose from.

Also it will make them feel more independent of how do they want to spend heirs days. Religious observances would gain more residents into Elms Residential Home and it would make everyone feel more comfortable and it would make theirs life’s easier, instead of going away for religious traditions they could stay at home and do everything there and it would be safer for them because there would be no risk of them getting hurt on the way there or way back. Everyone has different daily routine, every one likes to do different things at different times so setting a specific time for residents to go to bed is very unrespectful. To make the residents feel more comfortable, staff should give them some freedom to do whatever they like, make them feel like they would be at theirs own houses. Residents privacy must improve because it a massive factor which could make the residents feel bad. Staff needs to take in count theirs dignity and respect them.

By promoting equality, diversity and rights in a care home such as Elms would make patients feel independent and safe because they will trust others that they will respect them, theirs dignity, confidentiality and that they are equal even though the might be very old, different colour skin or having different accent.

The potential effects of discriminatory practice

1. Disable people could get offended by this statement because they might feel left out and that they are not equal.

2. People that are not relevant to the job can get offended by this statement because they might feel useless and it would decrease their self esteem.

3. People that do not speak this language could get offended because they can’t participate with others and it would make them feel left out, lonely.

4. People over who’s the power want to be taken because those people might feel that they are not as good as they who have a power.

Equality, Diversity and Rights in Health and Social Care on Practice. (2020, Jun 02). Retrieved from https://studymoose.com/equality-diversity-and-rights-in-health-and-social-care-on-practice-essay 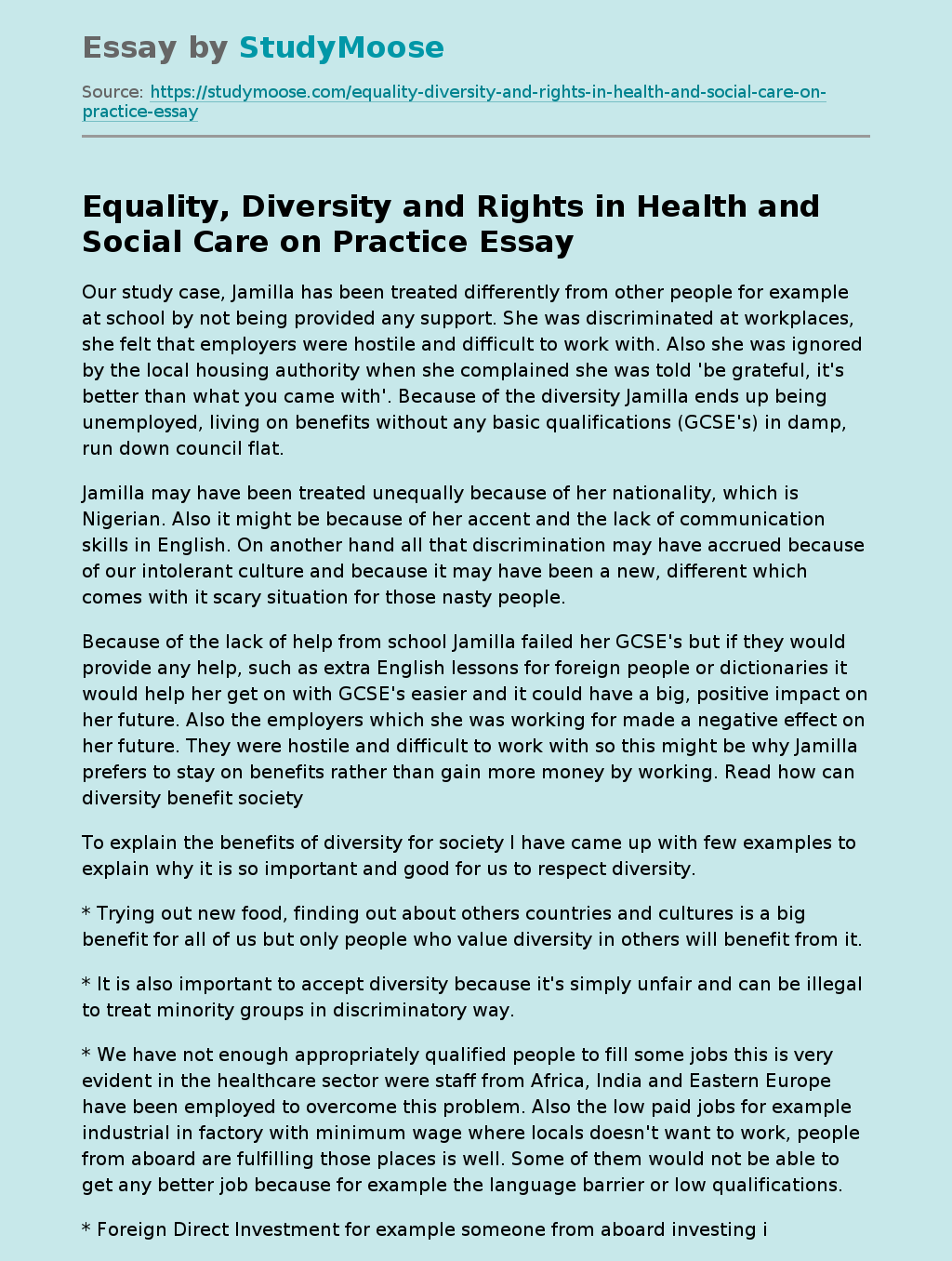