The term environment comes from the French word “environment” and means everything around us. ”. The meaning of the French word is somewhat related to “encompass” “encircle” etc(It is believed to have been introduced into the subject by biologist Jacob Van Erkul in the early 1900s). It can be living or non-living things, that constantly interact with each other and adopt themselves to conditions in their environment. In the environment, there are different interactions between animals, plants, insects, soil, water, and other living and non-living things.

Don't use plagiarized sources. Get your custom essay on
“ Environmental Science: Definition, Scope and Importance ”
Get custom paper
NEW! smart matching with writer

Living elements that an organism interacts with are known as Biotic elements: animal, plants, etc., Abiotic elements are non-living which include air, water, sunlight, etc.

The environment can also be defined as the whole physical and biological system surrounding the man and other organisms along with various factors influencing them; biotic and abiotic factors. Man is thus an inseparable part of the environment. Man and the environment have very close relationships with each other. The social life of man is affected by the environment. This is the reason for various types of social and cultural activities around the world. The hilly people have different lifestyles than people in plain areas. Similarly, people around the world differ in their food, cloth, and festivals, etc. The environment has three important constitutions, these are:

The earth atmosphere, a complex fluid system of gases and suspended particles, did not have its origin in the beginning of the planet, the atmosphere as of today has been derived from the earth itself by chemical and biochemical reactions. The fluid system forms a gaseous envelope around the earth, its boundaries are not easily defined. They can be arbitrarily defined as earth atmosphere interface and space interface. The gases like nitrogen, oxygen, argon, carbon dioxide, and water vapor, etc together make up the volume of the atmosphere, and suspended particulates, dust, soot constitute the gaseous turbidity.
Atmosphere further constitutes the four segments

It includes surface water and its surrounding interface. Water possesses a number of physical and chemical properties that help the molecule to act as the best-suited medium for life activities. The movement of water from the earth’s surface to the atmosphere is maintained by the hydrological cycle. Hydrosphere constitutes all types of water resources. So 97% of the earth’s water supply is in oceans,2% of water is locked on polar ice caps and glaciers, only 1% is fit for human usage.

The social constituents of the environment mainly consist of various groups of populations of different living organisms like birds, animals etc. Man is most intelligent living organism, like other living creatures man builds house, prepares food and release waste materials to the environment. Man is a social animal, he makes laws, policies for the proper functioning of society.

The three components of the environment give rise to four important zones, these are Atmosphere, Hydrosphere, Lithosphere and Biosphere. There is a continuous interaction among these four zones. The biosphere indicates the realm of living organisms and their interactions with the environment, viz atmosphere, hydrosphere, and lithosphere.

Students and academics who work in the field of environmental science oftentimes focus on a specific area of study within this field, like studying the ecological changes of the environment, examining water quality throughout the world, investigating the kinds of toxins released into the environment as well as the chemistry of how the world changes in response to human technological development and urbanization. Environmental science can even dive into a zoological framework, looking at how the populations of living things are affected by changes in the environment.

The short scope of environmental studies is broad-based and it encompasses a large number of areas and aspects, broadly listed below: 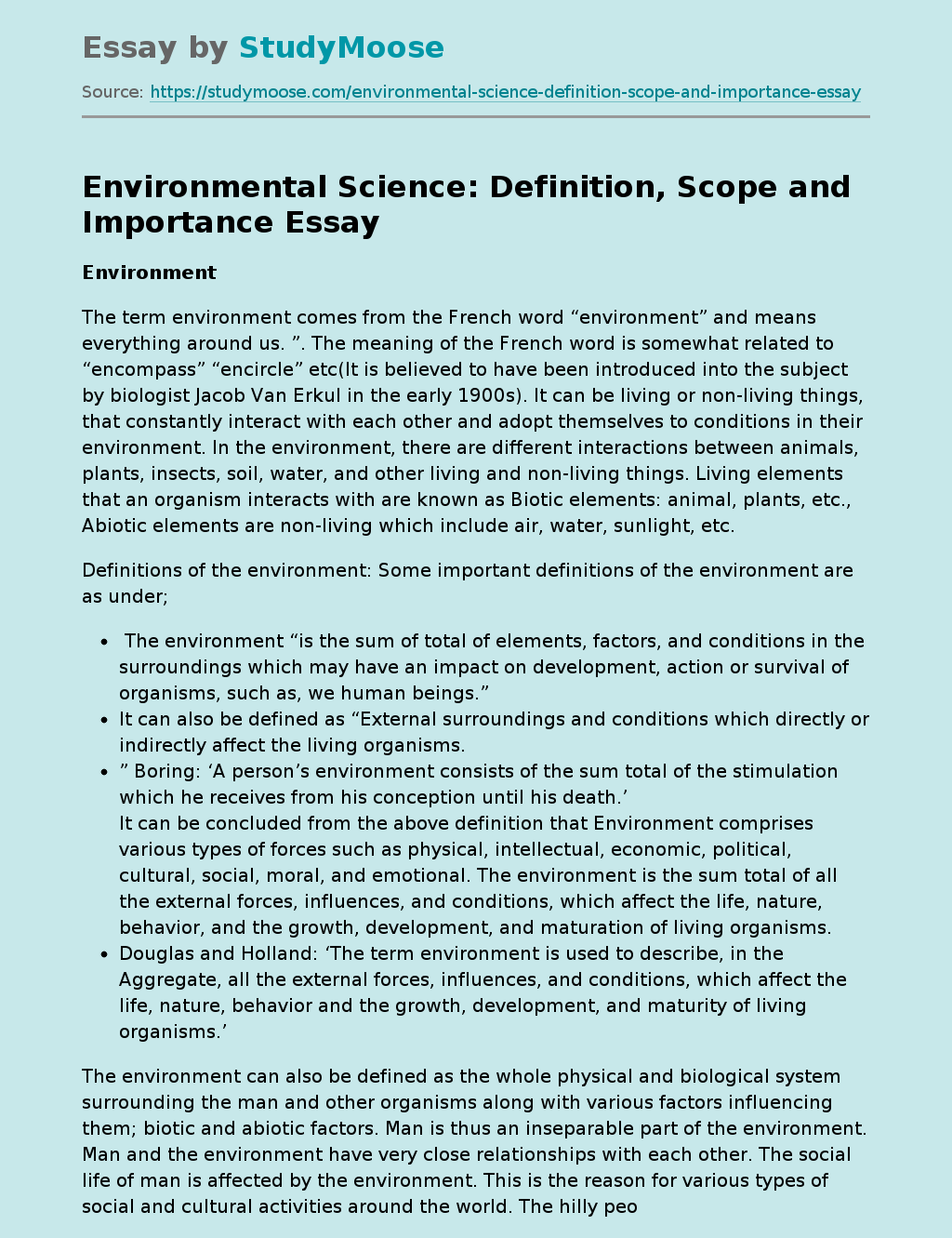