Effects of Overpopulation in China

This literature review discusses the impacts of overpopulation on the environment in China through four main studies. Each study directed its research on one consequence: the water issue and the aquatic ecosystem, the overexploitation of land and resources as well as the extinction of green land, climate change, GHG emission and desertification of land1. Several methods and sources were used such as Pressure–State–Response (PSR), urban-rural population model or other research papers written previously2. The results of these studies clearly show that the overpopulation has multiple negative impacts on the Chinese environment and that strategies and policies regarding these issues should be established.

Don't use plagiarized sources. Get your custom essay on
“ Effects of Overpopulation in China ”
Get custom paper
NEW! smart matching with writer

The population of China is growing exponentially and it is a serious issue because of its impact on the environment. The water deficiency is growing and as it is presented, the expectations of the Chinese people exceed the capacity of the land3. Since the population of China is increasing fast, the urbanization of land and the agricultural development increase at the same rhythm4.

As it is presented, human activity and human density are the main explanation for climate change5. According to Shijie Wang’s study, the southwest of China is experiencing a desertification, in other words the land becomes like a desert left with no resources6. Each article presents a different way of conducting its research to prove its point. In Qian Hong et al. research, the methods used to pursue the study are Pressure–State–Response (PSR), the landscape ecology method and Remote Sensing – Global Positioning System (RS-GPS) 7.

According to the authors, there are three types of indicators: Pressure indicators, State indicators and Response indicators7.

The indicators either presented a high or a low number. If the number is high, it means that the region suffered from important water degradation; if the number is low, it means the opposite7. The analysis of the research is made through a process called Analytical hierarchy process (AHP) that has four specific indicators7. Jianfa Shen’s study uses urban-rural population model to do predictions about the density of the population and is also represented as spatial demographic-economic model 8, whereas Shijie Wang conducted its research by investigating the studied region and by using indicators such as aerial photos and satellite images. He then compares and analyses the results with previous images and researches from the land

9. The only piece of work that did not use any kind of Research method was written by Hung Ming-Te et al. who preferred to write the paper in reference to researches and studies made and scientific predictions 10. One of the most important consequences of overpopulation is the expanding deficiency in water resources. Investigators processed in six districts of China which are part of one region (Jinan) that was recognized for its important source of water, aquatic ecosystem and surface. Due to industrial development and human actions the water condition became polluted and rarer

11. Researchers found that water deficiency and erosion, rainy climate, poor land vegetation, climate change, loss and decrease of agricultural production, which all lead to desertification of land, are all consequences of the activities of the overpopulation 12. Ming-Te et al.’s study presented that the GHG level increased rapidly and the national security is at risk. GHG growing production would also make the lack of water and air pollution worse than it actually is; also they stated that climate change, in addition to being caused by overpopulation, is influenced by poor sustainable development, poor resources management and over-use of energy.

This study shows that such changes have impact such as poor water resource and low agricultural production. These consequences engender other concerns such as the lack of food, the decrease in water resources and the desertification of land 13. The conclusions are clear regarding this area, the exceeding use of natural resources is a threat for the environment’s protection and conservation 14. Hong et al. are from the same opinion when they wrote that water condition is getting worse and it affects China’s population’s lifestyle as well as the aquatic ecosystem 15.

In the field of environment, every single factor is closely related to another one. Each of the four studies shows how the desertification of land, the migration, the exceeding use of resources and the poverty of population are linked. In Wang et al.’s research, poverty is shown to be one of the most devastating causes of desertification because farmers, in order to survive and feed their families, have to increase the production of grains. The overexploitation of the land then leads the land to become rocky 16. According to Shen’s study, agriculture is over-used and China has to import grains to meet the population’s needs

17. The deterioration of the environment and the growth of the land desertification are strongly correlated with the increasing population of this region as well as their activities 18. In reference to Wang et al., Shen and Ming-Te et al.’s studies, since the land is experiencing a phenomenon of desertification because of the exceeding use of agriculture and the high density of population in rural zones, populations are migrating to cities that have already exceeded their capacity in supporting people19. Basically, what Shen is trying to explain is that the construction of urban areas and the overexploitation of lands lead to a decreasing number of green land which causes the environment to deteriorate, because the more people there is, the more resources needed 20. The biggest problem China is facing is the lack of policing and measures adopted regarding the protection of the environment. According to Ming-Te et al.,

Studies show that the impacts of overpopulation are multiple and they do affect the ecosystem in China. Shijie Wang et al.’s study proved that the land is overloaded with population growth and has met its capacity. This forced farmers to deforest the land of the Liupanshui district in order for them to increase agricultural production. Also, even though the environment is favorable in this region for such phenomenon to happen, restricted natural resources, overpopulation activities, rapid population growth and social instability make the process happen faster. The consequence of overpopulation’s production of sulfur dioxide in the atmosphere exceeds the national average for smelting sulfur by over 13.8 times in some regions such as Bijie and Zunyi which causes air pollution and desertification of land 23.

The results of the study conducted in the region of Jinan by Qian Hong et al. clearly showed that this region has the best water condition because of its good conservation of environment, poor population density and important vegetation 24. Hung Ming-Te et al. proved that overpopulation, causing in many ways the change in climate would increase the frequency and strength of natural weather disasters 25. Jianfa Shen suggested that the exceeding use of natural resources due to the increasing density of population is a threat for the environment’s protection and conservation and that people’s lifestyle influences the environment negatively 26.

Effects of Overpopulation in China. (2016, May 09). Retrieved from https://studymoose.com/effects-of-overpopulation-in-china-essay 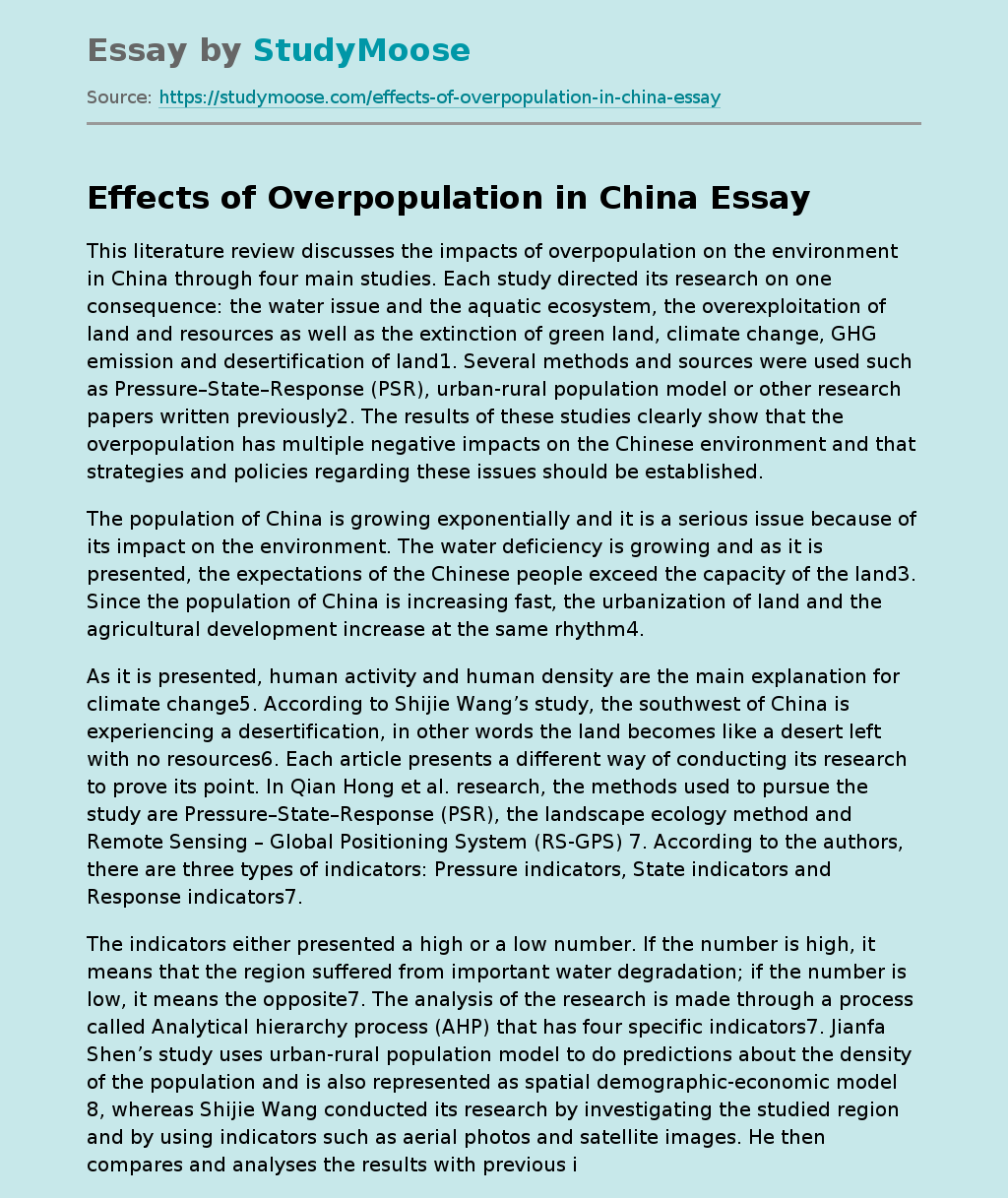