Don't use plagiarized sources. Get your custom essay on
“ Economic Concerns of British North America ”
Get custom paper
NEW! smart matching with writer

The vast economic concerns that caused British settlement of North America included the opportunity to discover gold and silver, to find a North American waterway that would lead directly to China and the Indies, and the hope of countering Spain’s dominance in North America. In addition to these economic reasons for colonization, the English were also seeking to obtain the essential “raw materials” in America that they had been previously buying from other European countries for ridiculous amounts of money and gold.

Many Englishmen wanted to go to America in search of gold in order to better their lives.

Due to these changes, many people thought that a new start would be a good idea. They figured that they didn’t have much to lose, so they might as well adventure to America with hopes of a better true. Great Britain also sought to solve other economic problems through American colonization.

For example, England needed to multiply and find more of its diminishing materials and resources, create another “market” to export its goods and merchandise, and maintain its powerful Ana through business with new American colonies. In addition, New England wanted to provide a new place for the unemployed in their country to settle, rather than escalating crime and the economic burden in its own cities. Many poor people in Great Britain were desperate and wanted to immigrate to America. They had hopes of starting a new life in the new world and becoming rich.

These people primarily did this by becoming indentured servants for a set number of years. This was mainly during the seventeenth century, in which indentured servants made up three-quarters to all the English immigrants going to the Chesapeake region. Most of the indentured servants were originally English farmers who had been pushed off their lands due to the expansion of livestock raising and overcrowding in the countryside. At first many could not make the trip to America because they didn’t have the money for passage.

However, eventually people gained more hope because American landowners were in need of laborers and were willing to pay for a laborer’s passage to America if they served them for several years. By selling passage for five to seven years worth of work, many poor people from England had the opportunity to go to America and eventually start a new life. Though there were religious concerns that contributed to the settling of British North America, the economic concerns outweighed the religious concerns greatly.

Some examples of religious reasons for the settling of America included the British wanting o have the Indians of North America converted to Protestant Christianity. In addition, specific groups that were looking for religious freedom used the British colonizing as a site to achieve this objective. Such groups included the Puritan separatists who had begun to lose their freedoms in England, and thus they became colonists in New England. The Puritans, however, were able to immigrate to America not only for religious reasons, but economic as well.

Many religious reasons for immigrating to America had an underlying reason that was economically related, the Puritans are a good example. They fled to America in order to escape religious persecution and restrictions, but they were granted “a charter from King James” for their settlement. Though these people may have immigrated to America for religious reasons, they were allowed to go for the primary purpose of generating profits for England. Had it not been for the British government allowing these people to go, British colonization may not have taken place.

Even if the religious settlers had not gone to America, there were other English people willing to make a fresh start in life as American colonists, and the colonies loud have still flourished under a population of settlers that were either looking to improve their lives in America or escape hardships they had in Europe. For example, the colony of Georgia was made up of “some of Loon’s criminals and the drunken idle poor. ” In this way, the British were able to find others besides the religiously abused to settle in the American colonies, while at the same time improving existing problems in England.

The goals of Great Britain’s government in settling North America were completely about the gain, profit, and benefit for England. This continued not Just through the immigration stages, but also through the setting up and establishment of communities and colonies. Economic concerns dominated colonial life during and up until the very end of the British colonial era in North America, up until the revolutionary war. Great Britain believed in governing its colonies based on the mercantile system, which was an economic system used to increase a nation’s wealth by government regulation of all of the nation’s commercial interests.

They held the position that money, particularly gold and silver, is the focal point from which a nation derives its rower, and “as applied to colonies, this meant that they existed only in order to enrich the mother country. ” In this way, England’s economic concerns with the colonies, which were to get as much wealth from their relationship with colonies as they possibly could, were the principal reasons for the colonization of British North America. This policy of mercantilism was evident throughout the era of the British colonization of North America and the relationship that the colonies had with Great Britain.

For example, England passed the Navigation Act of 1651. This Navigation Act stated “that al trade between France and English colonies, Europe and English colonies, and the colonies with themselves must be conducted on an English ship,” in order to improve England’s economy and develop England’s merchant marine. The Navigation Act of 1660 established new restrictions, which included that tobacco, cotton, wool, and indigo grown in the colonies could only be shipped to Great Britain. In this way, England prospered because it “helped the central economy and government of the British by excluding such raw materials from trade to other countries. Great Britain again continued its policy of mercantilism with The Staple Act of 1663, which “stated that all European goods bound for the American colonies must first land at English port and then be reshipped to America in English vessels”. Thus, England would profit by imposing custom duties on goods, and that cost would then be passed on to the American consumer. Great Britain then passed the Revenue Act of 1673, which “stated that all goods not bonded in England must have a duty and bond placed on them when the ship reached the colonies. This Act helped the British direct all trade through their ports and then collect proceeds from taxes and other charges. In addition, the English merchants would profit from having nomination on sales and increased prices in the colonies. Great Britain continued passing acts that made it more blatantly obvious that their economic concerns dominated all interest in the American colonies. The Sugar Act of 1764 was passed “to extract American money” through the taxing of sugar, coffee, and wines.

The Stamp Act of 1765 taxed colonists for many normal items that the American colonists used, without requiring that such taxes be on only imported goods. The Townsend Acts of 1767 taxed colonists on a great many of the goods that they imported. Through all of these acts passed by Great Britain to tax the American Illinois without giving them any representation in English government, it becomes apparent that the British sought only to prosper by any economic means possible, whether they were through trade, taxes, or other related strategies.

Overall, it is clear that Great Britain was colonizing North America for personal gain. They wanted the riches and resources found in the land, money from taxing the colonists, crops Dunn in the colonies, and to better the citizens in Great Britain by having many people immigrate to America, thus making the cities and towns of England less crowded and less full of poor, unemployed people. Economic concerns were the reason that the British colonized North America. 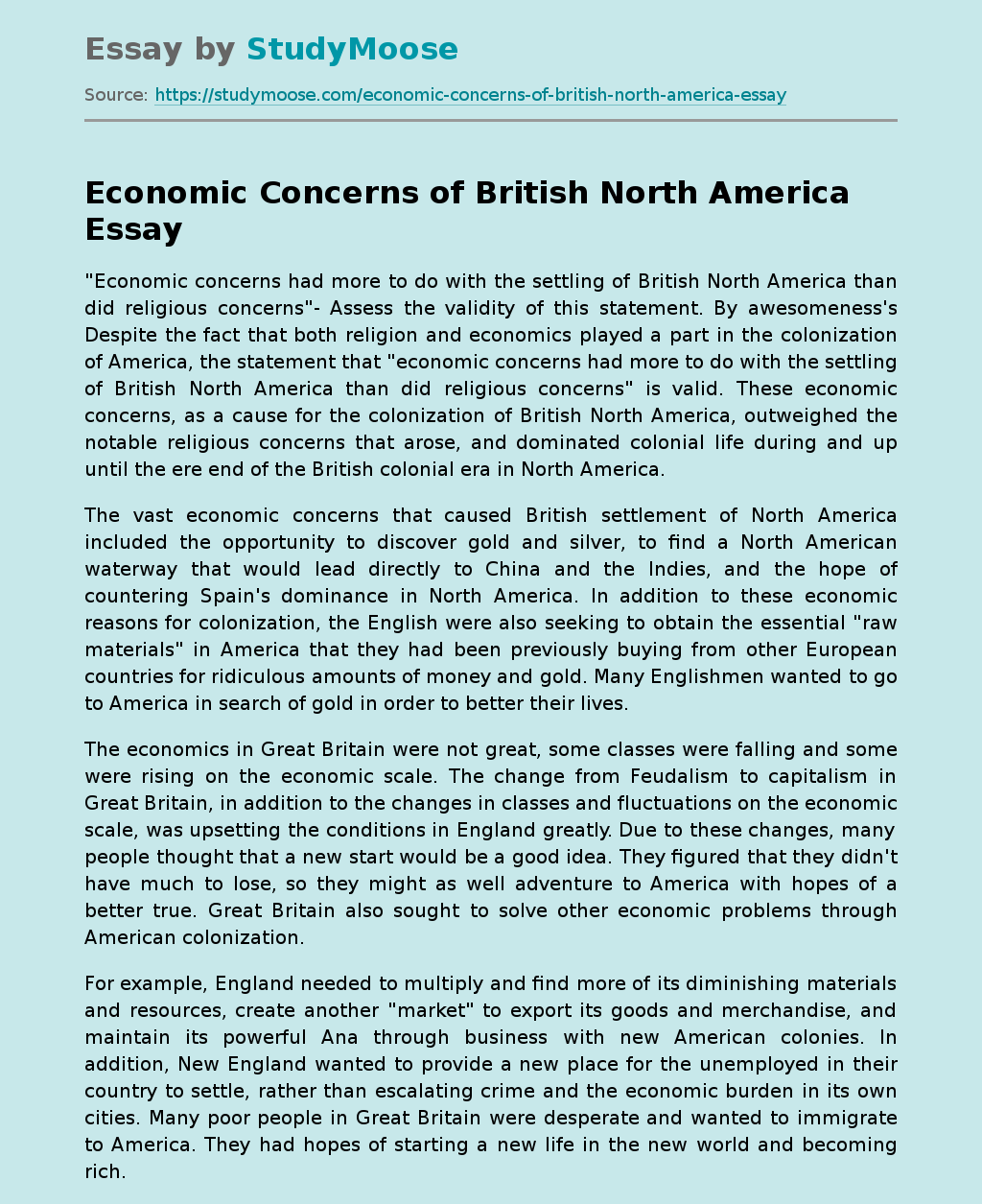