Pakistan’s Senate on Wednesday was informed that national literacy rate is 54 percent out of which 66. 25 percent male and 41. 75 percent female are literate. This was stated by Minister for Education, Mrs. Zubaida Jalal in her written reply to a query raised by Senator Sardar Latif Khosa in the Senate here. Giving the province-wise and gender-wise detail, the Minister informed that an estimated 60. 8% population is literate in Punjab province. The literacy rate for male and female are 70% and 51% respectively, she added.

The definition varies from country to country, therefore, it is difficult to rank Pakistan on the scale of literacy position in the world.

She, however, said literacy rate in the world is calculated for 15+ population whereas in Pakistan, it is estimated for population 10+.? LAHORE – Like other countries of the world, International Literacy Day will also be observed in Pakistan on Tuesday (today) with a pledge to make over 780million adults of the world literate. The day, first time observed on September 8, 1965, is being celebrated in the midst of UN Literacy Decade.

Literacy is just the ability to read, write, listen, comprehend and speak a language, yet millions in the world including 55 per cent of Pakistanis are deprived of this fundamental right. The pathetic aspect of the matter is about two-thirds of the illiterate are women in the world and remaining four billion people of the world have a challenge to bring them into its folds. “Pakistan has one of the lowest literacy rates in the world and according to the United Nations Educational, Scientific and Cultural Organisation (UNESCO), it is 55 per cent and Pakistan stands at 160th in total countries of the world.

This indeed is a very alarming situation and a challenge which must be met with resolve, determination, and action by all those who can help,” said Amanat Foundation Chairman Nisar A Memon in a massage. He says illiteracy is a matter too serious to be left to the government alone, and each and every citizen must rise to the occasion to contribute his or her part to bring right of literacy to about 50million Pakistanis. The ‘Power of Literacy’ is the theme of 2009 Literacy Poster as literacy empowers the people to be enlightened and self respecting citizen.

Our hard earned freedom shall be severely impacted and socio-economic emancipation will remain a dream without literacy, which is recognised as a lever of change and remedy for social transformation. Our country is classified into the 3rd World countries mainly due to the connection of poverty with education or Literacy Rate. Poverty is the biggest disadvantage and the largest obstacle in the development of our country. Our country is an agricultural country and the profession of many people living in Pakistan is with this vast category.

The people in this category and the farmers are unable to feed their families fully and as a result, development stops and population increases. This great increase in the population of the Pakistan is a hindrance in the correct and efficient caring of the family. That is why many of the people are unable to provide such and such level of education to their children and so the literacy rate of the country on the whole decreases. The second main problem is related to the people living in villages and other small places. It is said that the population of the villages is many times more than of the urban people.

This is why the people cannot teach and train their children and a vast number of illiterate children remain in the country. One of the main cause of low literacy rate in Pakistan is the male dominated society that creates many obstacles in the way of acquiring education by female citizens of the country. Especially people living in interior areas do not allow their daughters to schools, also wadera system reign in small areas of the country where these prestigious people feel insult to send their females out of the house and keep them bound in the four walls of the house.

This kind of attitude decreases the literacy rate of our country. Such people are not aware of the teachings of Islam and many Ahadees in which our beloved Muhammad (PBUH) has said: “To achieve education is mandatory for both male and female and seek it no matter if you have to go to China. ” We must try to create awareness among the citizens of Pakistan so that we may get a remarkable position throughout the world by the power of knowledge.

Reason for low literacy rate in pakistan are wide and numreous in which more imporant poverty , illiteracy specially among the male, over population, low femaale literacy(reason are coeducation, distance of school,patriarhal system in our society), lack of awareness of importance of education, urbanisation, low government spending or low expenditure of government as compare ot defence expenditure which is 25:1,larege family size . low literacy among low section of Society like rural people ,people of katchi abadis, all these and many more reaons which are simultaneously effect on our literacy rate.

As we know that literacy rate of Pakistan in 2010 is 56% which is very low literacy rate. There are many reasons for the low literacy rate in Pakistan. One of the main reason is the Non-seriousness of the government towards education. Providing free books or providing free education to the low income people is not enough. They should take major steps which will really work in increasing the literacy rate of Pakistan. To expect something without doing anything will not work. They should open government educational institutions as many as they can and provide best and qualified teachers or professors. 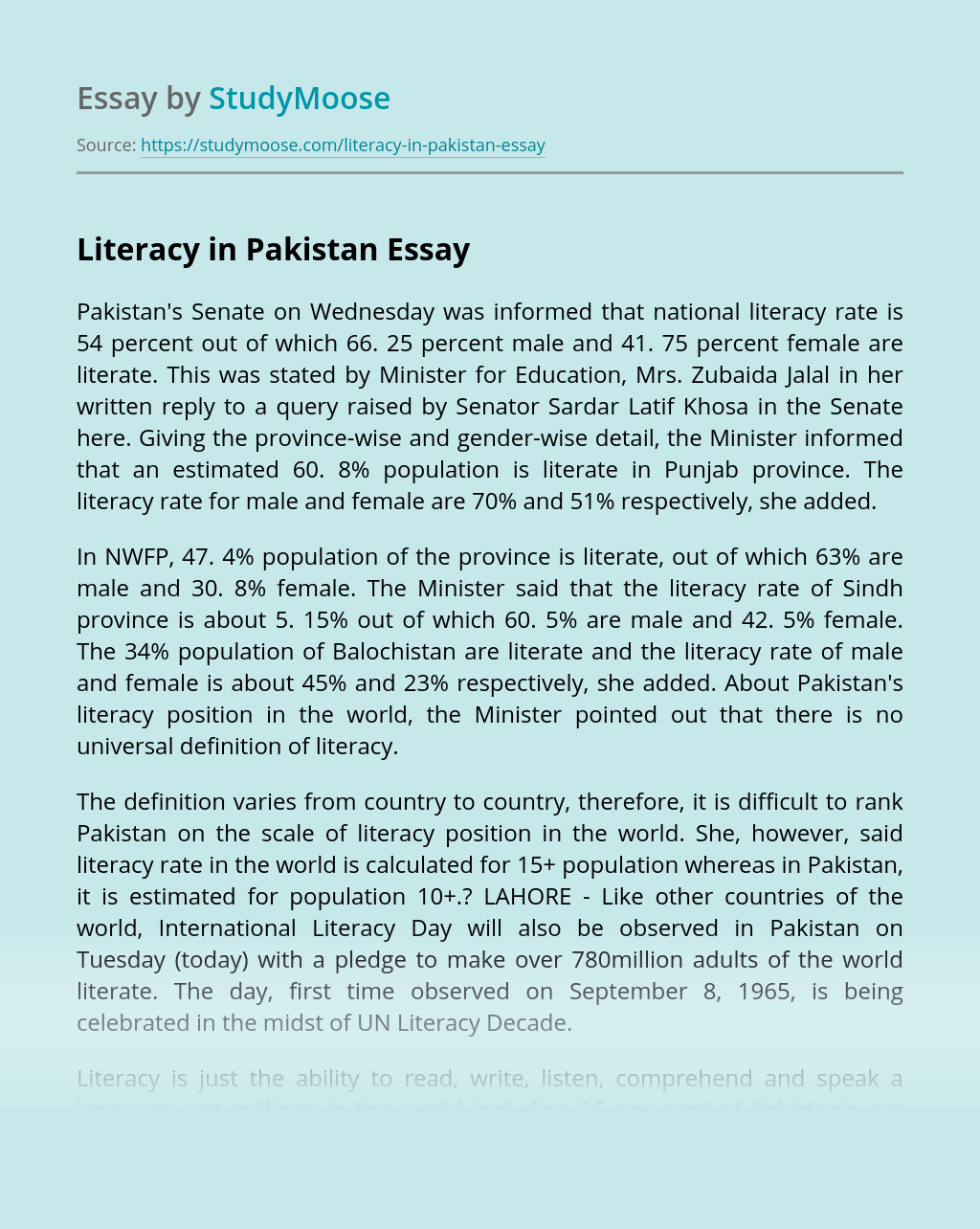 Professional ethics concerns the moral issues that arise because of the specialist knowledge that professionals attain, and how the use of this knowledge should be governed when providing a service to the public. Conducting oneself in an ethical manner is an essential part of being a professional. The concept of Professional Ethics is partly comprised...

The Human Rights Act 1998 (also known as the Act or the HRA) came into force in the United Kingdom in October 2000. It is composed of a series of sections that have the effect of codifying the protections in the European Convention on Human Rights into UK law. All public bodies (such as courts,...

View sample
Get Essay
The Radical Idea Of Marrying For Love

In the beginning of the twentieth century, George Bernard Shaw portrayed marriage as the factor for two individuals to come together. His comments were humorous about being marriaged and that a couple was suppose to become married because of specific factors, one being profound love. He thought that extreme, extensive love, and being wed up...

Edward Marshall Boehm is a company that is all about delivering quality while focusing on Nature. This report will include the vision, mission, SWOT, internal and external environments, and a strategic decision from my team in specific detail. Edward Marshall Boehm had a vision that was different from other businesses. Their vision was, “To capture...

View sample
Is It Easy to Be Young?

Childhood is a period of life when you can do many crazy things without thinking about the consequences. You don’t need to be worried about the money that you should bring to your family or about the food that they will eat. But being young is not easy and I want to explain some reasons...