According to Balado et al. (2019), path-finding for pedestrians is a current challenge in many cities and as further development occurs; the displacement of pedestrians in urban environments continues to grow. Balado et al. (2019) have also stated the concern of current pedestrian navigation services disregard for accurate navigable ground. The assumption that pedestrians traverse along the side of the road with sidewalks (which is not always true) and the lack of consideration for crosswalks, provide routes that are not safe. However, in the last few decades, improvements in current detection and tracking technologies focused on walking dynamics through analytical models and simulation software have been developed.

Don't use plagiarized sources. Get your custom essay on
“ Safety Concerns in Pedestrian Navigation ”
Get custom paper
NEW! smart matching with writer

Inaccurate maps that guide pedestrians to consider making unsafe choices or approach unsafe environmental obstacles at its worst case may cause loss of life. As a society, we need to ensure that future guides are designed sufficiently so that people are prevented from having to make such considerations in the first place. To examine this problem, this paper will describe various types of maps and mappings that are used to guide pedestrians and the processes used to create these maps, while highlighting some of the potential inaccuracies and lack of considerations that can lead to such unsafe travels and decisions.

New digital mapping technologies and systems focused on improving pedestrian route choice behaviour will be discussed, as well as the environmental, cultural and social factors that influence and interact with the design, distribution, validation and operational strategies of such maps.

To assess some of the safety concerns regarding pedestrian navigation, we will address a variety of concepts and tools. The concept of pedestrian behaviour, decision making, cognition, mental map, environment, the structural approach, geographic profiling, the environmental preferences approach, the evaluative approach, and natural hazard is defined in context to be used further in this paper: followed by an introduction of tools such as Google Street View, map matching and detection techniques, simulation of pedestrian flow, prediction models, and methods for environmental assessments to pedestrian injury. Behaviour

The elements that make up behavioural geography are essential considerations to make when assessing the possibilities of pedestrian decision making while navigating. This highly cognitive oriented paradigm, in general, focuses on cognitive processes, spatial reasoning, decision making, and behaviour. In addition, the concept of the social construction of nature (the way in which humans process the world in our minds) affects pedestrian behaviour by the role of linguistics (how one gives meaning, understands, and interprets nature through human character, nature as a force, and the material world), mental maps (where one creates memories associated with space through identity, patterns, and practical or emotional meaning) and science (concepts and analysis motivated by politics, economics, and ethics) Hemakumara and Ruslan (2018).

With pedestrian decision making, choosing alternatives based on values and preferences through the cognitive process of problem analysis determines whether or not a rational or irrational decision is made. Personal biases such as selective perception and optimism are of concern here where these biases may “alter risk perception” Sharot et al. (2011). The actions of concern decided by pedestrians as described by Arason et al. (2013) may vary and not be limited to:

Crossing intersection with traffic control, with right of way,

Pedestrian decision making may also vary depending on the cognitive state of the individual and the state of the environment at the time such that a blend between an intuitive and rational decision may be made Kahnemans (2018).

Human-environment interaction, which is classified into three groups by Nag (2016) are dependencies, adaptation and modification. These classifications play a significant role in the analysis of considerations required to mitigate the safety risks of pedestrians.

Dependencies, how an individual is dependent on nature for a living. As an example, in the context of a pedestrian, a person may be dependent on the amount of light or whether or not it’s raining outside to become a pedestrian.

Adaptation, a person modifies themselves and behaviour to adapt to the current environment. For example, a pedestrian may wear reflective clothing when it’s dark or hold an umbrella if its raining or sunny.

Modification, the environment is modified to suit the needs or preference for comfortable living. For example, an urban planning modification of an intersection to provide better visibility of drivers and pedestrians or a lighting system installed on a previously dark street.

The structural approach in the context of this paper is concerned with pedestrian safety in urban development. Each geographical location has different rates of risk associated with it and the infrastructures that determine the possible links between these places Yew et al. (2010). How each location and the paths from one location to another is structured such as the number of physical elements, the types of signage, and how the structure influences a pedestrians mental image may be significant contributors to the rates of risk. A current challenge to point out here is the fact that most cities and urban developments are designed for the perspective of a driver and “… promote[s] the displacement of the citizen by foot, bike and public transport” Balado et al. (2019).

Although geographic profiling is known for investigating criminal activity, the information can be used for influencing pedestrian navigation assistant suggestions for criminal activity avoidance Yew et al. (2010). The geographic profiling concept and methods may also be used to direct pedestrians for routes based on an individual or group preference. 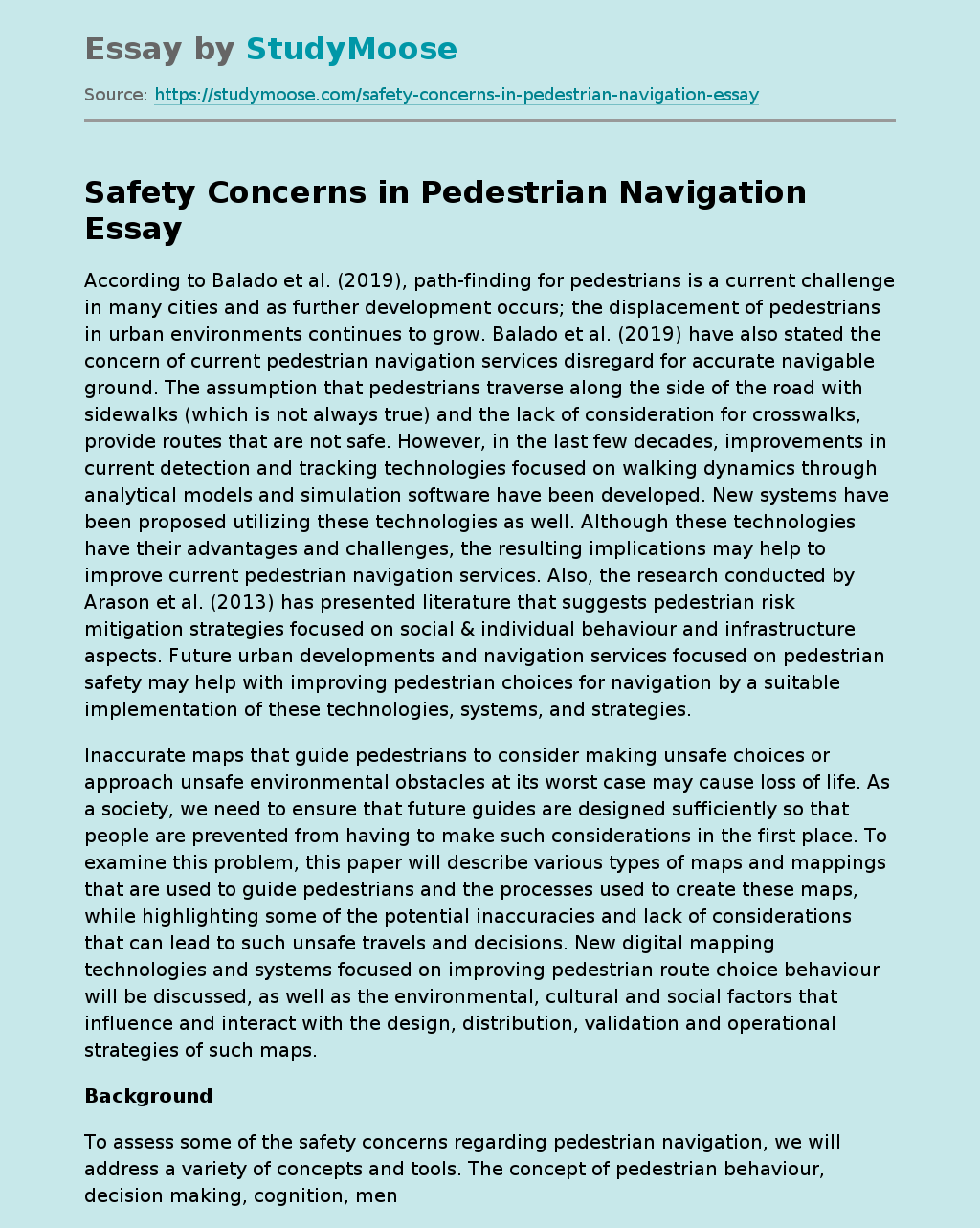