Comparison of the Unifications of Italy and Germany

Both Italy and Germany became unified in the mid to late 1800s after years of unrest that started with the 1815 Congress of Vienna, where both of these countries were split up into many states. One can compare and contrast these unification processes because they had many similarities and differences. In order to properly assess these situations one needs to look at the individual factors that led to unification and how they can be compared. While there were similarities in the Unifications of Italy and Germany, overall the processes were very different.

Don't use plagiarized sources. Get your custom essay on
“ Comparison of the Unifications of Italy and Germany ”
Get custom paper
NEW! smart matching with writer

DIVISION OF EACH COUNTRY

Despite the differences in the unifications of these two nations, there are some clear similarities in the factors that let to unification. One of the most obvious similarities one can point out is the fact that in order to be unified, these countries were separated first. From 1815 to Unification, Germany was separated into 39 states, whereas Italy was separated into 11. The separation of these nations was decided at the 1815 Congress of Vienna, and they were separated for different reasons.

Italy was divided into the 11 original states it had been in before the Napoleonic era; whereas the number of states in Germany was significantly reduced from somewhere around 300 to 39.

This was mainly thanks to Count Camillo Benso di Cavour, the Prime Minister of Piedmont starting in the 1850s, and the man who primarily led the Italian Unification process. Cavour came into office with a very strong understanding of financial matters and by 1860 its trade increased by 300 percent and Piedmont’s 800 kilometers of railway track was one third of the peninsula’s total. Due to the powerful nature of these states, they were both able to take a lead in the unification process.

Another clear similarity between Italy and Germany was Austria’s involvement in the unification of both nations. In Germany, Austria was the leading power of the German Confederation. The Habsburg Empire controlled most of the political doings in the German Confederation, until Prussia became more economically advanced. It took Prussia defeating Austria in the Seven Weeks War for Unification to be able to take place. In Italy, Austria had full control of Lombardy. In the failed 1848 revolutions, Charles Albert of Piedmont attempted to wage war with Austria and failed greatly. In the actual unification process, Piedmont went to war with Austria again in 1859, and with the help of Napoleon III managed to settle on a treaty.

THE INVOLVEMENT OF NAPOLEON III

In both unification processes Napoleon III was somehow involved. He was the nephew of the great Napoleon and wanted to prove himself to be the true successor of his uncle. This led him to be very politically involved, although he never did manage to conquer much territory in Europe. His involvement in German Unification was mainly in the Franco-Prussian War. The Prussian Chancellor Otto Von Bismarck provoked Napoleon into declaring war with Prussia, mostly in an attempt to draw the South German states into an alliance with Prussia, as he knew they feared being conquered by the French. Prussia won the Franco-Prussian war, even capturing Napoleon for a period during the process.

In contrast to Napoleon’s opposition to Germany, he was one of the leaders who made unification possible in Italy. He greatly assisted Piedmont, and was the reason they could go to war with Austria. He also was the one who stopped war with Austria and managed to create a treaty that, while it didn’t initially please Cavour, ended up resulting in many states joining Piedmont. Napoleon also assisted Cavour by letting the Piedmontese army occupy Rome in order to defend Northern Italy from Giusseppe Garibaldi’s army.

Both Italy and Germy’s unification processes started with failed revolution in 1848. In Germany, 1848 revolutions led to a significant increase in nationalism, and in some way started the divide between Prussia and Austria. In Austria, revolution led to the resignation of Metternich, and Frederick Wilhelm IV initially seemed to support Prussian revolutionaries. However eventually the revolutionaries and liberals were defeated when the Frankfurt Parliament, a national assembly, was dissolved in 1849. This did spark a lot of tension between Prussians and Austrians, primarily because Prussians blamed Austria for the fall of the revolution.

Italy underwent failed revolutions mainly headed by Mazzini and his Roman Republic. Mazzini was a revolutionary and a nationalist, who founded Young Italy, the first real Italian political party. He led the revolution in Italy, and when the Pope fled he set up rule in the Roman Republic. His rule only lasted for 100 days, but it was a republic based upon nationalist and liberal ideas. The Roman Republic fell in 1849 when the French overtook it, leaving a French garrison guarding the Pope that lasted until 1870. This influenced many nationalist and liberal ideas in the people of Italy.

As one may expect, the unifications of these nations came mostly from nationalism across the various states. In Germany, nationalism came mostly from the 1848 revolutions. The Prussians blamed the Austrians, and nationalist ideas spread throughout the nation. Nationalism also appeared in Germany when there was opposition against Denmark in the disagreement over Schleswig and Holstein, and the German people wanted to have a unified voice through which they could oppose Denmark. In Italy most of the nationalism came from the influence of Metternich and was carried out by Garibaldi. Garibaldi was an incredibly talented army leader, who was vital to the creation of the Roman Republic. During Italian Unification, he was the one who conquered Southern Italy, and with his allegiance to Piedmont he was the reason that the two halves of the peninsula joined together.

Each country’s unification came about under different leadership. In Germany, there was only one real leader: Otto Von Bismarck. He was almost entirely in charge of the Unification process, and his diplomacy was arguably one of the main reasons for the Unification of Germany. In Italy there were three leaders: Cavour, who was the prime minister of Piedmont and was the reason for the advancement of the state as well as being diplomatically gifted; Garibaldi, who was a devout nationalist and used his military power to aid the annexation of Sicily; and Napoleon III, who’s outside help from France enabled a lot of the revolution to take place. In Italy, none of these leaders could have alone led unification-they all relied greatly on each other.

CONTEXT OF UNIFICATION: ECONOMICS VS. CHURCH

The basis of each country’s unification was actually slightly different. Germany unified for heavily political and economic reasons, whereas in Italy unification resulted in something more church based. In Germany, Prussia became incredibly powerful economically through the _Zollverein_, and that was a very strong reason for why other German states were keen on joining Prussia for a united German front. Italy did not have any economic power comparable to the _Zollverein_, other than Piedmont’s economic position in Italy which still wasn’t quite as exceptional as Prussia’s. However a circumstance of unification that Italy faced was that once the nation had been unified, there was no freedom of religion: Catholicism reigned supreme by the order of the Pope. In Germany, unification was disconnected from religion and there was little done over the existence of both Protestants and Catholics within Germany.

The opinions of the Great Powers of the unifications of Italy and Germany varied between the two. In the case of Germany, the great powers cared very little about the unification. If anything, there was worry coming from the Great Powers because if the outcome of the Franco-Prussian war involved France gaining power they feared the new Napoleon could rebuild his uncle’s empire. As far as the Great Powers were concerned in the way of Italy, Cavour had made a smart move by involving Italy in the Crimean War on the side of Britain and France and actual gained quite a bit of support from the Great Powers. If Cavour had not gotten involved in the Crimean War, Piedmont would not have had the faithful support of Napoleon III, which proved crucial in unification.

The results of each of the unifications were different. In Germany, the nation was established as a federal state. Local governments were able to retain a portion of control, and the people of Germany stayed relatively separate between their states. Italy on the other hand became a unified state. It was pronounced the Kingdom of Italy in 1870 and the separations between the states involved were almost entirely abolished. Italy felt itself very much like a people and under the dominant Catholic religion; it was a completely unified state.

THE GOAL OF EACH NATION

While the clear goal in Germany was a unified nation, Italy did not have the same clear-cut objective. Bismarck wanted unity from quite early on in the process, as his main goal was to rule over Germany and to be the leader of an entire nation. Cavour on the other hand, was strongly opposed to unification for a long time. It wasn’t until unification was inevitable that Cavour stood behind it. While Garibaldi was pro-unification since before 1848, unification seemed like an implausible goal to most Italians.

Overall, the unification processes of Italy and Germany were more different than they were similar. Bother unifications were very similar in their physical processes, as they both took diplomacy, war, and strong leaders. However, despite the similarities in how unification came about, they came from different bases of reasoning politically, economically, and socially.

Comparison of the Unifications of Italy and Germany. (2016, Aug 06). Retrieved from https://studymoose.com/comparison-of-the-unifications-of-italy-and-germany-essay 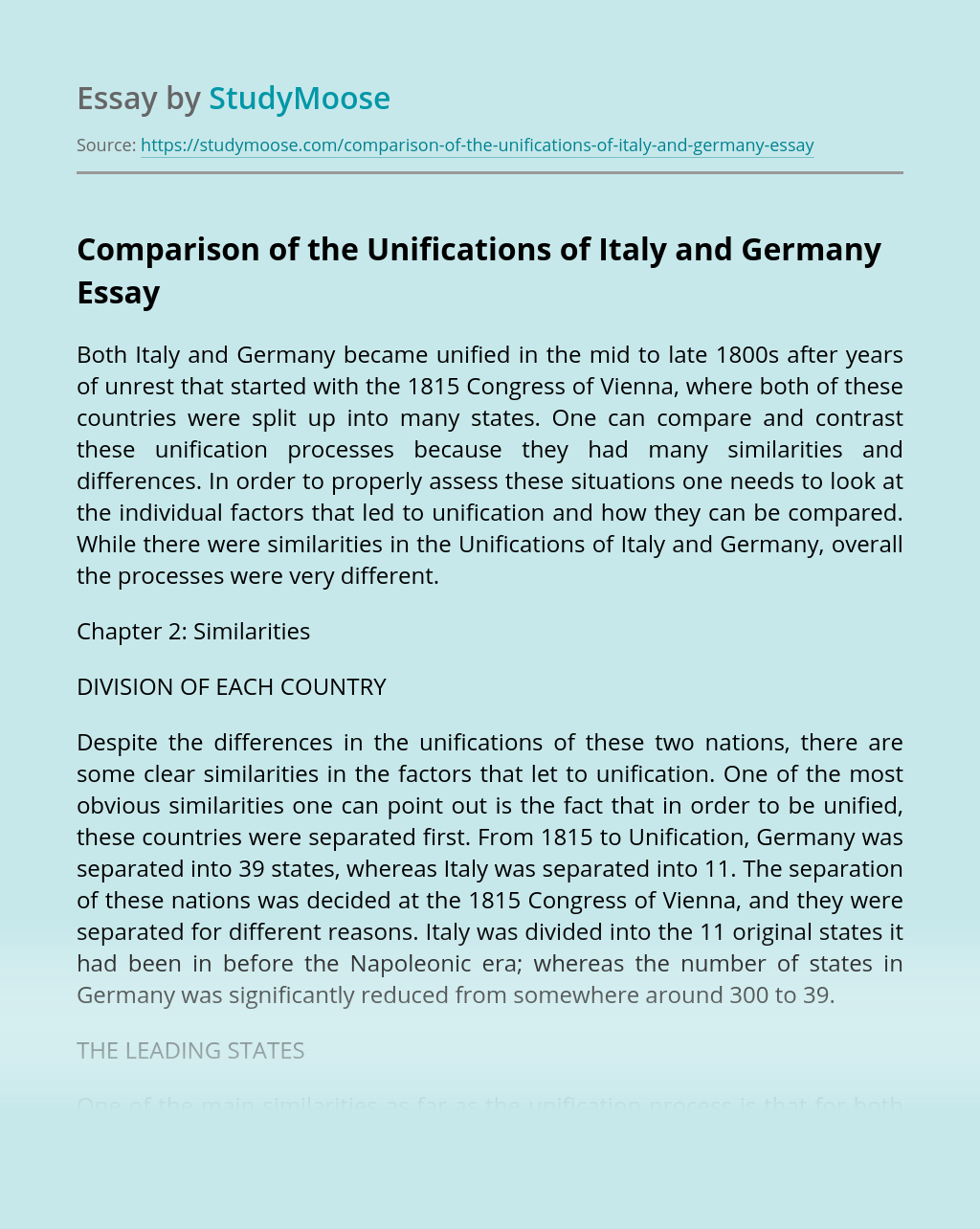