A True Depiction of Renaissance Period in Italy

Robert Browning is known as the master of dramatic monologue. One of the most popular works of the English playwright is My Last Duchess. It was published in what was considered his finest collection of poems in 1842, Dramatic Lyrics. He belong to a generation where Charles Darwin’s theory of natural selection shook the foundations of religion; even science and the arts were in a constant state of flux. Browning was born in England in 1812 to a wealthy family. His father has a huge collection of books, which the young Browning took interest in.

Don't use plagiarized sources. Get your custom essay on
“ A True Depiction of Renaissance Period in Italy ”
Get custom paper
NEW! smart matching with writer

He learned various languages, music, horsemanship, and other things from being tutored at home, but he also attended the University College in London for a year and then decided to study on his own. At the age of 12, he was already writing poetry. His rich parents supported him in all his literary endeavors. In 1846, he married fellow poet Elizabeth Barrett. For many critics, My Last Duchess is the perfect dramatic monologue.

It clearly separates the speaker from the poet, there is a clear suggestion of an audience who never actually appeared in the poem, and the disclosure of the speaker’s character while he was discussing the portrait.

The poem is radiating with brilliance, written by a man with Renaissance values. Thus, it reflects the intrigue, greed, and the flourishing of the arts, characteristic of the Italian Renaissance. This 56-line poem definitely captures the spirit of the era. The setting of the poem is Ferrara, located in northern Italy.

The ruling family, the Este family, built a magnificent castle and made the city a center of learning and the arts. Members of the Este family were patrons of great painters such as Leonardo da Vinci and Raphael (Lancashire 32). The characters of the poem resemble characters that exist during the period.

The speaker of the poem is loosely based on the life of Alfonso II, the last duke of the city, and his first wife, Lucrezia de’ Medici, who died at a young age. Similar with the duchess in the poem, Lucrezia died under suspicious conditions. There were speculations that she may have been poisoned. In the poem, the duke is about to marry the count’s daughter. Historically, Alfonso II married the count’s niece. Historically, Louis Friedland, a poetry critic, published an article discussing how Browning came across a similar plot to the My Last Duchess, the story of Alfonso II’s marriage with Lucrezia.

Because of his fascination with the Renaissance period, he visited Italy in 1838 where he could read the biography of the duke (Lancashire 45). The themes of My Last Duchess is another example of the presence of Italian Renaissance in the poem. It exemplifies the attitudes of a Renaissance duke—proud, arrogant, and authoritative. Moreover, the speaker is depicted as a lover of the arts. He treats his wife, the duchess, as a possession whose mere job is to please him. He likes the portrait not because it reminds him of his wife but because of its aesthetic beauty, being painted by a renowned artist, Fra Pandolf.

He was proud of the portrait in the same material way as he is proud of that “Which Claus of Innsbruck cast in bronze for me! ” The duchess is now just an image under his total control. The duchess now becomes an art object, as can be seen in the line, “I call that piece a wonder, now” (Brooks et al. 291). Now emphasizes his appreciation of his wife only as an object, nothing more, nothing less. Indeed, the word my in the title reveals a sense of ownership and last that duchesses are sequence of collections, which can be replaced once outdated.

His arrogance is evident by his unconcern in justifying whatever he actions he had done to the duchess and his “standards” of how a wife should act. Browning is one of the poets of his generation who was heavily influenced by the Italian Renaissance and vice versa. He represented the flourishing of the aesthetic and the discussion of humans, not solely focused on morality and religion. In My Last Duchess, the sins of humans are lurking throughout. The duke’s justification of the implied killing of the duchess is to control her (Brooks et al. 292).

In a society which was becoming increasingly complex, it was important for people to gain control to obtain stability. It was nothing short of natural for a duke at the time of Renaissance to have absolute power. By reading the poem, readers are confronted by issues essential in the Renaissance period. They are caught between the horror of what happened to the duchess and the beauty of the poem. They must decide whether the subject or the method of portrayal dominates the poem. The question arises of whether art is purely aesthetic or whether art has to have a moral component.

Renaissance is a period where there is a humanistic revival of the influence of the classical expressed in the richness of literature and arts along with the emergence of modern science (Brooks et al. 292). Robert Browning, in his My Last Duchess, portrayed a scene of Renaissance Italy. He was not concerned primarily in recounting a historical incident, he even used fictitious names. The plot is simple, but he wanted to add a touch of the Renaissance flavor through the medium of presentation, his characters, and the psychological impulses. The poem was not didactic as it never passed judgment on any of the characters.

Clearly, Italian Renaissance acts as the setting of My Last Duchess. It can be inferred from as simple as the chosen location where the plot transpired to the historical resemblance of the story with the marriage of an actual duke. Importantly, the dominant themes of the poem undoubtedly characterize the period. It gives the readers a picture of how a Renaissance duke actually behaves and what are the important concepts of the time—control, beauty, humanity, and the arts.

I. The topic of the article is My Last Duchess which is written by Robert Browning.

II. There are many reasons that point that Italian Renaissance acts as the setting of My Last Duchess.

III. Clearly, Italian Renaissance acts as the setting of My Last Duchess.

A True Depiction of Renaissance Period in Italy. (2016, Aug 21). Retrieved from https://studymoose.com/a-true-depiction-of-renaissance-period-in-italy-essay 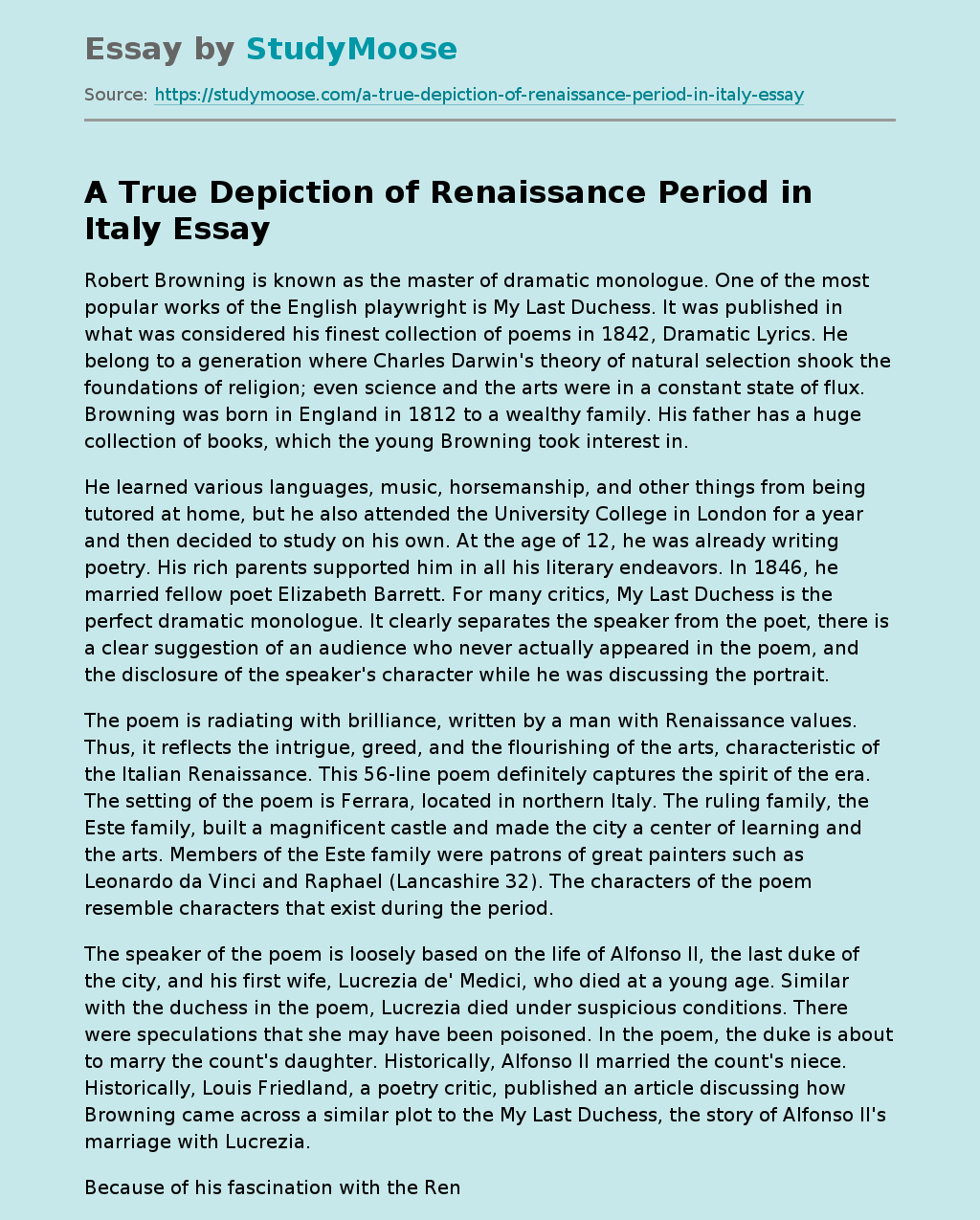