Loss of Humanity in The Pedestrian

In “The Pedestrian” Ray Bradbury wanted to portray an event that happened one night while taking a walk with a friend, stopped by a police officer who didn’t get why they was walking and stated “Well don’t do it again”(Person 50). The characterization and symbolism in this short story demonstrate how society might turn out when humankind depends upon technology. “We have too many cell phones. We’ve got too many internets. We have got to get rid of those machines.

Don't use plagiarized sources. Get your custom essay on
“ Loss of Humanity in The Pedestrian ”
Get custom paper
NEW! smart matching with writer

We have too many machines now” (time 1) even today Bradbury shows his distrust in technology through this quote given a month before his 90th birthday. Ray Bradbury’s “The Pedestrian” shows his own distrust of technology, and view of how society will end up if to reliant on technology.

Through characterization, Ray Bradbury shows that if humankind advances to a point where society loses all humanity, then humankind is better off ceasing to exist. Mead is in many ways Bradbury’s only true representation of humanity left in the year 2053 A.

D., through describing him as have a “shadow of a hawk” (26), which relates him to a wild free spirited bird. Mead is also seen as humanity because he is associated with light, which is symbolic for soul, Meads house beams “loud yellow illumination, square and warm in the cool darkness” (29). While the loss of humanity is displayed in the “lone” “metallic voice” that the robotic cop car has and in the descriptions of the towns’ people being “gray phantoms” that live in “tomblike buildings” in a “graveyard” of a town showing how the life of the town dies with the sunset(25-26).

In multiple ways one can see how Ray Bradbury is Mead himself. Bradbury’s love for writing can be related in essence to Meads love for walking. While Mead and Bradbury are directly related due to both of them are writers. Bradbury stated “[Television is] a really dreadful influence on all of us” while Mead doesn’t even own a television which relates in a way that they both dislike the television altogether.

The short story shows the not too distant future in an unfavorable light. The once free thinking society has been corrupted by the simple convenience of technology. Bradbury shows his own distrust by demonstrating how technology will make humankind lazy and useless. As shown in the title walking has become obsolete, Mead is not a pedestrian; he is, in a city of 3 million people (27), the pedestrian. Bradbury demonstrates that if not controlled, technology in the near future will do as it wants, when it wants. In this short story Bradbury demonstrates how the television has destroyed literature and society as well through Meads thoughts “Magazines didn’t sell anymore. Everything went on in the tomblike houses at night now”, “the tombs, ill lit by television light, where the people sat like the dead” (28, 29). While also showing through the cop car how writers job is not the only job ceasing to exist by stating “the force had been cut down from three cars to one. Crime was ebbing; there was no need now for the police” (27).

Loss of Humanity in The Pedestrian. (2016, Jun 08). Retrieved from https://studymoose.com/loss-of-humanity-in-the-pedestrian-essay 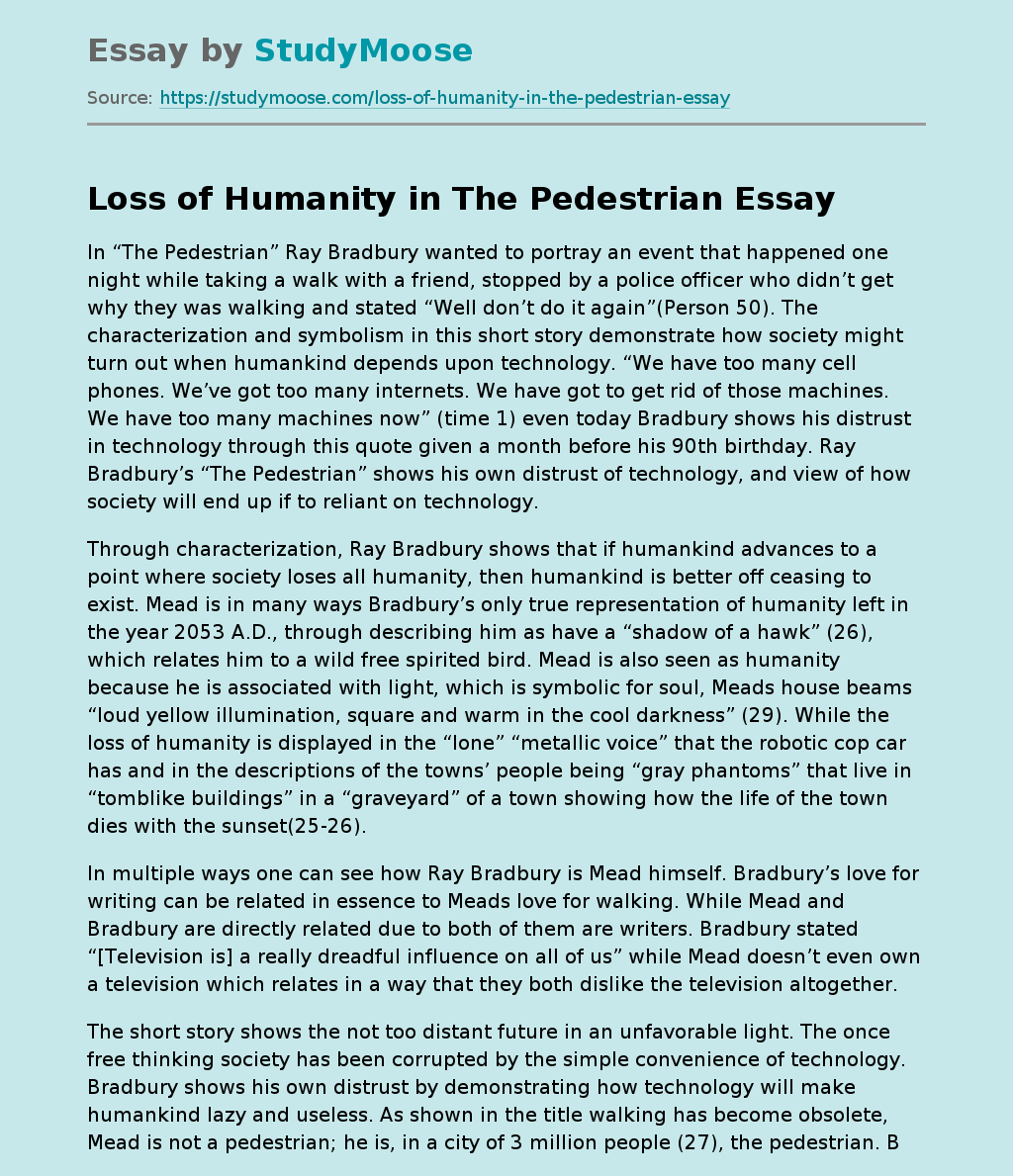