As long as the earth has existed, changes have occurred in the natural landscape. Ecology, a term created in the 19th century from the Greek “ oikos” (household) and “logos” (study), is the study of nature as an orderly system of interaction between plants and animals with their environments. (Allen, 4).

An ecosystem undergoes change as time (in tens and hundreds of years) passes.

The thrust of ecological change can be inferred by site conditions, by interactions of the species that are present, and by more stochastic factors, such as availability of seeds and colonists, weather conditions, and the time of disturbance. (Ecological Succession, 1).

Ecological change is a transformation that takes communities to a situation of dynamic equilibrium with the earth. Ecological  succession happens because each species deals with the problem of colonization over time as to abiotic or nonliving factors; (weather, light and soil characteristics) and biotic or living factors: (abundance of natural enemies and competitive abilities of other species).

The integration of biotic and abiotic interaction is an important part of healthy ecology. These components change equilibrium. For example rain, temperature, and the difference in soil affect different types of plant and animals that can live in each place; eg; a  desert has cacti because of little rain.

Yet as succession progresses, these species will be replaced by more competitive or k selected species (“Ecological Succession,” 1).

Ecosystems tend to change with time until a stable system forms. The type of succession which occurs depends upon climate and other characteristics of a given geologic occurrence. First come pioneer organisms such as grasses from a plowed field or lichen on rock. They modify the environment until creating conditions less favorable for themselves, but establishing conditions under which more advanced organisms can live. Over time the succession takes place in a series of plant stages which lead to a stable final community  which originally existed. This final stable community is called a climax community.

Although this concept was popularized by Fredrick Clements who believed that the successional sequence of communities were highly predictable and ended in a climatically determined stable climax, with all nature in an orderly and well regulation system of interaction, the idea was abandoned by modern ecology in favor of nonequilibrium concepts of how ecological systems function.

Most natural ecosystems experience disturbance at a rate that makes a climax community unattainable. Climate change often hinders the occurrence of a climax state. Also, available species pools through range expansions and introductions can also reshape communities. Climax communities are typically seen as the ultimate development of the ecosystem.

There are two types of succession: primary and secondary. Primary succession is the colonization of a section which previously never supported an ecosystem (sand  dunes, new ponds, volcanoes). Secondary succession has previously supported ecosystems whose progression to a steady state has been prevented by inhibiting factors such as grazing or fire.

Secondary succession takes place after the   clearance of ag land, spores , seeds, and vegetable organisms are viable, and there is an influx of animal and plants.According to Naturlink (p1):

These factors demonstrate that the development of an ecological system over time (ecological succession) occurs similarly with many other factors and changes to product given the set of ecosystem attributes. 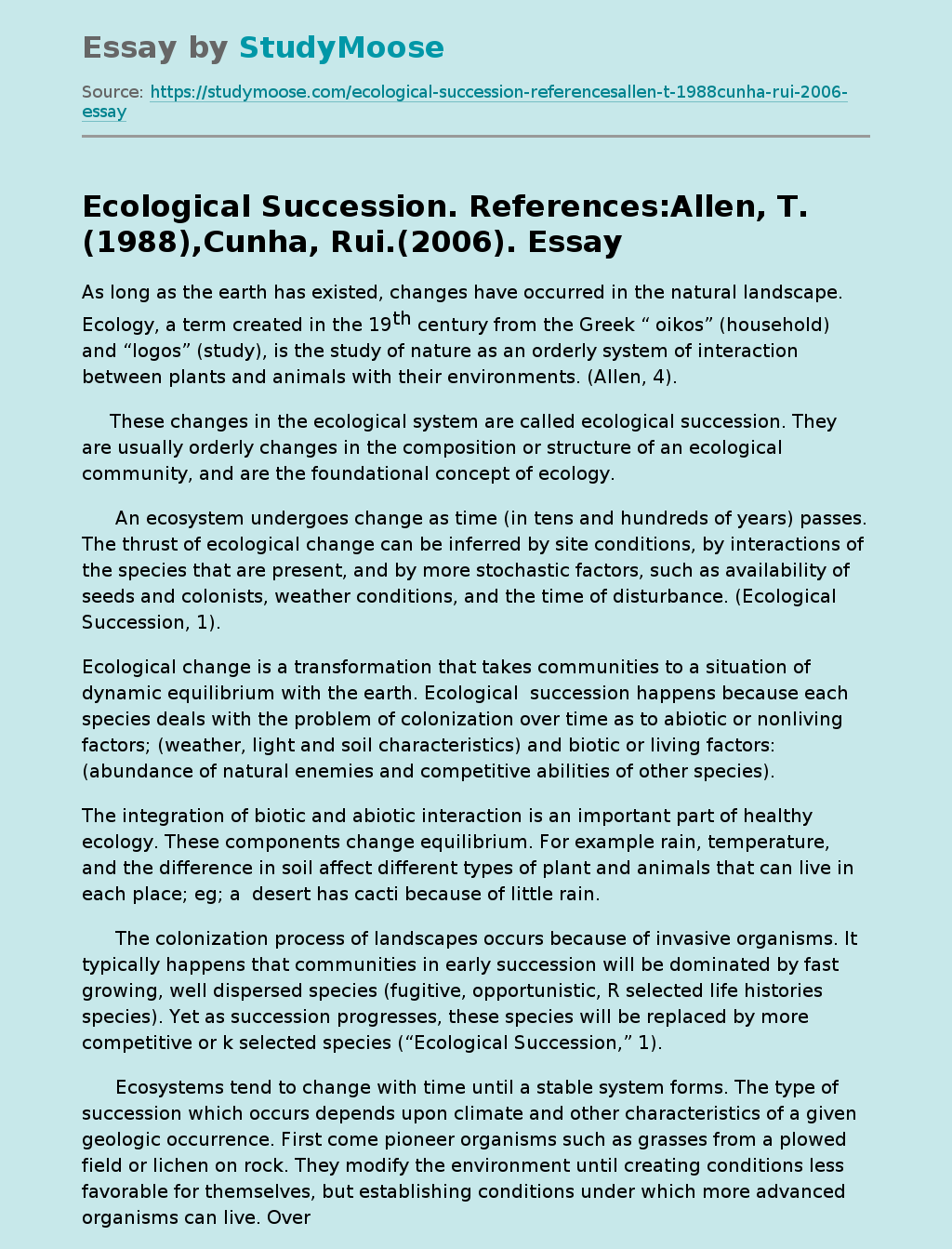