Christian and Biblical references have been involved in the craft of writing since the birth of religion; or at earliest, the composition of the Bible. Biblical Symbolism in “Rime of the Ancient Mariner” Samuel Taylor Coleridge’s poem, which was written in 1797, has been widely discussed throughout literary history. Although critics have come up with many different interpretations of this poem, one idea that has remained prevalent throughout these discussions is the apparent religious symbolism present throughout this poem.

The Ancient Mariner contains natural, and biblical symbolism; however, the religious and natural symbolisms, which coincide with one another, play the most important roles in this poem.

Don't use plagiarized sources. Get your custom essay on
“ Christian and Biblical References Hidden Within the Rime of the Ancient Mariner ”
Get custom paper
NEW! smart matching with writer

Apocalyptic and natural symbolism dominates the core of this poem. The biblical symbolism found in this poem mainly reflects the apocalypse, as it deals with the Mariner’s revelation that good will triumph over evil, and his acceptance of all nature as God’s creation.

Beginning with the main issues surrounding “The Rime of the Ancient Mariner” it is impossible to believe that Coleridge was not thinking of the mysterious wind that blows on the Mariner, without any awareness of the wind as a Biblical symbol of the Holy Spirit.

Coleridge could also associate the murder of the albatross with the crucifixion of Jesus Christ. The reader is told that the Polar Spirit “loved the bird that loved the man / Who shot him with his bow” (Line 404). Signifying a strong tie/bond between the two.

This bond not only relates to the ‘love between the man and the bird,’ but rather, the connection between an individual and religion.

It is doubtful that someone with Coleridge’s Christian background and faith could fail to see an analogy with God who loved his son who loved the men that killed him. Trying to further understand the symbolism tied into this poem, it is important to take other sections of the piece into account.

Another example of symbolism is the fact that the albatross is hung around the Mariner’s neck like a crucifix. Ah! Well-a-day! What Evil Looks / Had I from old and young! / Instead of the cross, the Albatross / About my neck was hung” (Line 139). As Coleridge writes, the image of the Albatross slung around the neck of the Mariner symbolizes the crucifixion of Christ. The crucifixion of Christ has been discussed for centuries; this Biblical reference of this image is immense. Through the use of words, Coleridge is able to portray a sense of darkness and a loss of hope, comparable to loss of hope when our savior Jesus Christ was nailed to the cross.

Looking deeper into the mind of Coleridge and further analyzing his work, another abstract approach to viewing the death of spiritual and/or Biblical reference can be seen by dissecting the text. The “cross” in “cross-bow” hints at the murder of Jesus, which logically places the albatross as a symbol for Christ. Since the publication of Coleridge’s piece “The Rime of the Ancient Mariner” It is thought by many literary experts that Coleridge deliberately created these symbols and images with Christian meaning in mind; but if true, why?

In order for Coleridge to encapsulate the readers full attention and challenge their knowledge these truly hidden symbolisms and literary techniques are needed. Coleridge further attempts to navigate his readers though this work by using references and wording that individual’s can connect with. The apocalypse is heavily reflected upon throughout this poem as Coleridge combined the vivid colors, the ocean, and the death fires of “The Ancient Mariner” with the terror and desolation of the days of wrath in order to symbolize the true apocalypse.

Down dropt the breeze, the sails dropt down, / ‘Twas sad as sad could be; / And we did speak only break / The Silence of the sea! / All in a hot and copper sky, / The bloody Sun, at noon, / Right above the mast did stand, / No bigger than the moon. / Day after day, day after day, / We stuck, not breath nor motion; / As idle as a painted ship / Upon a painted ocean. ” (Lines 107). The section of the poem after the Mariner kills the Albatross is a description of the emptiness and desolation that the Mariners experience, and the curse that is over the ship.

This section of the poem has tremendous correspondence to the apocalyptic story. The language and form in this part of the poem represents the images and words, which have traditionally described the wrath of God and the guilt of man in Christian terms. Continuing through the poem one stanza reads, “The souls did from their bodies fly – / They fled to bliss or woe! / And every soul, it pass’d me by / Like the whizz of my crossbow! ” (Line 220). It is at this point in the poem that the Mariner feels the guilt for having killed the Albatross and the deaths of his shipmates.

His actions haunt him and death appears the only way out. “An orphan’s curse would drag to hell / A spirit from on high; / But oh! More horrible than that / Is the curse in a dead man’s eye! Seven days, seven nights, I saw that Curse, / and yet I could not die” (Line 257). Cleary seen in the quotation above, the curse resulting in the murder of Albatross left the Mariner viewing death as the only possible option to relieve himself of the haunting, tragic images that left his crew dead. Under the moonlit sky as the Mariner’s ship still sails cursed, but then he witnesses something that changes his perception of God and his faith.

“Beyond the shadow of the ship, / I watch’d the water-snakes: / They moved in tracks of shinning white, / And when they rear’d, the elfish light / Fell off in hoary flakes. Within the shadow of the ship / I watch’d their rich attire: / Blue, glossy green, and velvet black, / They coil’d and swam; and every track / Was a flash of golden fire. / O happy living things! No tongue / Their beauty might declare: / A spring of love gush’d from my heart, / And I bless’d them unaware: / Sure my kind saint took pity on me, / And I bless’d them unaware. / The selfsame moment I could pray; / And from my neck so free / The Albatross fell off, and sank / Like lead into the sea. ” (Line 272).

It is at this point that the Mariner begins his transformation; leading him closer to God allowing him to see the beauty in ll of God’s creations and creatures as he forms a respect for the presence of God in nature. This reconciliation in the Mariner’s life breaks the curse and shines a light of hope into the eyes of a man who was praying for death. Coleridge uses the wrath and guilt of the apocalypse, but adds his own ideas of divine love and conversion, which lead to paradise. Even though the Mariner must continue with his penance, he is free of God’s wrath and is able to appreciate and love all of nature as God’s creation. Throughout this poem there are many examples of biblical symbolisms in nature.

Coleridge uses different elements of nature, such as the sea, as symbols of religious thought or beliefs. The sea is where the decisive events, the moments of eternal choice, temptation, and redemption occur. While at sea, the Mariner makes the eternal choice to kill the Albatross. This choice is eternal because once the Mariner has committed the act of murder; there is nothing that he can do to change it. As a result of the Mariner’s decision, a curse falls over the ship and the Mariner is sentenced to eternal penance.

The eternal penance that he must serve is a reminder to the Mariner of the choice that he made. However, even after the death of his soul, the Mariner experiences redemption when he recognizes and learns to love all of God’s creations. It is a known fact that Coleridge’s thoughts and feelings where rarely affected by his beliefs, especially the apocalypse. The apocalyptic story deals with God’s freeing the soul of man from the pains of sin and death, and lifting it into paradise. After the Mariner kills the albatross, he feels as if he is under some sort of curse.

However, the Mariner goes through as conversion, which thus releases his soul from the pains of sin and death so that he can once again obtain happiness. There are two essential steps in the conversion process. The first step occurs when imaginative powers mythological appearances of nature, so that the slightest willful act appears to bring down a terrible vengeance. The willful act that the Mariner partakes in is the killing of the Albatross, and the terrible vengeance that occurs as a result of this action is the curse that is cast over the ship.

The second part of this conversion process takes place at the greatest moment of hopelessness. At this point, the presence of divine love within humankind appears, and emphasizes the appearance of the natural world. “The Rime of the Ancient Mariner” is not a direct religious sermon, but there are many strong references to the Christian religion throughout the poem, which stem from Coleridge’s own religious beliefs. Although Coleridge did not take the religious images in this poem directly from the Bible, much of his inspiration for the poem seems to be based on religious ideas, especially that of the Apocalypse.

To conclude, Coleridge integrates natural symbols, which are associated with the religious symbols, in to this poem in order to further emphasize his belief that God is present everywhere in nature, and that one can be sent into this state of paradise when this love for God is discovered. By using imagery from the apocalypse and religious symbolism in nature, Coleridge created an incredible poem, which expresses how the realization of divine love within oneself has the power to heal pain and suffering, while bringing oneself to a state of clarity, tranquility and enlightenment.

Christian and Biblical References Hidden Within the Rime of the Ancient Mariner. (2016, Dec 25). Retrieved from https://studymoose.com/christian-and-biblical-references-hidden-within-the-rime-of-the-ancient-mariner-essay 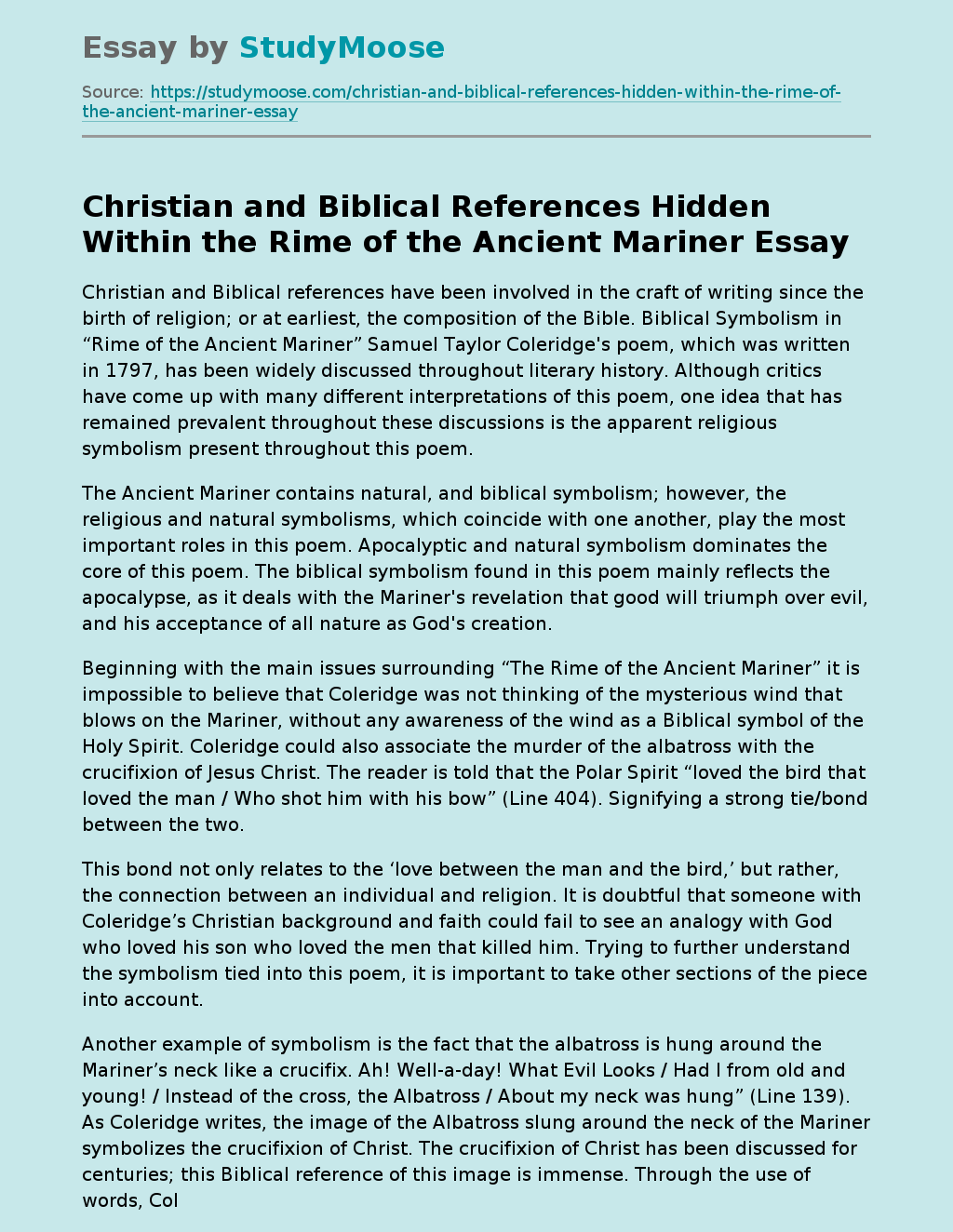