Part one of The Rime of the Ancient Mariner opens with a third person omniscient narrator: ‘It is an ancient Marinere, And he stoppeth one of three. ’ This person represents Coleridge as he knows everything that is happening in the poem, and he is setting the scene for the rest of the lyrical ballad. Other people may take the view that the omniscient narrator represents God, as he is seen by religious people as the only person who can possibly be omniscient.

Don't use plagiarized sources.
Get Your Custom Essay on Narrative Methods Used in Part 1 of The Rime of the Ancient Mariner Just from $13,9/Page

This instantly injects elements of religion into the poem.

’ The mariner is responsible for telling the embedded narrative, which is an element of the Gothic. The mariner then takes over the story, telling his tale within the tale.

The ballad is structured in Quatrains for all of Part 1, but this changes to symbolise a change in the narrative. Stanzas six and eleven end in the same line: ‘The bright-eyed Marinere. ’ The seventh Stanza is reversed at the end of the poem to show when he is going away from the familiar and when he is returning to it. The genre of this piece is a Lyrical Ballad, with elements of Romance and the Gothic. It draws on elements of the Romantic by its recurring themes of nature, extremes of emotion and religion. It also draws on elements of the Gothic as it includes religious imagery, bad weather and supernatural themes.

The ballad is set at a wedding in reality, but the embedded narrative in Part 1 is set in the land of ‘mist and snow. ’ This represents the isolation of the Mariner as he strays away not only from land and equilibrium but also from God. This distance from God is physical, as it points out that he left the ‘Kirk,’ ‘the hill’ and ‘the light-house top’ representing him moving away from where God is, but also mental because the Marnier commits a great misdeed: ‘with my cross I shot the Albatross’ and it is almost as if he and God are not at peace any more.

There are connotations of the Mariner’s tale happening a long time ago as he uses archaic lexis in his version of events, such as ‘Kirk’ for Church, ‘thee,’ ‘thou,’ and ‘thus. ’ Coleridge begins the poem with ‘It is an ancyent Marinere,’ the language used shows that the Mariner is a strange being as he is referred to as ‘it’ rather than ‘he. ’ The lexis used is archaic as both ‘ancyent’ and ‘Marinere’ are non-standard spellings. Although the wedding guest uses quite outdated terms, we can tell that the Mariner is older than him because his vocabulary predates to Coleridge’s times.

Part 1 of this ballad uses internal and alternate rhymes throughout to create a flow of events. The Mariner tells the wedding guest twice ‘there was a ship’ in stanzas three and four which shows that the Mariner is persistent, but the reader does not know why he is so eager (we later find out that he had to tell this tale to the wedding guest). The wedding guest starts to become aggressive at the Mariner’s persistence, telling him ‘Now get thee hence, thou grey-beard Loon! Or my Staff shall make thee skip.

This illustrates the wedding guest’s ignorance, and reflects what the reader would probably do if they were in that situation. The Mariner is described as being almost wizard-like in appearance with his ‘skinny hand,’ ‘grey beard,’ and ‘glittering eye’ which could be taken as being quite supernatural; an element of the Gothic. The Sun is mentioned throughout the poem as a motif for God, and is personified as ‘he. ’ The Sun is present a lot before the Mariner shoots the Albatross but is a less prominent character afterward, showing that God is displeased with the Mariner.

Coleridge uses Pathetic Fallacy to show the Mariner’s mood, by showing the ‘Storm and Wind, A Wind and Tempest strong! ’ This is also an element of the Gothic. Coleridge also uses a similie to describe the ice: ‘As green as Emerauld. ’ The colour depicted is very natural, which is an element of Romance and the word ‘ice’ is repeated many times throughout to show the reader that the Mariner is literally surrounded by ice, representing his desolation.

The ice ‘crack’d and growl’d and roar’d and howl’d,’ which personifies the ice using animal imagery. This shows the unforgiving and harsh nature of the ice, which the Mariner is encapsulated by. The Albatross is a symbolic religious symbol, and religion is referenced throughout Part 1, showing Coleridge’s personal views and depicting elements of the Romantic and Gothic. The moon is used as a motif for change and is only introduced moments before the Mariner shoots the Albatross, which could be taken as foreshadowing.

Narrative Methods Used in Part 1 of The Rime of the Ancient Mariner. (2017, Jan 31). Retrieved from https://studymoose.com/narrative-methods-used-in-part-1-of-the-rime-of-the-ancient-mariner-essay 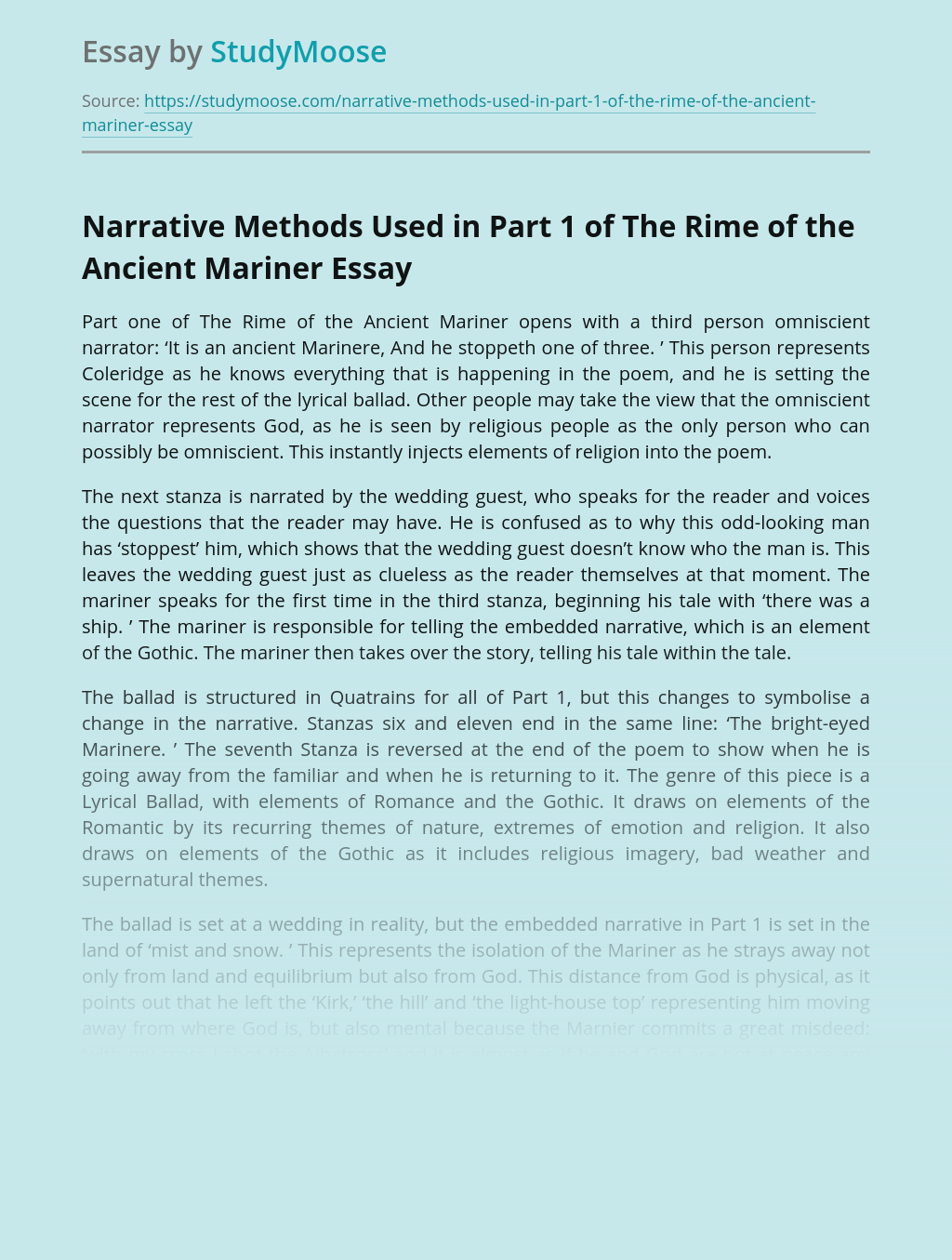 This exchange reflects Shakespeare’s time because sponges were new and popular in Elizabethan society. scientists in the 1600s were studying the human body. rulers gained power by surrounding themselves with loyal officers. common people felt that they were ignored by their royal leaders. c Repeated references to ears and hearing in Hamlet are an example...

Shonda Rhimes “Sweet Baby” Scandal Episode first appeared on ABC in April 5 2012. In this episode she aims to convince her readers of the importance of self-reputation over individuality. Through the character of the newest client of Olivia Pope & Associates, 27-year-old decorated war hero, Sully St. James encounters the battle between what matters...

Mark Twain considered his novel “Adventures of Huckleberry Finn” as “a book of mine where a sound heart and a deformed conscience come into collision and conscience suffers defeat.”  This claim is valid, as the story showed the title character in several situations wherein he was bothered by his conscience yet he chose to act...

Schapiro’s psychoanalytic approach, that is, his search for the underlying meaning and relevance to the painting, * Thesis: While Schapiro’s argument shows a well-considered analysis of the artist’s life as a source of interpretation of Cezanne’s work, much of it is based on suggestion and fantasy. As in all historical interpretation, Cezanne’s work should be...

Tell Tale Heart and the Lotter

American author Henry James believed characters are only as interesting as their reactions to particular circumstances. The declaration he made can be supported by numerous pieces of literature that we have actually come across. The way a character reacts to the scenario they are put in can tell a lot about their true character. Two...