Literary Commentary for Rime of the Ancient Mariner

Samuel Taylor Coleridge’s “The Rime of The Ancient Mariner in Seven Parts” is a romantic fantasy ballad written in 1817. The title states the adventures and journeys of a cursed sailor. The story is told by an omniscient narrator with the use of the iambic tetrameter and trimeter. Within the omniscient narrator there is another persona, the ancient Mariner who tells his story to the wedding Guest. The rhyme scheme is abcb. The plot starts with the Mariner pulling aside the wedding Guest to tell him his story.

Don't use plagiarized sources. Get your custom essay on
“ Literary Commentary for Rime of the Ancient Mariner ”
Get custom paper
NEW! smart matching with writer

The Mariner compels the wedding Guest to listen to him using his glittering eye. In his story, the Mariner tells how he set out in a sea voyage with two hundred men to the South. During the voyage they come across an albatross, which is seen as a good omen for the sailors as it guides them through the sea. For no reason the Mariner shoots the bird with his crossbow. His fellow sailors scold him for killing the holy bird but when nothing seems to happen they let him be.

This makes them partners in the crime. As time passed the curse starts to show itself.

The wind stops as the sailors run out of water. One by one each of them die, except the Mariner. Before they die the men make the Mariner wear the dead Albatross around his neck as a sign of his burden. They die their eyes open and curse the Mariner once more. The Mariner is left alone in the sea witnessing slimy creatures climb upon the deck and swim in the sea.

When he appreciates the “slimy creatures’” beauty and blesses them the curse on him starts to lift and the albatross falls from his neck, sinking in the sea.

The poem continues with the nature and the supernatural world stepping in and helping him return back home, also deciding on his fate. At the end he finally arrives home, his ship sinks and he is rescued by a Hermit who announces him his fate. In the poem Coleridge highly makes use of poetic devices such as symbolism, irony, personification, metaphor, simile and onomatopoeia. Coleridge used onomatopoeia most frequently on the elements of nature. It helps bring the poem to life, as sounds tend to trigger memories. Personification too, is usually used on the nature.

It makes them seem as if they have a mind of their own and are more powerful than they really are. The albatross as a symbol is can have many meanings according to the perspective of the reader. From a religious perspective it can be seen as the Christian soul, and supported by “At length did cross an Albatross:/ Thorough the fog it came/ As if it had been a Christian soul/ We hailed it in God’s name” lines in the poem. When the men make the Mariner hang the dead albatross around his neck, it is a symbol of his crime and the burden it brings.

Also Coleridge used irony from time to time to emphasize the unusual and vivid images. For example: “Water water every where/ Nor any drop to drink. ”. It is also ironic that the Mariner doesn’t quite appreciate the Albatross, but blessed the snakes in the sea, which he referred to as ugly/disgusting slimy creatures. Although The Rime of the Ancient Mariner is said to be based on pious themes, there is more to it than religion. It has many themes such as; crime and punishment, pride and humility, atonement, man versus nature and the supernatural acting on the natural world.

The supernatural forces are active all through the poem. It is not quite clear where they belong to. They could be elements from a Christian God or it could be from a pagan world, or it could h-just be nature acting on the Mariner. Regardless of what and where they are it is clear that they are punishing the Mariner for killing the albatross. Also it is not clear why the Mariner shot the bird. It could be pride, or it could be because he possessed the power to kill and he used it, still somehow he defied the nature.

Later in the poem the seraphs say that the bird loved the men and guided them but the men betrayed and killed it. They also say that the Mariner did some penance but he has more penance to do. The Mariner is obliged to tell his story to other people until he dies so others will learn from his mistakes. The Rime of the Ancient Mariner is a cautionary tale which can be interpreted in many ways. It is unclear whether what Mariner tells the wedding Guest is actually real or if he was just hallucinating.

There are many parts in the poem that are unclear. Since Coleridge published the poem there have been many interpretations. Some people thought the entire poem was an allegory for the poet’s search for salvation, others said that it was influenced by Plato’s work. From the point of a high school student, the poem can be taken as a Christian poem since it has many references to it. Also it is not likely that one will be able to understand the whole poem without having any knowledge about religion and the supernatural at all.

Literary Commentary for Rime of the Ancient Mariner. (2017, Jan 26). Retrieved from https://studymoose.com/literary-commentary-for-rime-of-the-ancient-mariner-essay 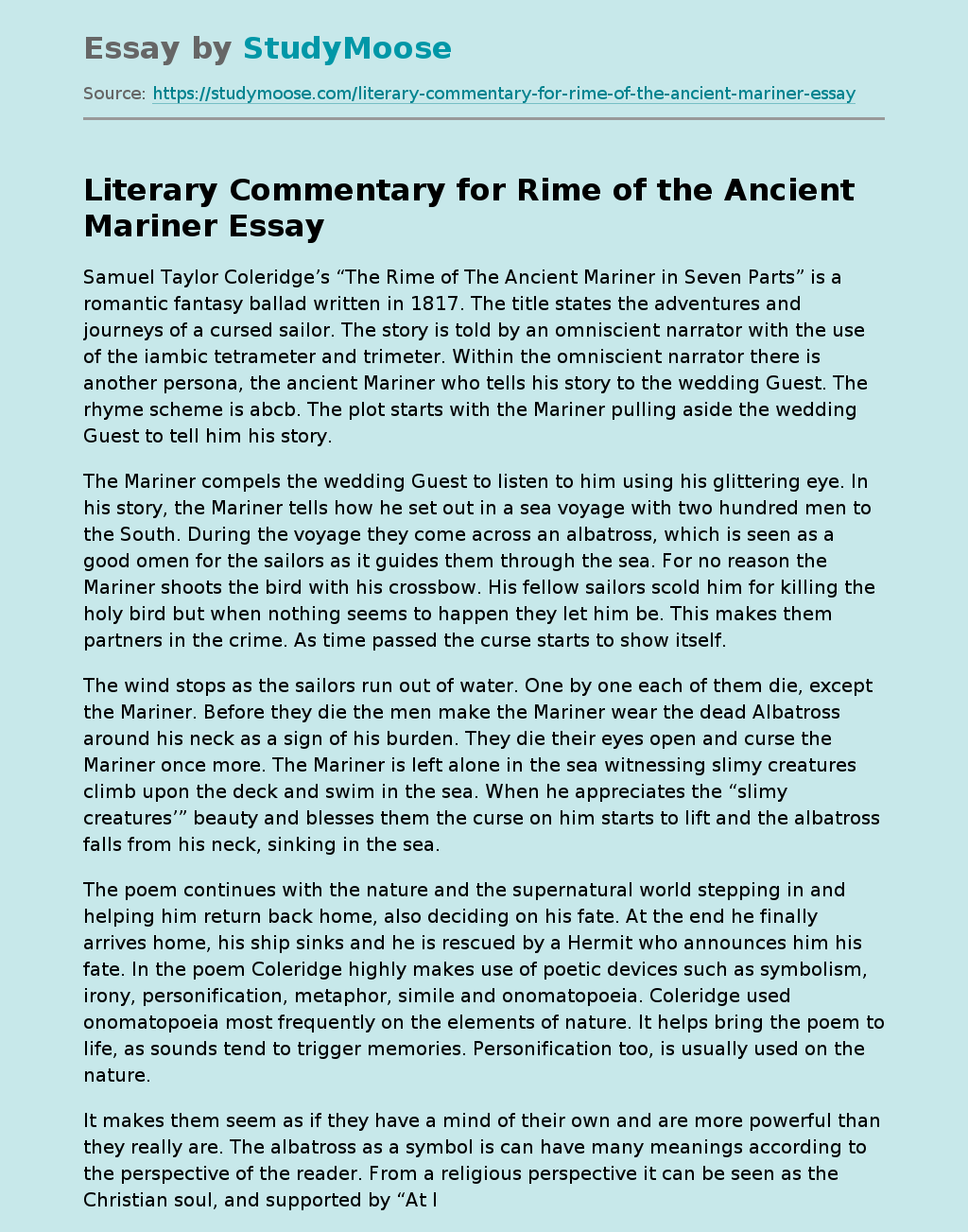