Critical Lens Essay on Rime of the Ancient Mariner

The Romantic period, which lasted from 1780 to 1837, was a time of innovation and imagination, especially in the field of literature (hearts-ease.org). Not only was literature changing, but so was the whole world. There was a strong sense of nationalism, self-expression, questions were asked, and people were more concerned with beauty than logic. “The Lyrical Ballads” was the first romantic piece published, and paved the way for the Romantic Movement which left a lasting impact on literature, culture, and way of life.

Don't use plagiarized sources. Get your custom essay on
“ Critical Lens Essay on Rime of the Ancient Mariner ”
Get custom paper
NEW! smart matching with writer

After the joint effort of William Wordsworth and Samuel Coleridge in the creation of “The Lyrical Ballads,” Samuel Taylor Coleridge wrote “Rime of the Ancient Mariner” in the 1790s. Coleridge used his imagination to create brilliant imagery, supernatural beings, writing that was abstract rather than realistic, and themes of nature. All of these elements combined to create the most renowned poem during the Romantic Period.

Rime of the Ancient Mariner” is a creative poem due to it’s splendid use of imagery.

Imagery helps to make Coleridge’s poem romantic because it is a powerful tool that articulates a message in creative and descriptive detail. Imagery is often referred to as “the sensations that language creates in the mind”. According to dictionary.com, imagery is the use of vivid or figurative language to represent objects, actions, or ideas. One example of a quote from “Rime of the Ancient Mariner” that has imagery is the following. “The death-fires danced at night; the water, like a witch’s oils, burnt green, and blue and white.

” (5 of 20). This is imagery because the reader can visualize the death-fires, and comprehend what Coleridge was trying to show the reader. This is very imaginative, and would not occur in real life. Because of imagery, Coleridge was able to create a very romantic mood, which helped strengthen his poem.

Another way that Coleridge’s poem is romantic is through intense detail and language that makes the supernatural appear to be real, and combines it with the known world. All who read it question if these supernatural beings really do exist. One example of how Coleridge uses the supernatural element is in the following quotation. “Is that a DEATH? and are there two? Is DEATH that woman’s mate? Her lips were red, her looks were free, Her locks were yellow as gold: Her skin was as white as leprosy, the Night-mare LIFE-N-DEATH was she, Who thicks man’s blood with cold.” (7 of 20). This quote uses superb details and descriptive language that makes DEATH and LIFE-N-DEATH appear to be real. Coleridge uses his extraordinary imagination to create two supernatural beings that appear real and frightening. Because the Romantic period had much more artistic freedom than the periods before it, Coleridge was able to use supernatural beings as a major theme in his poem.

Lastly, “Rime of the Ancient Mariner” is romantic because it is abstract and uses the theme of nature to show that people must love all living things. Coleridge created this abstract atmosphere by using literary elements such as theme and symbol. One example of Coleridge’s use of symbolism is in the following quote from the poem. “At length did cross an Albatross, Through the fog it came; As if it had been a Christian soul, We hailed it in God’s name.” (3 of 20). Symbolism is, according to dictionary.com, the practice of representing things by means of symbols or of attributing symbolic meanings or significance to objects, events, or relationships. The use of symbolism in the above section is evident when Coleridge compares the Albatross to a Christian soul, such as Jesus. The Albatross therefore symbolizes a holy figure, such as Simon in Lord of the Flies. The language in which Coleridge describes the Albatross is also very abstract.

Rather than the ordinary way of saying “then came an Albatross,” Coleridge uses his sense of passion, and not reason to write this poem. He says “through the fog it came; As if it had been a Christian soul.” Coleridge also uses the literary element of theme by using nature to show that all beings should show “love and reverence to all things that God made and loveth.” (20 of 20). This theme is addressed when Coleridge says, “O happy living things! no tongue Their beauty might declare: A spring of love gushed from my heart, And I blessed them unaware: Sure my kind saint took pity on me, And I blessed them unaware.” (10 of 20). This quotation takes place when the Mariner sees water snakes and blesses them.

In conclusion, “Rime of the Ancient Mariner” is a romantic poem because passion, not reason, ruled, and imagination was more important than logic. Coleridge was able to use his imagination to generate dazzling sentences filled with imagery, supernatural beings, and all of which included writing that was elusive as a replacement for the logical and mathematical wording. Due to the use of imagery, Coleridge expressed a message in creative and vivid detail. By using nature, Coleridge was able to teach the reader of the major theme in the story, to love all living things. Because of his imagination, Coleridge created an abstract story that people have come to respect for hundreds of years. Because of that, Coleridge became known as the father of the romantic period, and one of the greatest poets of that time period.

Critical Lens Essay on Rime of the Ancient Mariner. (2016, Jul 15). Retrieved from https://studymoose.com/critical-lens-essay-on-rime-of-the-ancient-mariner-essay 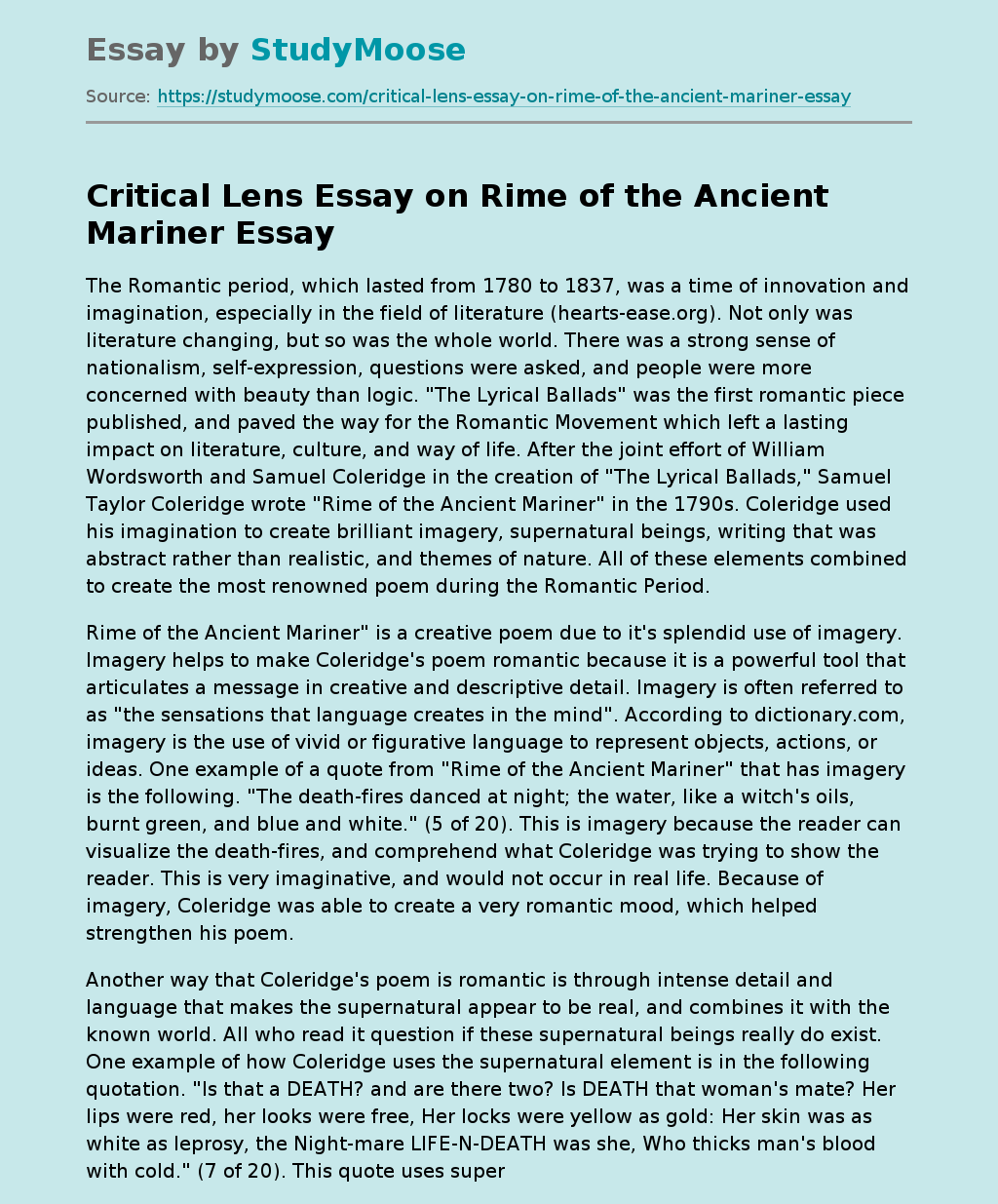