Vegetation Succession in sand dunes at Murlough Reserve - AS Geography

To begin with, we may start at seral stage one, known more familiarly as the ‘embryo dune’. Here the pioneer species, sea couch grass being a prime example, can withstand harsh environments, although many cannot which is why there is only 4 species at this stage.

Don't use plagiarized sources. Get your custom essay on
“ Vegetation Succession in sand dunes at Murlough Reserve – AS Geography ”
Get custom paper
NEW! smart matching with writer

The salt spray in particular prevents a number of species from growing; it is because these plants are halophytic (salt tolerant) that they are able to survive. In addition to the salt and winds, the organic content is low, at around 0.5%. The ground cover is only 5% and many of the plants grow individually. The PH is around 8, which is slightly alkaline.

At seral stage two, there are a number of differences which increase the level of biotic and abiotic components.

At this ‘foredune’, Marram grass dominates. The grass thrives on being buried in sand, and its rhizome root networks help stabilise the dune. The pioneer plants increase the organic content in the soil as they decompose releasing vital nutrients. The organic content is around 1.1%, which is an increase of 0.6% from seral stage one. The PH here becomes gradually more neutral, which is much more suitable for plants to grow. Due to this the number of species increases to 6, the foredune is nearly 25m from the sea, decreasing the level of salt spray.

At seral stage 3, we begin to see vital changes taking place, leading to the ‘yellow dune’ becoming much more suitable for a number of species. Both the nutrients from animal droppings, as well as the humas created as more species decompose into the soil, greatly benefit this dune. Therefore the organic content has reached 2.5%. Marram grass is still a dominant species on this dune; however other plants such as ragwort begin to grow rapidly. Here, now 80m from the sea, the number of species is over 11. This is due to nutrient increase, PH becomes more acidic and the dune is more stable. This is the first stage in which plants begin to co-exist.

At seral stage four, plants begin to thrive. At this stage, the sand has stopped accumulating as it is over 140m from the sea. The ground cover is now over 80%, and larger species such as heather and mosses begin to grow for the first time, as the soil content is over 3.3%. This is because, as discussed before, more plants are decomposing. The soil depth has increased dramatically as the plants long roots deepen it. The PH is also around 5, which is essential for larger species to grow. Smaller plants found at previous stages such as sea couch grass and marram grass begin to die out, as larger plants begin to consume the water, lights and nutrients, depriving others.

The final stage in the psammosere succession, is called the climatic climax stage. Here the soil, climate and plants are all in equilibrium. Woodland such as Oak and Birch begin to develop here, as the PH is ideal at 5, the organic content has reached nearly 4.2% and the ground cover is now 100%. The succession is now finished. 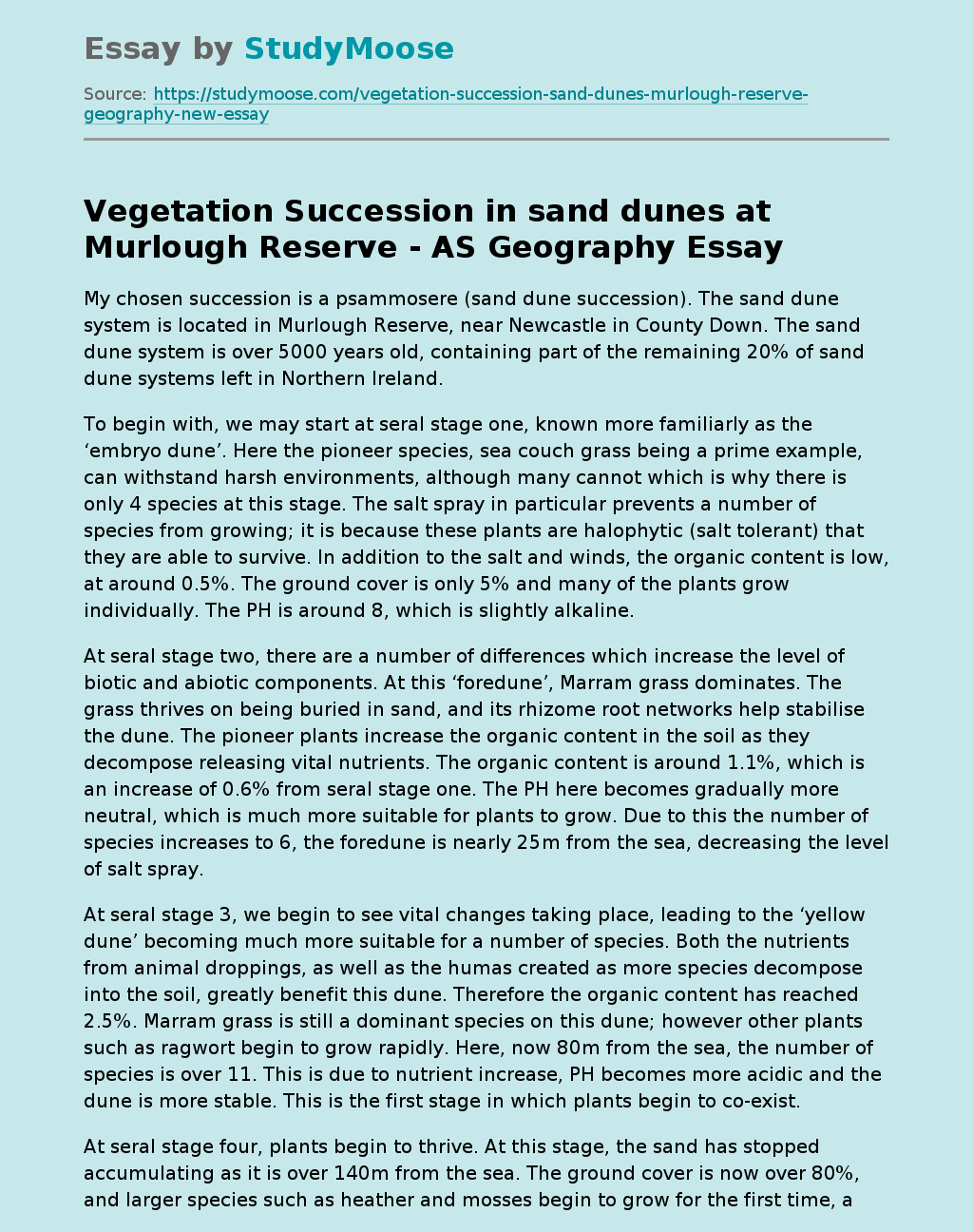