In The Cousins Tournament case, Al Blanchard decides that he is ready to retire as President of the family business, Grandview Industries. He has overseen the business for 27 years, along with help from his brother Morris. But with the New Year’s Eve announcement of Al’s upcoming retirement, a lot needed to be discussed, specifically in regards to the succession of the family business. In the current state of Grandview Industries, there was no succession plan. So with Al now planning a retirement, he and Morris were forced to plan for the business’ future.

Don't use plagiarized sources.
Get Your Custom Essay on Analysis of The Cousins Tournament Family Business Just from $13,9/Page

After great discussion, they sought the knowledge of a close business friend, Peter and an appointed council. The succession plan and the future of Grandview Industries would be determined through this council.

Some of the problems that Al Blanchard and Grandview Industries face are: the immediate succession plan; the succession plan following the appointment of the new President; defining the roles within the business; defining the company’s goals; and determining the executive committee or board/council.

These challenges will be tough, but will need to be addressed with the family business at the forefront. Even though Peter has been selected as a business advisor, Al and Morris Blanchard will need to approve all decisions; they will not be able to take the “back seat” at this time, especially if Grandview Industries will continue to be successful.

The central challenges that Al Blanchard, his family, and Grandview Industries faces are: the lack of preparation for the future leadership, the lack of succession planning, and determining who should be included in the succession plan.

Because family members assume active roles in various parts of their own family business, they must ensure that the above mentioned details are discussed well in advance, and ultimately determined prior to. But as we see in this case, because of some sibling-spouse conflict history, it has impacted the succession planning process. It has raised questions and concerns for both the family members currently involved in the business, the next generations, and the appointed chair, and its board members. Something that seems to some as minor, greatly impacts the family in its business mindset, and this is one thing that makes family-owned businesses truly unique.

I would recommend that Al Blanchard assume a board/president role, overseeing the family business, following his retirement to ensure that the company is adequately prepared for its future operation, in order to ensure shareholders’ success.

I think the process that is in place is appropriate. I think that choosing Peter as the chair of the succession board was beneficial to both the family business and the shareholders, as he has a clear understanding of the family, the business, and their future together. As a business consultant, I would advise that Al Blanchard remain in his current role until the succession is decided and also until that successor is properly prepared for the new role.

In the event that Al cannot or is not willing to remain as President of Grandview Industries, then I would advise that he at least remain as perhaps a board member or chairman so that he could oversee the company’s operations, while his brother, Morris, step in as President – whether it is permanent or in the interim. This would ensure that the success of the business is priority, especially in this transition stage. 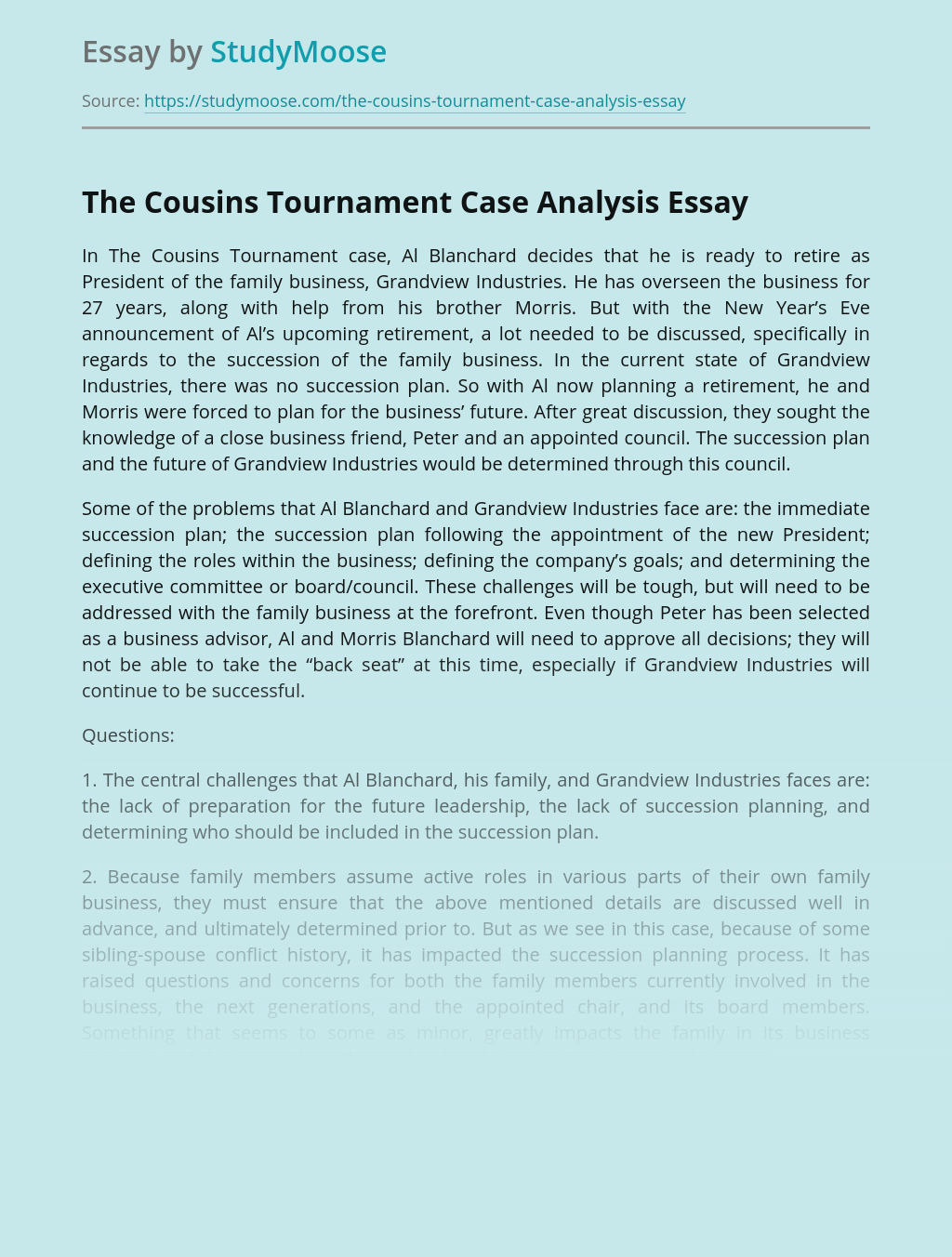 Simply In Time Stock Management Meaning: Just-in-Time (JIT) stock management is the process of purchasing and receiving stock for production and customer sales just as it is required and not previously. This indicates that the company does not hold security stock and operates with low stock levels. This strategy assists companies lower their stock bring...

Organizational Culture and Strategic Human Resource Management Introduction             Different scholars have given the term culture different meanings according to the context in which it is applied. People have different cultures from their area of origin, but organizations tend to have almost similar cultures governing the relationship between the employer and employees or among the...