Ecosystems are environments where biotic (living) organisms and abiotic (non-living) components interact together to create a functional, complex network of nutrient and energy cycling. These balanced environments take time, sometimes many years, to develop. During the course of development, species are replaced by other species within the ecosystem, a process known as succession. Primary succession happens when species grow in locations where organisms have never previously existed. Secondary succession occurs after an ecosystem disturbance. The basic difference between primary and secondary succession is the presence of soil.

Don't use plagiarized sources. Get your custom essay on
“ Primary and Secondary Succession ”
Get custom paper
NEW! smart matching with writer

What is an Ecosystem?

As stated above, an ecosystem is a place where biotic and abiotic components interact within their environment.

Living parts of an ecosystem include animals and plants. These animals and plants perform roles of producers, consumers, or decomposers. According to Raven & Berg (2004), these three roles are indispensable within ecosystems. Producers provide food and oxygen, consumers create balance between producers and decomposers, and decomposers prevent accumulation of dead organisms and waste products (p. 72). Non-living components of ecosystems include soil, sun, and weather conditions. Working together, the biotic and abiotic components cycle nutrients within the ecosystem. This is vital action because without nutrients the ecosystem and its inhabitants would not survive.

Where do ecosystems come from and how do they begin? The answer lies in the definition of primary succession.

The very beginning of an ecosystem happens when primary succession occurs. After devastation from volcanism, glaciations, or sand dunes, an environment is devoid of soil and living organisms do not exist. From this barren emptiness, primary succession begins with a pioneer community. Raven and Berg (2004) give an example of primary succession within Glacier Bay, Alaska (p. 87). In the case at Glacier Bay, rocks remain after a glacier’s retreat and the pioneer community is lichens. The lichens form soil, where colonies of moss thrive. The soil condition slowly progresses to the point where grasses and ferns can grow.

What happens when an ecosystem’s important cycle experiences a disturbance such as from fire or human activities? Once disturbed, ecosystems proceed through periods of changes that affect their structures and functions. This process of change, known as secondary succession, occurs very quickly because soil is already present. An example of severe destruction followed by a re-birth occurred in Yellowstone National Park. As a result of the fires that burned in the park in 1988, 1.2 million acres was scorched ecosystem wide (“The Great Fires of 1988”, n.d.). Amazingly, secondary succession happened quickly in Yellowstone National Park and within one-year herbs and lilies covered the ground area (Raven and Berg, 2004, p. 87).

Another example of secondary succession is witnessed in North Carolina where abandoned farmland progresses through almost predictable restoration stages. For the first year, the uncultivated farmland is overcome with crabgrass. The second year finds horseweed dominating the area. Since the horseweed roots strangle the horseweed seeds, the third year observations find completely different dominating species within the ecosystem. Regardless of which species dominate, the ecosystem has successfully experienced a re-birth thanks to secondary succession.

Many scientists are trying to learn all they can about ecosystems by observing healthy, thriving ecosystems in action. Humans, even though their intentions are often good, can upset the fine balance that exists in an ecosystem. Some examples are land clearing and damming can upset the sediment yield within river systems. A local project is actively testing two hypotheses regarding trophic structure and its affect on estuaries. This project is a joint effort between many organizations including the National Science Foundation. Many scientists all over the world are attempting to find answers to questions about saving natural ecosystems. Only in this way will our Earth be able to sustain future generations.

Since the components of ecosystems all work together to sustain their environment, changes in any single part of the process, biotic or abiotic, can affect the entire ecosystem. Outside influences can also wreak havoc on an established ecosystem. These disturbances can result from natural or man-made disasters. Primary and secondary succession, although their instances of occurrence differ, both provide a type of birth and re-birth to an ecosystem. By observing and studying ecosystems, along with primary and secondary succession changes, environmental scientists can learn how to help and not harm Earth’s precious ecosystems. 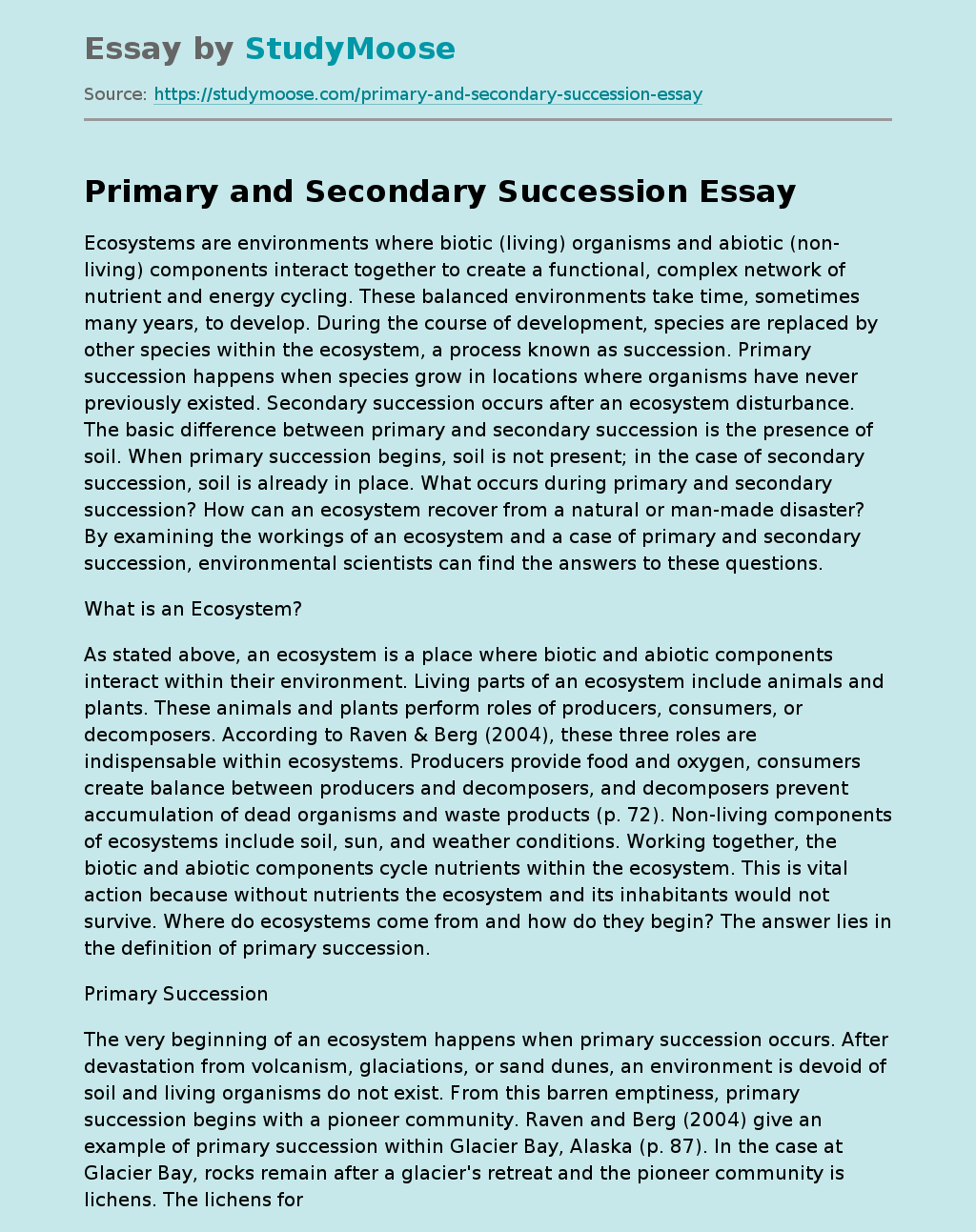