Socialization is the communication or interaction process in which the norms and values of a culture are learnt, whereby the individual gains knowledge to adapt his or her behavior to that of a social group (Groenman et al., p.202). It is significant to re-emphasize the idea of interaction in the above definition. Where there is interaction, influences are reciprocal and socialization is not merely a one-way process. Parents discover from children just as children do from their parents. In the same way, teachers learn from pupils, heads of departments from students, etc.

Don't use plagiarized sources. Get your custom essay on
“ Primary and Secondary Socialization ”
Get custom paper
NEW! smart matching with writer

Primary socialization is a technical term signifying the practice whereby norms and values are obtained (and by the way, has nothing to do with the nationalization of industry or going out to parties). Primary socialization is an exchange of communication between infant and others, but in the first instance, and for quite a time thereafter, it is an exchange in which information in dominates: if we know who we are, it is because, a long time ago, beyond the reach of the conscious recall, other people told us (Jenkins, p.

64). Primary socialization is the realm of categorization, and sets patterns for our receptiveness to being categorized in the life that follows.

As a child or as an individual, I had always been dreaming of achieving a higher status or class in the society.

I always sought perfection in the things that I do, and really did my best to achieve it. Sometimes, because of this quest for perfection, I tend to see the faults or errors in things, as well as in my personality. As such, I began to question the way I was raised (in a positive manner) and asked my parents how they took care of me while I was a baby. My mother recalls that she always had to play classical music for me and kept watching scientific and political news or documentaries. She also told me that she lectures about being a role model in the society while I was still in her womb, before she went to bed.

Primary socialization may be informal and it may denote the elementary education that takes place mainly inside the family circle. The explicit gender roles and behaviors are primarily learned at home. When I was a child, I remember myself being curious as to what my parents were doing. I noticed that my mother usually takes care of the laundry, cooking (including the preparation of the dining table), washing of dishes, cleaning the house and planting of small plants, flowers and herbs. My father on the other hand, busies himself with the repairs in the house. He fixes or repairs the busted electric bulbs, leaking water pipes, clogged sink, damaged roof and whatever appliances which were not properly functioning.

In primary socialization, a developing child learns what behavior is “usual”, “right” or “natural” according to the norms that are present in the group in which he grows and it may be in an informal manner. This course of action points to the child’s adjustment to social life, whereby the child develops from an instinctual being to a competent and disciplined social actor who has learned to take the expectations of others into consideration. Upon growing up, emulating my father, I was able to have similar voting habits like him.

During my childhood days, he was able to tell a story about his childhood life, where he usually faints in a difficult situation or get asthma instead of expressing anger. Somehow, I noticed that I am expressing the same ways of being ill as my father. I had a fight with a schoolmate once and the last thing I remember was I was already resting in a bed in the school clinic with an oxygen mask. I was not hit or physically attacked, however, the pressure or idea of getting into troubled rushed in my head causing me to panic and faint (in addition to the point that I had asthma during my childhood days).

Fainting during a fight was embarrassing for a guy like me and I had to search books in order to cure which I thought before as an “incurable disease of fainting”. From my father and from the books, I learned that my response or the behavior which I exhibited earlier was normal and that it happens to most of children who are in the same situation as I do. After learning this, I was able to develop self-confidence and learned to protect myself against other children’s insults during that time.

Primary socialization can also be formal, as in a school where a child is trained or educated the norms and values of those running the school (Tuckett, 2001, p.15).  Recalling the past, I learned that as long as I am doing things which are right (based from school laws and regulations), I do not have to fear my perpetuators and that I have the right to argue my ideas.

Somehow, I was able to strengthen my mental and emotional abilities and soon after, my social life had gained a favorable position in the school. I was also able to gain the respect of my teachers and some school administrators. Because of this respect, I told myself to study harder and see to it that I excel academically. Education became really important to me that I devoted most of my time studying and learning things from the book, as well as from my teachers.

Primary socialization includes, for example, the learning of language, the learning of relatively controlled behavior, and the learning of the ability to give and receive trust (things which I have learned from my parents or within my family). This form of socialization takes place in primary groups, for example, a family. A primary group is often defined as a group with close and diffuse relationships. The group members know each other as whole persons, and their relationships are close and emotional, although not necessarily free of conflicts (Furseth and Repstad,  2006, p.115).

In addition to primary socialization, sociologists also consider of a secondary socialization process which functions all through a person’s life. As a new member of a medical school or of a particular medical “firm”, or as a visitor to his fiancée’s parents, an individual may be socialized formally (as when a new recruit to an undergraduate society undergoes a beginning ritual or when a new patient in hospital is formally admitted to the ward).

Just like in primary socialization, secondary socialization can also be informal, by gradually attuning himself to the subtleties of meanings and actions in the new situation. The way in which recruits to occupations in medicine, the law, the army, sociology, or the administrative grades of the civil service are socialized so that they come to think, act as, and indeed “are” doctors, barristers, officers, sociologists or permanent secretaries, is a special form of secondary socialization termed professionalization.

Due to my profession, I learned to practice the professional ethics or exhibit the behaviors which are expected from a person of my status. In addition to this, it seems as if society often keeps an eye to the things which I did. My performance and my achievements (as well as some failures) were often noted by other people (especially our nosy neighbors) which made me learn or understand that I have to perform better and show a better performance. It also made me perform actions which conforms to the norms of the society and see to it that I do not violate any law which the society has set in my path.

The norms and values that exist within social groups are maintained by processes that sociologists conceived of as social control. Again, social control goes on informally as well as formally. Informal processes range form the uncomplicated fact that is generally easier to get along in a social group if deviance from norms, in what has been regarded as both a profound and a trivial demonstration.

In addition to this, the concept of secondary socialization is used to illustrate groups characterized by more targeted and restricted social relations in, for example, in schools, in the office or the place where I was assigned to work in and volunteer organizations where I belong.

Again, secondary socialization often takes place in secondary groups, mainly outside the family circle, which provide more limited knowledge and skills that are used to fulfill specific social roles. In these groups socialization is generally more formal, even if secondary groups also offer a great deal of informal learning. Besides receiving instruction on how to do their job according to the work description, just like when I was a newcomer in the office, I had to learn, for example, where to sit during the lunch break, in order to keep up with the role they have been assigned.

Franzini et al., (1978, p. 313-314) illustrate how modeling and conditioning influences are brought to bear on young people, both within the family (primary socialization). Boys and young men (where I am included) learn to be more dominant and aggressive, and aspire to “male” occupations such as business, engineering and the sciences. Girls and young women learn to be more passive and nurturant, and aspire to “female” occupations such as teaching, social work and nursing.

In this area, there is a difference between sociology and at least some disciplines within psychology. Some schools of psychology have emphasized the effects that primary socialization have for our choices later in life. Several sociologists will argue that socialization during the adult phase has a great effect. This view will allow us to claim that not only do parents socialize their children, but children also socialize their parents. For example, may religious parents have changed their views on issues such as marriage and morality, especially cohabitation and homosexuality (observed from the siblings of my neighbors), and the agents of socialization have often been their own children.

FURSETH, I. & REPSTAD, P. (2006) An Introduction to the Sociology of Religion, England, Ashgate Publishing Limited. 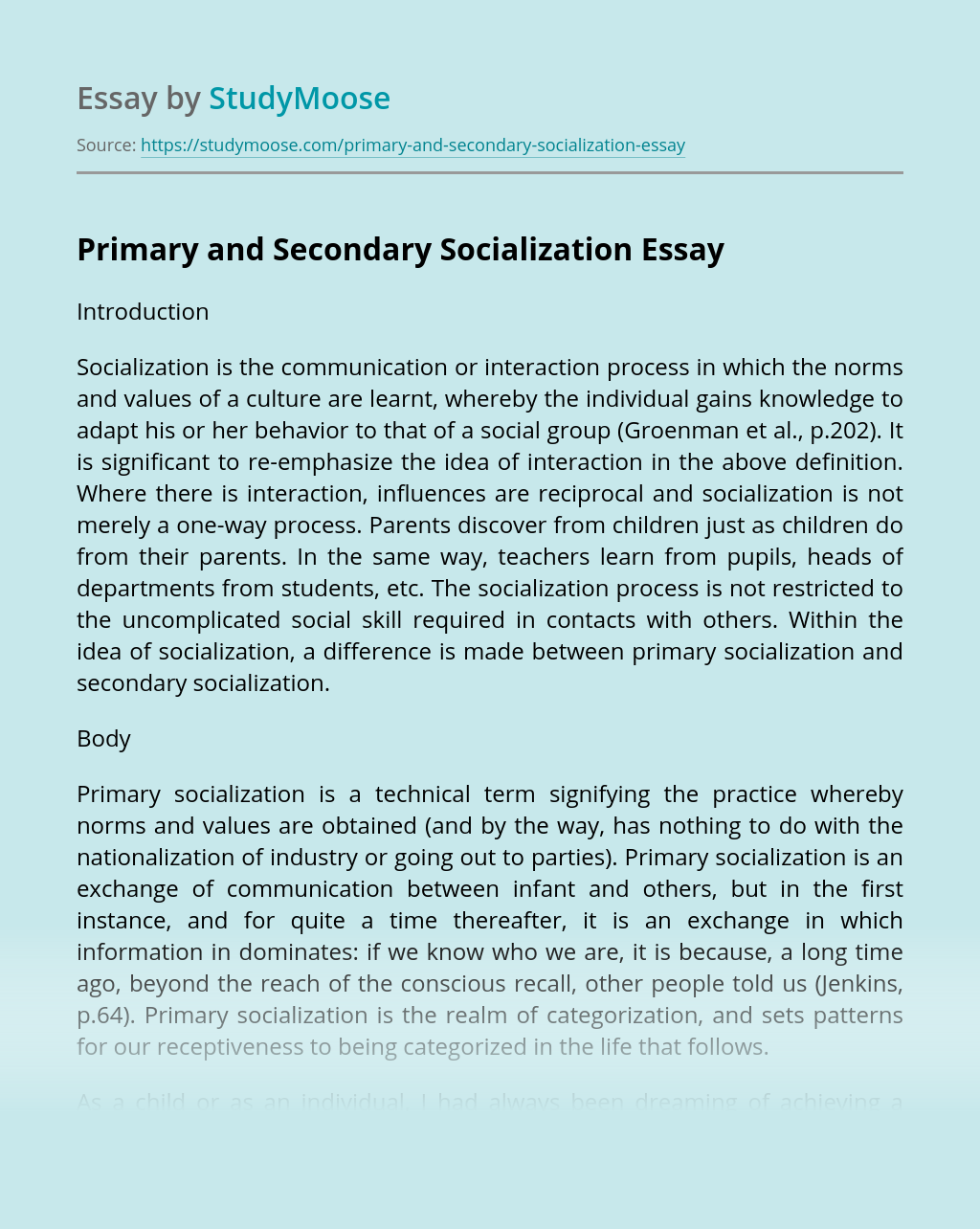