Freedom Our fore fathers fought for political freedom from the tyranny of England and its kings. Slaves fought for freedom and equality. Women fought for the freedom from their stereotypical “wifely duty” and their right to vote. We now are beginning to see freedom, due to the World Trade Center Disaster, being redefined and more defined. Young Americans of the past saw freedom differently than young Americans of today. The pampered youth of today’s society use freedom in regard to getting a car or getting to buy new clothes.

Freedoms to colonial young Americans were not so petty. They were a big part in helping our country break free from England and to them being free from the religious restraints of their day were freedoms celebrated, not just getting name brand clothing. I believe, as Americans, we are free but our freedom comes with responsibility that should not be taken so lightly. Maybe we have lost view of what freedom truly is and what it is meant to do.

Freedom has a wide range of application from total absence of restraint to merely a sense of not being hampered or frustrated in decisions one makes in life. We have, for some time now, taken our freedoms for granted. The freedoms from one state to another or one country to another differ greatly, making a true definition of the word unclear. People throw the word freedom around as if it is not something of importance. Millions of our fellow Americans have died and millions more put their lives on the line daily so we can have the freedoms we have now.

Freedom is defined as the absence of necessity, coercion, or constraint in choice or action. Given this definition, many of the places we use the word freedom or the sense of being free are very misused. Freedom is not a new outfit or a new car. Advertisers have used freedom to describe their products or the feeling that their product would give you but that does not mean that just because you wear or drive their product, you are not more free than you were before. For example, running down a wet street alone in Nike shoes does not make you more free. Freedom has been used so unrestrictively socially that many Americans have forgotten what freedom really means. People use the word freedom to describe everything and to use as an excuse or reason behind many terrible things they do. Freedom is not an excuse for abusing your neighbor who is different from you.

Freedom was fought for to make life better, it was not created to be used to alienate, abuse, or hurt people. When abused, either in protest or in life in general, we cause others to be hurt or killed. For example, in protests today people burn the American flag, our symbol of freedom, to make their point. Veterans of our Armed Forces and every patriotic American are hurt by this. The amount of blood that was shed so we could have our flag and our freedom being taken so lightly is a shame. Freedom fighters in our history who wanted to abolish slavery or desegregate communities were killed because they fought for freedom from slavery because they believed that freedom would make them equals.

Some groups today, using freedom as a mask, are fighting to take away our freedoms or to limit them more. Cults using freedom of religion as a mask persuades people to leave their hoes and family and live in their communities. They get their followers to give up their freedom for the good of their religion and even to kill themselves and others. Pro-lifers picket abortion clinics trying to get people to change the law allowing women’s freedom of choice using freedom of speech as their mask. These freedoms are for our common good as a nation not to get everyone to be what someone else wants.

True freedom is an unrestrained and unrestricted right, with this in mind, are we truly free? Yes, we are free but we are expected to use our freedoms with responsibility and the good of our country as a whole when we act out using freedoms we have. All freedoms in our constitution and life have limitations for the protection of the good of society and the good of our nation. We have the freedom to bear arms but without the proper permit, one can not carry that gun on their person out into the world to cause harm. We have the freedom of speech but with the limits set so we can not slander or defame another person without being punished.

We teach our children as they get more freedom that there are consequences for abusing their freedoms. Maybe Americans need a reminder of the consequences associated with abuse of their freedom. It is now being said by political critics that the tragedy of September 11 is our wake-up call. That this tragedy was the world’s way of telling us that our freedoms are at risk and that we should keep our democratic ideas to ourselves. Maybe now that people have to leave earlier to take a flight so their baggage can be checked more carefully and now that UPS will open and look in every box we want to send, Americans will look upon their freedoms with a little more thought not lightly glancing and taking them for granted.

As Americans, we must teach our children about freedom so that the future generations will not take their freedoms for granted or abuse them. When a baby is born they have no freedom since they can not even walk, talk, or eat without help. As they grow, they get more freedom and we guide them with discipline so they know right from wrong and good from bad. They know not to call names, to respect the flag, and to appreciate others for their differences rather than hate them or hurt them, when their parents guide them as they grow. Without this guidance children will get worse and worse every generation. They will take their freedoms for granted more and abuse them worse. I teach my children that the American flag is a reminder of all those lost in battle and that it represents our country.

They know freedoms are important and that not everyone in the world has them so they should appreciate them, not abuse them. They respect the flag and the freedoms that it represents. We do not use our freedom of speech to make fun of others who may be different from us or to say things that may hurt other people’s feelings. As a parent and role model to younger generations, we must all do our part to make them understand about freedom and responsibility. If they are making fun of someone for being different, they are punished or if they abuse someone else for being of a different religion, they are punished. This is the beginning of learning about freedom, responsibility, right and wrong, and consequences of their actions. My children know the Pledge of Allegiance even though they do not say it in school anymore, as they should. If kids were reminded daily by saying the Pledge, they would know to respect it and the freedom it stands for.

In many countries, they have no freedom. They can not speak out against a government when it is wrong, they must be the same religion as everyone else, and they can not even choose whom they marry. In our country we can do all of these yet many people still think it is so bad here. We do not have
to worry about only being able to have one child or that our parents can pick our husband when we are born. Our freedoms let us do what we want within reason. I think the limitations are more common sense than anything. Like it says in the Bible, do unto others as you would have them do unto you. Do not slander someone else or their religion. Do not abuse your neighbor for differing opinions or skin color. Do not try to force others to your lifestyle or way of thinking. Don’t do anything to another American that you would not like them to do to you.

Our fore fathers would be disgusted to see the abuses of freedom and lack of responsibility in using those freedoms in today’s world. They did not fight and die for us to destroy our country, our fellow countrymen, or our planet. So when you think of freedom, picture the American flag flying over the rubble that was once the World Trade Center or picture the American flag swaying over as a soldier wounded in battle carries it. Freedom is not a word to use lightly. It is a word that comes with responsibility and that is important to our country. Say it when you meant it and when you are showing respect to those who have given their life so that you can say it every day. 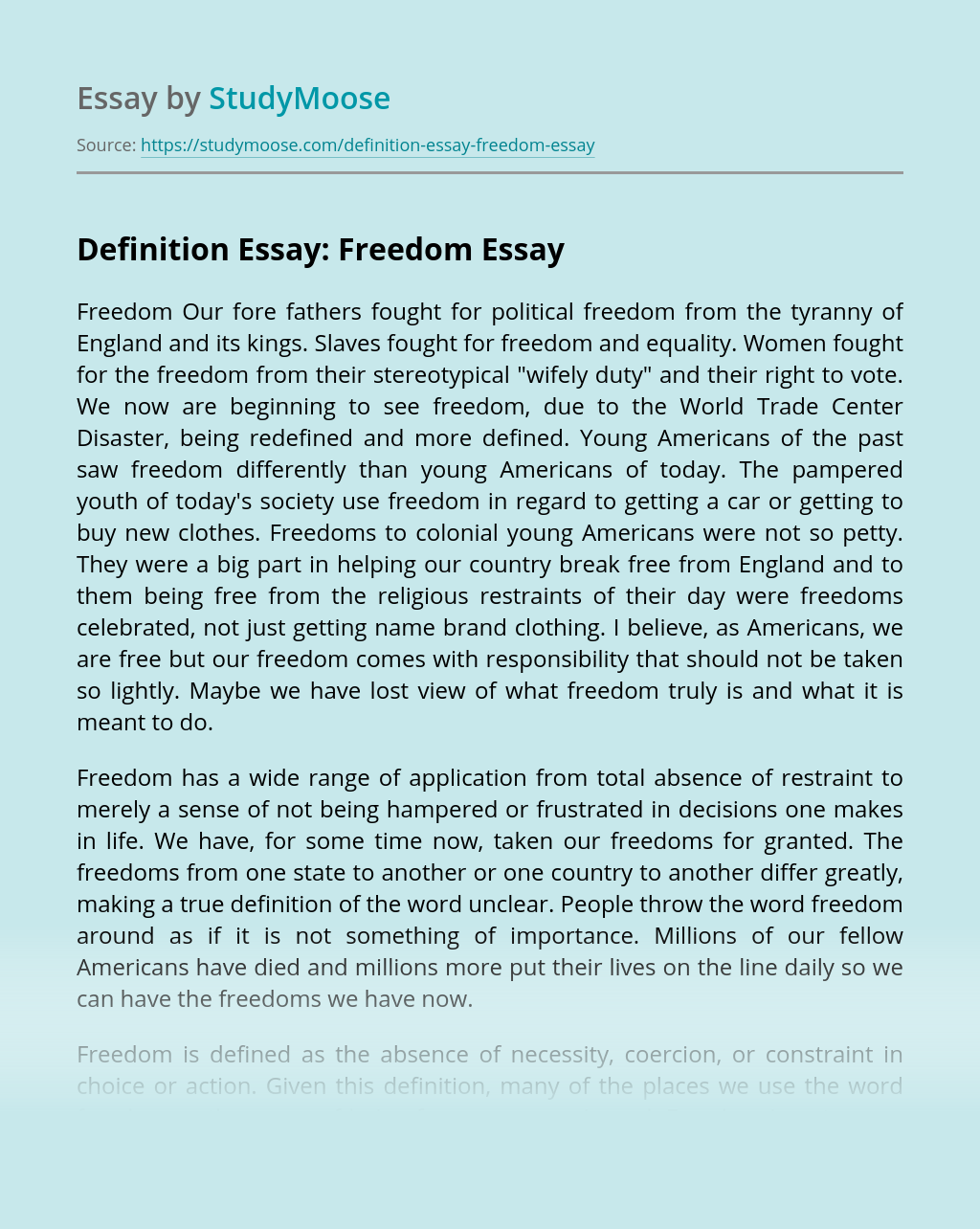